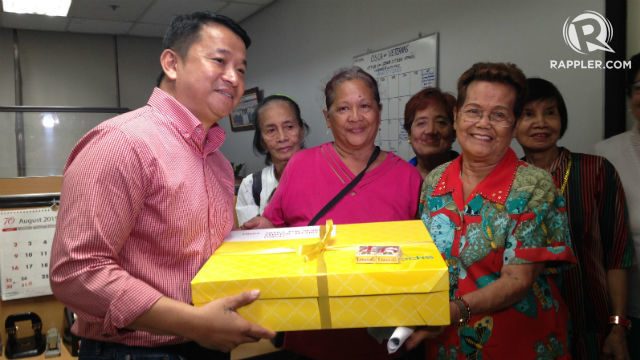 MANILA, Philippines – The local government of Makati is set to hold a bidding conference for the new supplier of its free birthday cakes program for senior citizens.

The bidding conference will be held on Monday, August 10, at the Pio del Pilar Conference Room, 21st floor of the Makati city hall. Deadline of submission of bids is at 1:30 pm, to be followed by the opening of bids at 2 pm.

According to Makati’s Bids and Awards Committee, the approved budget for the contract is at P9,356,100.

According to Peña, a monitor will be set up at the city hall lobby and representatives from various sectors are invited to monitor the process.

Makati’s cake-giving program became the subject of controversy in August 2014, as the Binay family was accused of rigging bids for city projects and accepting kickbacks in return.

Bondal alleged that the cakes were bought at P1,000 each, but the city government said the actual price for each cake was only P306.75. (READ: Why Makati seniors want Junjun Binay in city hall)

Cups & Mugs Kitchenette and Catering Services, owned by Kim Tun Chong, was the supplier of the birthday cakes until February 2014. However, the company was allegedly a front for the Vice President. (READ: BIR files tax evasion raps vs Makati cake supplier)

The Binays have denied all the allegations, saying that the ongoing Senate investigation on the contracts behind several Makati projects is an attempt to botch VP Binay’s bid for the presidency in 2016.

However, the granting of the final bidding contract was put on hold when elected Vice Mayor Peña was sworn as acting mayor of the city, following the slapping of a 6-month preventive suspension order on Mayor Junjun Binay.

Peña, with the help of sponsors he has not named, has been personally purchasing the cakes until the selection of the winning bidder as cake supplier. – Rappler.com