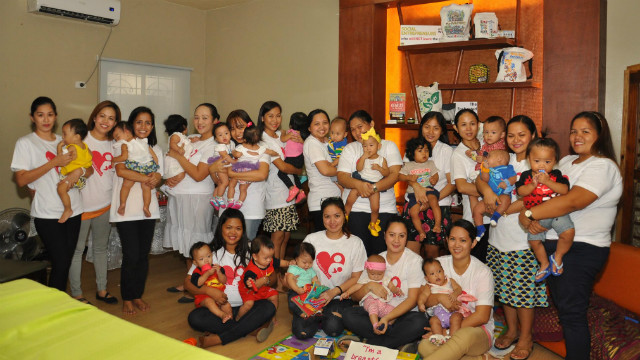 MANILA, Philippines – What better way to celebrate the National Breastfeeding Awareness Month than to showcase the importance of breastfeeding?

Breastfeeding Pinays organized the 3rd Hakab Na! to kick off the celebrations together with breastfeeding families, lactation experts, peer counsellors, and advocacy supporters.

The event aimed to boost awareness of the health and economic benefits and the importance of providing proper support to breastfeeding mothers – ultimately to create a breastfeeding nation – for the sake of future generations.

A total of 1,681 mothers across 18 locations nursed 1,699 babies and toddlers all at the same time for a minute on August 1 to signal the effect of breastfeeding mothers in the Philippines.

This is in line with the international event, “The Big Latch On”, where mothers latch on their babies from different locations around the world that set a record of 14,899 children breastfed at the same time.

Hakab Na! 2015 also gathered the mothers who have been supporting each other through the online forum, “Breastfeeding Pinays.”

Despite meeting for the first time during the event, several mothers felt like they had known each other for a long time already.

“I reconnected with an old friend through breastfeeding and it was nice to see both of us enjoying the experience of breastfeeding,” Carl Biolena, a mother of two, said. “I was also able to finally meet online friends in the flesh,” said Carl who attended in Shaw.

The Facebook group – with over 55,000 mothers – also served as a support group for those who are having a hard time breastfeeding. According to Carla Santos, she feels happy she was able to share and inspire others.

“I gave birth naturally and have been breastfeeding since day one and this is why I have a smooth recovery,” Carla said while breastfeeding her newborn and 4-year-old child at the same time. “Many mothers remember my sharing in the forum of my gentle birth and told me they were inspired.”

But beyond sharing tips, the passion of mothers when it comes to protecting and promoting breastfeeding was ignited even more.

Mother of two, Jessica Tolentino, is grateful for Hakab Na! for reminding her about the big advocacy she is part of – not just for her own children but even for the millions suffering from nutrition problems.

(The best part about my joining Hakab Na is seeing that I am part of pushing an advocacy that is fighting for something that is so important. Before I was just like a cold candle. When I attended Hakab Na, I felt the fire of advocacy again.)

It is never too early to start imparting best practices to children, new mother Melina Brazil said, if it means securing a healthy future for them.

“At a young age, she is involved in a campaign that would create a positive impact on her life and on the lives of many, especially those mothers and children who lived in poverty who came to the event,” she said.

Hakab Na! events throughout the country saw mothers and children from all walks of life, proving that breastfeeding advocacy cuts across socioeconomic classes.

“I was also overwhelmed with emotion when I was lining up to register with mothers from a resettlement village or Typhoon Sending survivors,” Melina said. “They walked all the way to SM-CDO to attend the event and show their conviction for breastfeeding.”

Rosana P. Macachor is a breastfeeding mother of one, a child’s rights advocate, and a member of Breastfeeding Pinays.

August is the National Breastfeeding Awareness Month! Do you know any initiative to promote breastfeeding in the country? Tweet and tag @rapplerdotcom and #HungerProject!