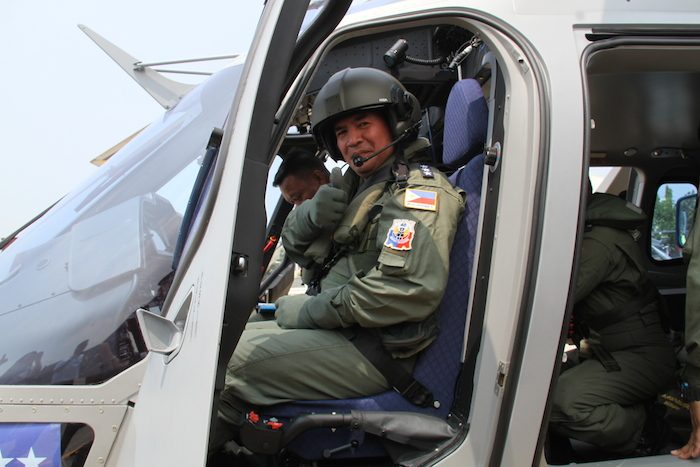 A veteran combat pilot himself, Delgado flew a AW-109E attack chopper from the PAF headquarters at the Villamor Air Base in Pasay City to the 15th Strike Wing headquarters in Cavite.

The Italian chopper manufactured by Agusta Westland, one of the first two that have been delivered, is armed with a 50-caliber machine gun and a rocket. It is almost similar to the naval choppers that were commissioned last week. Six more are arriving within the year.

This short video clip showcases the first flight of 2 AW-109E Attack Helicopters into Danilo Atienza Air Base at Sangley Pt, Cavite, the home of 15th Strike Wing after the formal acceptance ceremony held at Villamor Air Base last August 17, 2015. A water cannon salute was rendered to the Commanding General of the Philippine Air Force, Lt Gen Jeffrey Delgado who personally flew the lead aircraft with his call sign, “Stallion 240.”

A total of 10 brand new choppers were formally turned over to the Air Force on Monday.

“He was a pilot of combat aircraft and attack helicopters of 15th Strike Wing and a Wing Commander, 15th Strike Wing from 1988-1994,” said PAF spokesperson Lieutenant Colonel Enrico Canaya.

Delgado was the commander of the 15th Strike Wing, qualified to fly both fixed-wing combat aircraft and attack helicopters. He was Armed Forces deputy chief of staff for plans (J5) before he became Air Force commanding general.

More air assets are arriving within the year including the first 2 of 12 FA-50 fighter jets from South Korea, the two other C-295s, and the rest of the AW-109 attack choppers. – Rappler.com