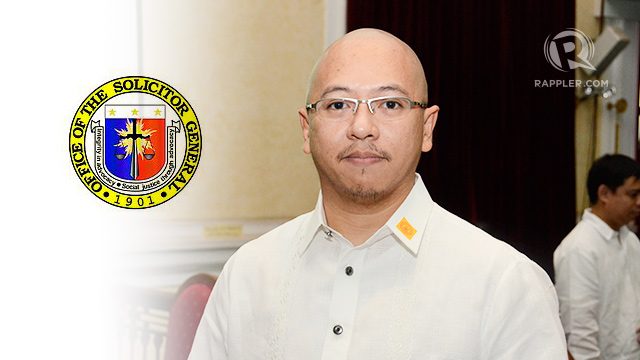 Facebook Twitter Copy URL
Copied
The Solicitor General says continuing to represent the NHCP would compromise the 'statutory duty to articulate a legal argument that will best serve its ultimate client, the Republic'

MANILA, Philippines – The Office of the Solicitor General (OSG) will no longer represent the National Historical Commission of the Philippines (NHCP) in the case filed before the Supreme Court (SC) against the controversial Torre de Manila construction project.

In a 5-page manifestation, Solicitor General Florin Hilbay said the OSG has dropped the NHCP as its client because continuing to represent it would compromise the “OSG’s statutory duty to articulate a legal argument that will best serve its ultimate client, the Republic.”

The OSG represents government respondents NHCP, National Commission for Culture and the Arts (NCCA), and the National Museum (NM) in the petition filed by the Knights of Rizal seeking to stop the construction of the high-rise building because it mars the sightline of the historic Rizal Monument.

In a position paper dated July 30, the OSG declared the Torre de Manila “illegal” and said that there was legal basis to stop its construction – a reversal of an earlier stance in January.

This did not sit well with NHCP Chair Maria Serena Diokno, who slammed the OSG for backtracking on its position in a letter dated July 29.

Diokno claimed that the OSG had assured the NHCP it will be “cleared of responsibility” because there was “clearly no sufficient legal basis” to compel the NHCP to issue a cease and desist order against the project.

She also said they did not have time to seek other counsel because the cultural agency was informed of Hilbay’s new position only a few days before the second round of oral arguments before the High Court.

But Hilbay said that the NHCP, NCCA, and NM were informed of the OSG’s new position on the case.

In his manifestation, Hilbay said the duty of his office is to “uphold the interest of the government and the people even in the face of an adverse client agency’s position.”

“Thus, when an agency, as an immediate client, recommends a position to the OSG that is contrary to the interest of the government, the OSG can decline representing the agency,” he added.

The NHCP has asked the SC to allow lawyers Jose Manuel Diokno and Jose Dalisay III to stand as counsel of the NHCP in the case. – Rappler.com