Victor Limlingan: I don’t know where my brother is 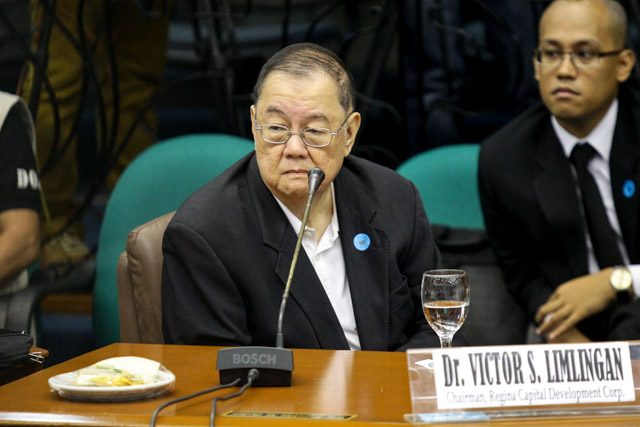 His brother, Victor, told the Senate blue ribbon subcommittee hearing on Thursday, August 20, that he does not know.

According to Victor, Gerry had not been in contact with him or any members of their family since the Senate started investigating the allegations that Gerry was cornering hundreds of millions of pesos in contracts yearly for the Makati city government. (READ: Binay’s ‘dear friend’ got P1.3B contracts in 4 years)

“I really don’t know where he is,” said Victor.

Victor said that after his brother was shot in 2010 in what the Vice President believes was a “politically-motivated” ambush, Gerry had become more conscious of his safety and security.

Gerry, “a very dear family friend” of the Vice President, acted as Binay’s campaign manager and finance officer in the 2010 elections.

“Since then, my brother has always been security-conscious. Our arrangement is if he needs any help, he will call me, but he hasn’t called me…. That is his decision, not mine. I am not going to take the initiative to look for him,” said Victor.

Senator Antonio Trillanes IV, however, said he does not believe Victor’s testimony because he does not seem to be worried about Gerard’s status.

“Kung mayroon kayong malasakit sa inyong kapatid, kumbinsihin ‘nyo siyang [pumunta sa hearing],” Trillanes told Victor. (If you care about your brother, you will convince him to come to the hearings.)

“Mare-redeem niya ang pangalan ng [mga] Limlingan…. Kasi ngayon parang [ang pangalang] Limlingan ay parang synonymous na sa [salitang] ‘dummy,’” said the senator, adding that the subcommittee could even provide protection for Gerry. (He will be able to redeem the Limlingan name because now it appears to be synonymous with the word “dummy.”)

Asked if he believes Gerry is still alive, Victor replied: “I guess. I cannot be sure. I haven’t received any call from him.”

While Victor said he is worried about his brother, he will respect their prior arrangement that it would be Gerry who will contact him first.

In May this year, the Senate ordered the arrest of Gerry and 13 others for “repeated refusal to appear before the committee investigating the questionable transactions involving the construction of various government projects, which allegedly involved Vice President Jejomar Binay and Makati City Mayor Junjun Binay.”

“Sa aking pagkakaalam, sakitin din ho iyong taong iyon. Kaya sa malamang, hindi ho talaga, mahihirapan hong sumipot iyon doon,” he added. (As far as I know, he is sickly. It will be difficult for him to show up.)

The former Makati mayor was no longer invited to the hearing but instead attended a Mass in Amapola Street, Barangay Pembo, in Makati to mark the one-year anniversary since the Senate probe into him and his family began. During the hearing, National Bureau of Investigation (NBI) Director Virgilio Mendez said they have searched for Gerry but failed to find him.

“Efforts have been exerted on this. The whole division of the intel services has been assigned, but we regret to inform you that the efforts yielded negative results,” Mendez said.

However, he assured the subcommittee that the NBI will continue looking for Gerry.

Senator Aquilino Pimentel III, who is leading the Senate investigation into the corruption allegations against the Binays, called for a “national manhunt” for Gerry.

“Where in the world is Gerry Limlingan? According to the Bureau of Immigration, there has been no record of his departure from the country. If he is in the country, why is he hiding rather than defending himself and his family’s name? Or is he held against his will and thus unable to come forward?” Pimentel asked at the start of Thursday’s hearing.

The senator said the Senate blue ribbon subcommittee needs to find Gerry and hear his testimony before terminating the ongoing probe, one of the longest in Senate history. – Rappler.com