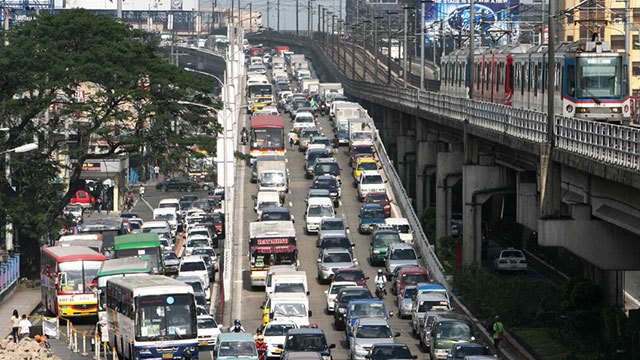 Facebook Twitter Copy URL
Copied
A congressman renews proposal to sell cars only to those with proof of parking spaces; an ex-senator says factories, commercial establishments should move to the provinces

MANILA, Philippines – With traffic in the metropolis worsening, a lawmaker and a former senator have pitched proposals to alleviate the burden suffered by millions of Metro Manila motorists every day.

Valenzuela City Representative Sherwin Gatchalian on Monday, August 24, renewed his call to regulate sales of brand new cars only to those who have enough parking spaces in their homes or offices.

In 2014, Gatchalian filed House Bill 5098 or the “Proof of Parking Space Act,” which would require potential car buyers to first prove that they have their own parking space before they are allowed to buy a new vehicle.

“The road congestion in Metro Manila is worsened by the idle vehicles parked on the sides of streets, which hamper the flow of motor vehicle and foot traffic. This can be solved if car owners have their own parking spaces,” Gatchalian said in a statement.

A report from the Chamber of Automotive Manufacturers of the Philippines and the Truck Manufacturers Association showed that the automotive industry hit the 60,000 mark in sales during the first quarter of 2015 alone.

Gatchalian said regulating car sales will help ease the traffic jams that cost the Philippines P2.4 billion a day, according to a study by the Japan International Cooperation Agency (JICA).

If left unsolved, JICA said the Philippines can incur productivity losses that could amount to P6 billion a day by 2030. (WATCH: The cost of traffic in Metro Manila)

In his statement, Gatchalian also took a swipe at Interior Secretary Manuel Roxas II for implying that Metro Manila’s traffic problems were a good sign of economic prosperity.

In a speech in Cebu last August 12, Roxas said traffic was a “high-class problem” that reflects economic activity and prosperity.

He noted that 260,000 vehicles were added in 2014, and 300,000 more projected this year. Roxas added that when he was the secretary of the Department of Trade and Industry a decade ago, sales of 60,000 vehicles on the road already meant a “big year.”

“Traffic is a problem. From my point of view, it is a high class problem. Why is it a high-class problem? Because traffic is a reflection of the 260,000 vehicle addition last year to the number of cars on the road,” Roxas said.

Gatchalian, however, said Roxas’ statement was a poor excuse for the monstrous traffic jams in Metro Manila.

“Secretary Roxas’ analysis of the horrendous traffic being a sign of economic growth is twisted. Such interpretation is unexpected of Roxas, who used to be the secretary of the [Department of Transportation and Communication],” Gatchalian added.

Meanwhile, former Senator Richard Gordon has a different proposal for easing traffic the national capital region: relocate factories, commercial establishments, and other industries to the countryside.

Not only will this decongest Metro Manila, it will also generate new jobs and boost the local economy of nearby provinces, Gordon said.

“There are plenty of vast and open lands along highways. If we build factories and other industries there…. There will also be a demand for housing. Get schools and hospitals to open branches there and new communities and towns will be created,” he said in a statement.

“The move will generate jobs, not only for the residents of Metro Manila but also for those in the nearby provinces. The construction boom alone will open a lot of jobs. That way, people will just bicycle to work and the students to school,” Gordon added.

The former senator also said that the government should focus on maximizing the use of existing infrastructure, such as airports, seaports, and highways, to encourage investors and economic development. – Rappler.com