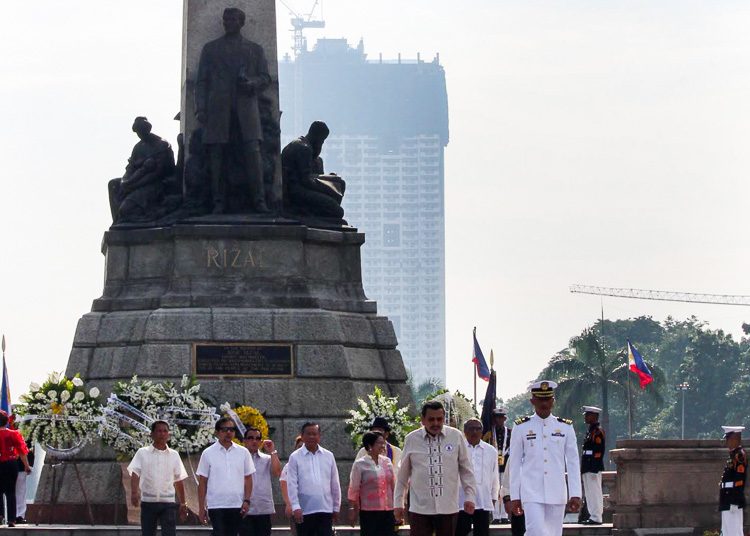 Facebook Twitter Copy URL
Copied
The Solicitor General has dropped as client the National Historical Commission of the Philippines, which says its guidelines do not provide a legal standard for them to stop Torre de Manila
MANILA, Philippines – Chief Justice Maria Lourdes Sereno hit the Solicitor General for going against the interpretation of the National Historical Commission of the Philippines (NHCP) on its own guidelines regarding the preservation of monuments.
During the 5th round of interpellations on the petition against the Torre de Manila condominium on Tuesday, August 25, Sereno questioned the decision of Solicitor General Florin Hilbay to drop the NHCP in the case and take on a stance contradicting its former client.
In July, Hilbay declared the Torre de Manila illegal for affecting the physical integrity of the historic Rizal Monument. He added that there was legal basis for the NHCP to stop the construction of the project because it violates constitutional provisions on the preservation of cultural heritage.
It was, however, a reversal on Hilbay’s own position on the controversial 49-story building.
In his new position on the issue, the Solicitor General cited the 2011 NHCP guidelines that said national monuments should be given prominence, and that “vista points and visual corridors” should be unobstructed.
The NHCP, however, said in a November 2012 letter to project developer DMCI Homes that, as Torre de Manila sits outside the boundaries of the protected Rizal Park, “it cannot possibly obstruct the front view of the said National Monument.”
“If the NHCP itself does not believe that the guidelines provide a legal standard for them to act, what gives you the legal authority to say that it provides a legal standard when the NHCP itself does not?” Sereno asked Hilbay during the 4-hour interpellation on the case.
Sereno pointed out that the NHCP is the cultural agency that has the constitutional mandate to make pronouncements on the Rizal Monument, but questioned why Hilbay chose to adopt a contrary stance.
“It is only the NHCP that has a direct bearing on the matter and yet you disregarded its opinion and adopted an opinion that is very different. Are you always in the process of doing that?” she asked the SolGen.
Hilbay said that it was not the first time that his office has adopted a contrary stance from its clients. He explained that his office does so “when required.”
Plain reading of guidelines
In his argument before Supreme Court justices, Hilbay urged the court to adopt a less restrictive interpretation of “physical integrity.”
Section 25 of Republic Act 10066 states that appropriate cultural agencies may issue a cease and desist order against any activities affecting a cultural property when its physical integrity is “found to be in danger of destruction or significant alteration from its original state.”
In his opening statement, Hilbay argued that the physical integrity of the Rizal Monument should necessarily include its sightline, and asked the court to choose a “broad and rational” interpretation instead of a “restrictive interpretation.”
But NHCP Chair Maria Serena Diokno, in a July 29 letter addressed to Hilbay, said the cultural agency chose to read Section 25 “and understand it exactly as it is stated.”
Sereno told Hilbay that under the rules of statutory interpretation, the ordinary and plain meaning of the law is applied.
“Your former client is saying that we read Section 25 as it is. Under the rules of statutory interpretation, when the provision of the law has plain meaning, then you apply plain meaning. You are asking this court to define physical integrity as something else,” Sereno said.
The chief justice added: “Here you have a cultural agency reading the law as it says. What gave you the basis to tell NHCP that it is wrong?”
In response, Hilbay again said that interpretation of heritage laws should be taken in the context of the practice of conservation.
“What we are saying is that the law was passed in consideration of the practice of conservation. The practice of conservation covers, in some cases, the protection of the sightline,” he argued.
Arbitrary?
The chief justice also questioned Hilbay’s decision to change his stance based on the influence of two private individuals.
In a Facebook post, Hilbay had explained that two individuals gave him the “inspiration”  for his new position.
“So you just laid bare to us that you were spurred by the influence of two private individuals who derived their authoritativeness not from the law, but from their own progressive perspective. Is that a correct position for the Solicitor General to make?” Sereno asked.
She also told Hilbay to justify why he dropped the NHCP as a client, and to make clear before the court how it determines when it exercises its discretion.
“We want to prove that this is not arbitrary on your part,” she said.
This was also the same point raised by Senior Justice Antonio Carpio, who said it was “strange” that the Solicitor General has dropped the NHCP but continues to represent the National Commission for Culture and the Arts (NCCA) despite disagreeing with the cultural agency’s stance on whether it has the power to issue a cease and desist order against Torre de Manila.
The NCCA issued the order in January, but

DMCI and the other respondents in the case have questioned whether it has the jurisdiction to issue the order.

Questioning Hilbay on the possible breach of ethics in this case, Carpio commented: “This is very strange. You are representing NCCA but taking an opposite position.”
While maintaining that the Solicitor General is bound by the rule of legal ethics, Hilbay said that the NCCA will file its own memorandum on that particular question.
The SC will continue hearing oral arguments on the Torre de Manila case on Tuesday, September 1. – Rappler.com