How Binay ‘dummies’ cornered Makati contracts for a decade 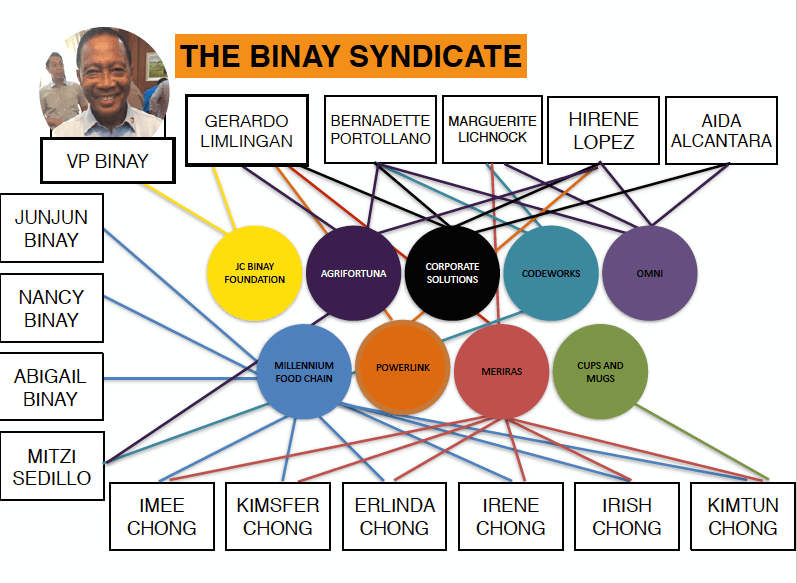 MANILA, Philippines – Alleged dummies of Vice President Jejomar Binay cornered the bulk of Makati’s IT, janitorial, and security services worth P5.6 billion ($120 million) by running the same companies that won bids in the span of almost a decade.

This is the “initial finding” of a review of Makati’s service contracts that the leadership of Acting Makati Mayor Kid Peña ordered.

In a Senate hearing on Wednesday, August 26, Lazo said she spotted the following “red flags” in the projects:

Lawyer Renato Bondal, a political rival of the Binays in Makati, identified the incorporators of the two firms as supposed dummies of the Vice President linked to past anomalies raised in the Senate inquiry. He said the Anti-Money Laundering Council (AMLC) froze their bank accounts along with Binay.

Calling the group “Binay syndicate,” Bondal said: “It’s just the same names. Their papers just go around in circles. Sometimes, the person would be a chairman, treasurer, or president.” 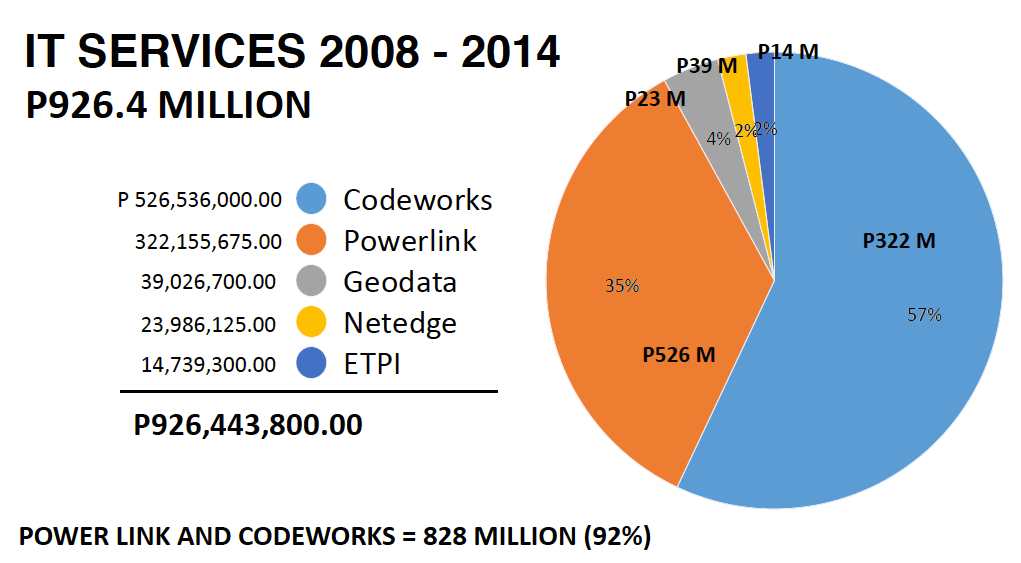 Lazo said that in the bidding, Omni often competed with Vican Investigation and Security Agency Inc. Her department found that Omni director Aida Alcantara was also the corporate secretary of Vican. She called this a “clear case of collusion.” Lazo cited a secretary’s certificate to show that Corporate Solutions had a board meeting about participating in the bidding for the East Rembo Multi-Purpose Hall and Cembo Health Center on October 17, 2013, or a month before the invitation to bid was published on November 13, 2013. “The prospective bidder was given advanced information,” Lazo said.

The hearing is the 24th in the year-long Senate inquiry into corruption allegations against Binay and his family. The opposition standard-bearer, Binay rejects the investigation as a tool of his political detractors to derail his presidential bid.

The Vice President faces various plunder complaints and investigations over alleged bid rigging, and overpricing of Makati projects when he was mayor of the financial center for 21 years. Binay was Makati mayor until 2010 while his son, Makati Mayor Jejomar Erwin “Junjun” Binay Jr took over but was suspended in July for alleged plunder and graft.

Senator Antonio Trillanes IV said that Binay and his alleged dummies supposedly earned roughly P2 billion ($40 million) from the Makati contracts, up from his initial estimate of P1 billion ($20 million).

Without providing specifics, the senator said 20% of the cost of IT projects went to salaries and taxes, while 80% or P700 million ($15 million) was Binay’s kickback.

Trillanes then added this figure to the amount that former Makati city bids and awards vice chairman Mario Hechanova provided. Hechanova testified that Binay supposedly got a kickback of P1.26 billion  ($30 million) from the janitorial and security services.

Hechanova said the amount included the money given to ghost personnel, and profits. He presented a computation on a Powerpoint slide but without supporting documents.

Trillanes also questioned the expenses for the services. He said he could not understand why Makati spent P2.38 billion just for janitorial services.

“This only covers the offices of the city hall, not the whole Makati, for people to grasp the magnitude of the corruption,” Trillanes said. The amount covered contracts for 9 years.

The senator also asked why Makati needed 600 security guards, when it could have hired just 400. Hechanova responded that the number included those assigned to Binay’s house, and to his supposed secret Batangas estate, the so-called Hacienda Binay.

Ahead of the hearing, Binay’s spokesman Joey Salgado said that the Senate inquiry involved “recycled allegations,” “outright lies,” and “dubious if not falsified documents.”

Senator Binay said her brother-in-law Jose Emmanuel Angeles divested his shares from the firm back in 2006, and should not be dragged into “maliciously manufactured controversies.” Angeles was an incorporator and president of Triforce Security.

(It saddens me that every time I speak up about this issue, they raise these allegations with only one motive)

The Senate plans to continue the inquiry until authorities are able to find Limlingan. – Rappler.com