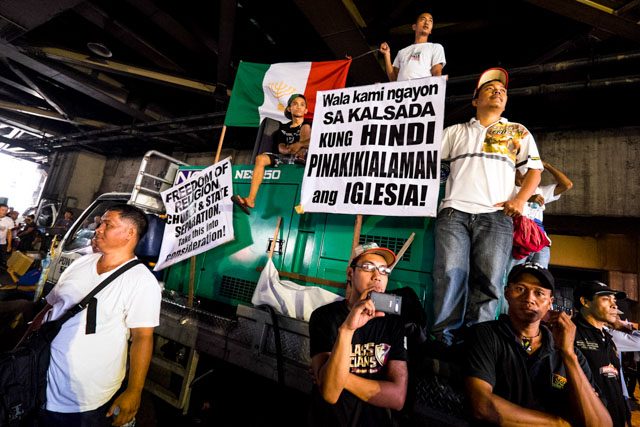 MANILA, Philippines – The Catholic Bishops’ Conference of the Philippines (CBCP) on Sunday, August 30, urged Catholics not to make “inflammatory statements” against the Iglesia ni Cristo (INC), as the bloc-voting church holds a days-long rally.

“Be charitable at all times and in all circumstances,” CBCP president Lingayen-Dagupan Archbishop Socrates Villegas said in a statement.

Villegas said: “Jesus, the Lord, willed His disciples to be known by their love. No Catholic should fan the flames of dissension by rumor-mongering and by inflammatory statements. Let all be kind in disposition, respectful in speech, and prudent in action.”

The CBCP president issued this statement on the 4th day of the INC’s anti-government rally that began in Padre Faura, Manila on Thursday, August 27, and is continuing in EDSA.

In his statement, Villegas also warned against political opportunism in the INC rally.

Just a day earlier, critics of President Benigno Aquino III, led by his uncle Jose “Peping” Cojuangco, joined the INC rally and brought up perennial issues against the Aquino administration.

Below is the CBCP’s full statement on the INC rally:

What do we Catholics do as our brothers and sisters of the Iglesia ni Cristo throng around the EDSA Shaw area?

We, your bishops, offer you these guidelines:

1. PRAY WITHOUT CEASING for a peaceful and just resolution of the present dispute, in a manner both pleasing to God and in conformity with the democratic convictions enunciated in our Constitution.

2. BE CHARITABLE AT ALL TIMES AND IN ALL CIRCUMSTANCES. Jesus, the Lord, willed His disciples to be known by their love. No Catholic should fan the flames of dissension by rumor-mongering and by inflammatory statements. Let all be kind in disposition, respectful in speech and prudent in action.

3. SEEK ENLIGHTENMENT. We appeal to our Catholic lawyers, jurists, and law professors to contribute to the ongoing discourse in a constructive manner, without condemnation. We seek to be enlightened on what the fundamental law of the land provides, the boundaries of the freedom of religion, and the rights and the prerogatives of State.

4. RESPECT HOLY SITES. The EDSA Shrine is a Catholic center of worship. It is a church. There is a Catholic priest assigned to it. We ask that all respect the sacred character of the Edsa Shrine.

5. ABIDE BY THE LAW. Unless it is convincingly shown that a law offends moral precepts, obedience to the law is a Christian duty. Sons and daughters of the Church cannot be less observant of the law than other citizens of the Republic.

6. NO TO OPPORTUNISM. No politician should gain political ground by abetting dissension or, worse, fostering disregard of the Constitution and the law. Neither is it morally correct for any political party to aim at gaining an advantage by controlling a religious sect known to propose to its members a chosen set of candidates.

If we turn to the Lord in sincere prayer, then, we are firm in the faith that all wounds shall be healed.