Aug 31, 2015 8:41 AM PHT
KD Suarez
Facebook Twitter Copy URL
Copied
(UPDATED) The announcement ends 5 days of protests by the religious group, which started at the Department of Justice in Manila and continued at EDSA 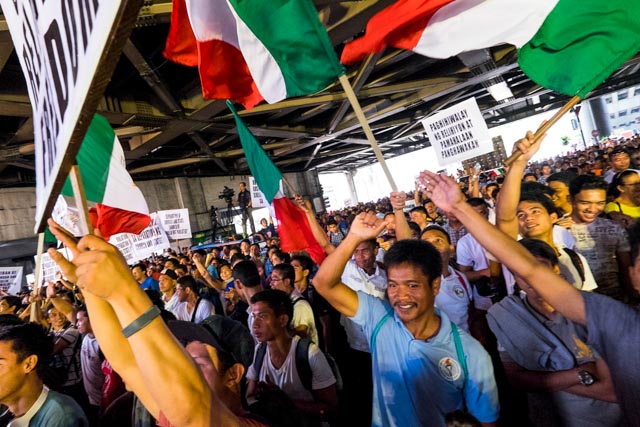 MANILA, Philippines (4th UPDATE) – The Iglesia ni Cristo (INC) on Monday, August 31, ended their 5-day protest against the government’s supposed interference with internal church matters, saying they have reached an understanding with the Aquino administration.

(We’d like to inform you all that both the Iglesia and the government have spoken to each other and clarified matters. So all is well.)

(Our peaceful gathering, which we started last Thursday afternoon, is ending peacefully this Monday morning.)

Eagle News, a news group owned by the INC, said that the religious group reached an “agreement” with the government.

“Iglesia Ni Cristo General Evangelist Bro. Bienvenido Santiago announced the end of the 5-day peaceful assembly, saying that the Iglesia Ni Cristo and the government have come into peaceful agreement,” the group said in its website and YouTube channel.

A few hours later, Malacañang, in a statement, said that “[through] goodwill and the convergence of efforts, the rule of law has been upheld.”

“We appreciate the INC leadership’s directives for the withdrawal of their members from their gathering sites,” the statement, attributed to Palace spokesperson Edwin Lacierda, said.

(In the past few days, the government quietly coordinated with the INC leaders. This became an opportunity to clarify the issues.)

Both sides, so far, have not specified what kind of “understanding” was reached.

In their vigil, Iglesia members asked government to keep its hands off the illegal detention case filed by expelled Iglesia minister Isaias Samson. They also slammed the alleged bias of Justice Secretary Leila de Lima, saying she was giving the case special attention. Samson’s lawyer Trixie Angeles said the DOJ has not even assigned a prosecutor to the case. (READ: Why De Lima is target of Iglesia ni Cristo’s anger)

The DOJ is currently investigating the alleged abduction of several of the church’s ministers and members, allegedly upon the orders of the INC leadership.

Upon learning of the announcement, protesters assembling in other major cities in the country also started to disperse.

In Tacloban, about 2,000 gathered in front of DOJ office this morning. But past 9 am, they started to disperse because “may tawag from Manila na pinagbigyan na [kami].”

In Cebu, INC members started coming in from other parts of the Visayas last night; some, 7 am. The instruction was to meet up at the INC chapel between 9 and 11 am, then march to the plaza.

They initially wanted to stage a rally at Fuente Osmeña, but city hall didn’t allow them because they would disrupt APEC activities. But before they could march, they were told the rally had been cancelled.

Cebu City Vice Mayor Edgardo Labella said policemen are continuing to monitor the security of the people who came in for the protests until they leave.

In Davao City, protesters said they got word from their church leaders to go home, after they were told that the INC and the government reached an understanding.

The protests, which started at the Department of Justice (DOJ) area last Thursday, August 27, are due to the alleged meddling of the justice department in what the religious group says are internal affairs of the church.  (READ: INC’s defeat: Actualizing separation of church and state)

In the main protest site, at the intersection of EDSA and Shaw Boulevard in Mandaluyong City, the Philippine National Police said the crowds peaked at an estimated 20,000 people around 2 am Monday. (READ: INC spokesman hits ‘low’ police estimate of EDSA rally crowd)

There were initial plans to move the protests back to the DOJ area on Monday, due to the expiration of the rally permit given by the Mandaluyong City police, but the activity was cut short by the announcement. – With reports from Paterno Esmaquel II, Mara Cepeda, Ryan Macasero, and Editha Caduaya / Rappler.com