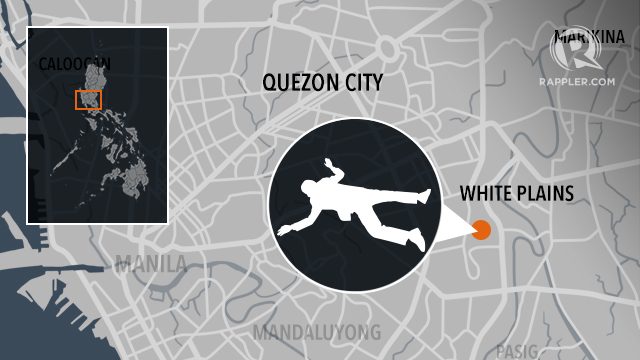 Facebook Twitter Copy URL
Copied
Authorities say the suspect began shooting at the victims' van, thinking it was sent by a drug rehabilitation center to fetch him

MANILA, Philippines – A woman was killed and at least two were injured when a man shot at their parked van in the White Plains neighborhood in Quezon City on Tuesday night, September 1.

Radyo Inquirer reported that a van bearing two men and a woman was plying Katipunan Avenue when it broke down in front of a store where the suspect, identified by authorities as Jose Maria Abaya, had parked.

Abaya reportedly mistook the white van for a vehicle of a drug rehabilitation center that was there to fetch him, and began shooting at it.

The radio report said that Marikina resident Joy Santos was killed, while her co-passengers, identified as Ronbert Azares and Duke Angelo David, were wounded and are being treated at the Medical City in Pasig.

Abaya, 50, voluntarily surrendered to authorities. He is the son of the late Police Constabulary General Antonio Abaya, and is related to former Armed Forces chief General Narciso Abaya.

Quoting Quezon City Police District Director Chief Superintendent Edgardo Tinio, the radio report said that Abaya was previously charged with homicide for shooting dead a staff member of a rehab center, who was bringing him to the facility.

The family of that victim, however, agreed to an out-of-court settlement. – Rappler.com