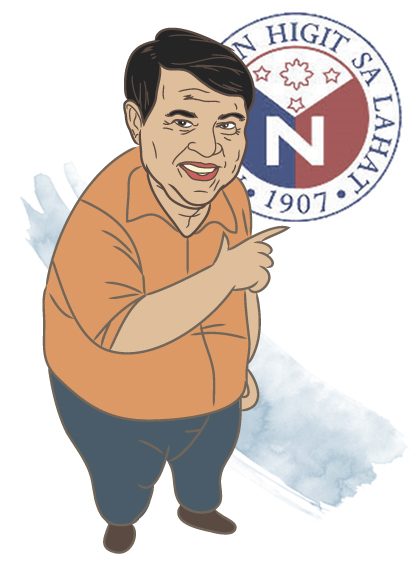 MANILA, Philippines – The man who led the impeachment of former President Joseph Estrada is quiet on Corona’s impeachment. Villar has kept a low profile since his loss in 2010 presidential race but still holds influence as head of the Nacionalista Party. It is unclear if he will support his former rival’s efforts to convict the Chief Justice.

Villar’s son, Las Piñas Rep. Mark Villar, did not sign the impeachment complaint against Chief Justice Renato Corona. However, on the first issue that senator-judges voted on during the trial, Villar voted to allow the impeachment court to summon Corona and members of his family.

Villar was Senate President but was forced to resign in 2008, with many senators withdrawing support over the C5 road project controversy he was linked to. Juan Ponce Enrile replaced him.

He is the first post-war public official to become both Senate President and Speaker of the House of Representatives.

After losing in 2010, Villar kept a low-profile. The former Senate President hardly grants interviews and has been silent on Corona’s impeachment and the cases filed against Arroyo.

As a candidate, he initially said prosecuting Arroyo was the job of the judiciary but eventually took a stronger position. In April 2010, he said the next president should run after all corrupt officials.

In an interview with the Philippine Star in December 2011, Villar was asked about his Christmas wish for Corona. He said, “It’s hard for me to give any Christmas wish without telegraphing my possible vote in the impeachment trial in January.”

Eligible for reelection? No. Villar is serving his second 6-year term and is barred by the Constitution from running for a third term. He first won in 2001 and was reelected in 2007.

Political Party: Nacionalista Party (NP) (Villar is the president of the NP.)

Villar first ran for the Senate in 2001 as an independent candidate part of the People Power Coalition that supported EDSA II. He sought reelection in 2007 under the Genuine Opposition coalition.

Before running for the Senate, Villar was a three-term congressman, representing Las Piñas and Muntinlupa. Villar was succeeded by his wife, Cynthia, and son, Mark, as Las Piñas representative.

As Speaker of the House, Villar led the impeachment of then President Joseph Estrada in November 2000. After the prayer, Villar read a resolution approving Estrada’s impeachment, bypassing a vote and ignoring attempts of Estrada allies to delay it.

Villar said a vote was not necessary because 115 congressmen endorsed the resolution, more than the required one-third of the 218-member house. ABC News quoted Villar as saying, “I did not want to be stopped on a technicality.”

Position aired and published on Corona and on issues related to the Articles of Impeachment:

Then presidential candidate Villar said he was disappointed with the Supreme Court decision allowing then President Gloria Macapagal-Arroyo to appoint the next chief justice. He said it would have been better if the next president made the appointment.

He said, “I’m saddened by the Supreme Court decision but the SC has the final say. If [an appeal] can still be pursued, we will see what can be done.”

During the campaign, Villar vowed to review Arroyo’s supposed midnight appointments if elected president. He said it was wrong for Arroyo to make appointments right before she steps down. – Rappler.com