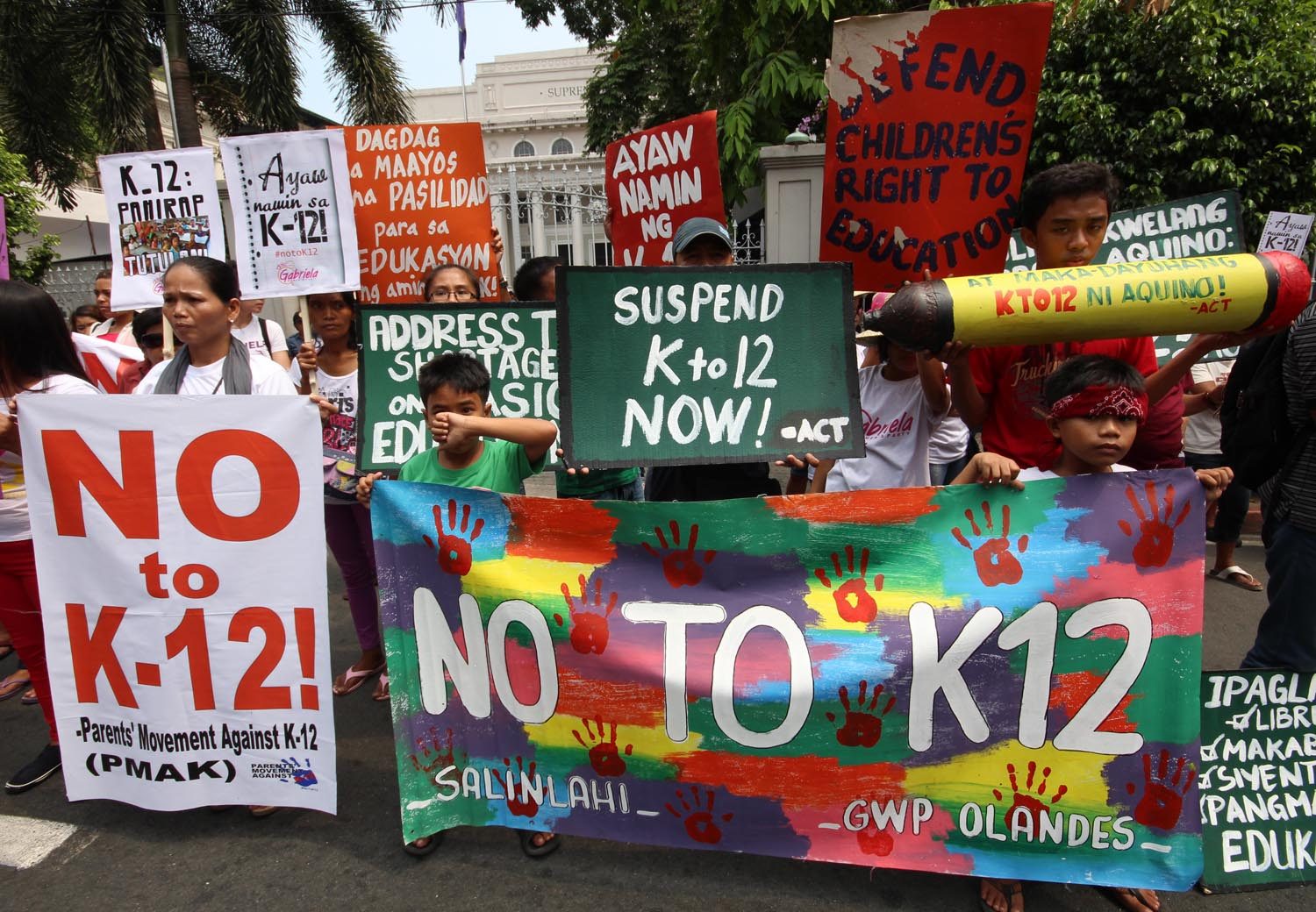 Facebook Twitter Copy URL
Copied
'The [Supreme Court] should now resolve our prayer for a temporary restraining order even without the Office of the Solicitor General's comment,' says Severo Brillantes, counsel for the petitioners

MANILA, Philippines – Critics of the K to 12 curriculum are banking on the Supreme Court (SC) as “the last bulwark of democracy” that will uphold the Constitution by issuing a temporary restraining order (TRO) on the implementation of the 2013 law.

In a motion filed before the SC on Thursday, September 17, parents and teachers from the Manila Science High School (MSHS) said, “Most sadly today, an equally reprehensible virtual dictatorship exists, with the collusion of the executive and legislative departments in the implementation of the unconstitutional K to 12 Basic Education Curriculum and the two additional years of senior high school.”

The petitioners likened the situation to the Marcos dictatorship.

“In the face of this grave injustice, the Honorable Court is the only hope of herein Petitioners.”

The petitioners believe that Education Secretary Armin Luistro “blatantly [violated] the Constitution by implementing the K to 12” without waiting for the law to be passed.

But since neither houses of Congress “registered any protest,” the petitioners called this a “tyranny of the executive and legislative departments.”

“No matter how noble the intention of the law is, it should not be achieved at the expense of the rule of law and the supremacy of the Constitution,” Severo Brillantes, counsel for the petitioners told Rappler.

This is the second motion from the petitioners asking the High Court for early resolution of its earlier petition to stop the implementation of the K to 12 curriculum, including the requirement for students to attend senior high school, or two more years in high school starting 2016.

The first motion filed on July 28 said a TRO from the SC is “most urgent” because of the deadline for the filing of applications for the University of the Philippines College Admission Test.

This time around, the petitioners are worried Grade 10 students will miss the opportunity to take the admission tests of two other top universities in the Philippines – the Ateneo de Manila University (September 19) and the University of Santo Tomas (September 27).

With K to 12’s senior high school, current Grade 10 students will proceed to Grade 11 instead of graduating from high school and going to college.

“We are now arguing that the K to 12 law is violative of the constitutional right to substantive due process not only of the students of Manila Science but of all students, considering that there is no reasonable necessity of adding two years of high school to improve the quality of education,” Brillantes said.

In their latest motion, the petitioners also slammed the Office of the Solicitor General (OSG), which represents the government, because it asked for another extension of its deadline to file a consolidated comment on the petitions related to K to 12.

“The SC should now resolve our prayer for a TRO even without the OSG’s comment since there is no valid justification for the OSG’s repeated Motions for Extension of Time to File Comment and we were able to present convincing proof that the Constitution was indeed breached.”

To date, at least 5 petitions were filed before the SC asking for the suspension of K to 12. Critics cited labor issues, the inadequacy of a P29-billion transition fund for the program, and questions on the law’s constitutionality as basis for junking the program.

The High Court has since ordered the consolidation of all petitions challenging the controversial program. – Rappler.com