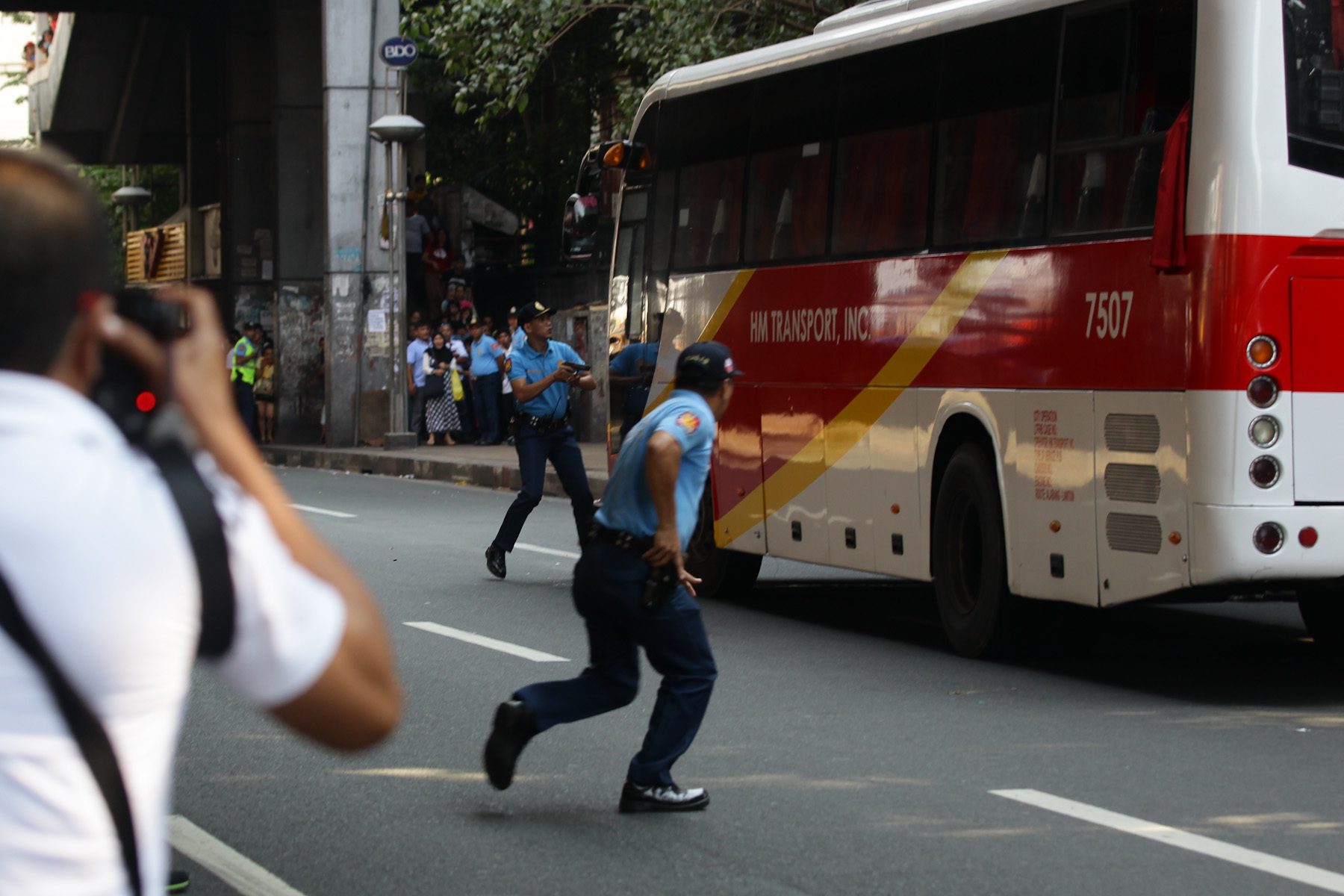 The suspect, a man reportedly armed with a knife who remains unidentified as of posting, boarded an HM Transport Bus at Luneta along Taft Avenue. He declared that he was holding the busload of passengers hostage as the vehicle approached Padre Faura, according to radio DZMM.

A passenger interviewed by the radio station said that the bus driver pulled over when the packed vehicle stopped at the corner of Pedro Gil, opened the door, and fled the bus, along with the bus conductor. The bus driver rushed to policemen on patrol and reported the incident.

Except for a female passenger that the suspect held hostage at the front row of the bus, all the rest of the passengers managed to escape through the window at the back of the bus.

Manila Vice Mayor Isko Moreno told the radio station in an interview after the incident that when policemen saw that the female student was being “poked” by the suspect, one of the policemen went to the driver’s side of the bus and shot at the suspect, giving the hostage a chance to escape.

The suspect was later pulled out of the bus and rushed to the nearby Philippine General Hospital where he was pronounced dead. The hostage is safe.

Chief Superintendent Rolando Nana, Manila Police District chief, said in an interview with Rappler that the hostage was taken to PGH but could not say for sure whether she was hurt. Nana said the incident stretched from 2:20 pm to 2:50 pm.

Manila Mayor Joseph Estrada congratulated Manila police for the “speedy response,” adding that the crime was “solved within 30 minutes.”

“The victim is safe and the hostage taker is dead. He was shot by one of our policemen. We congratulate our policemen for doing a good job,” Estrada said in an interview on DZMM.

When asked, Estrada said that there was “no negotiation” with the suspect. “When they (police) saw an opportunity, they shot him.”

On August 23, 2010, protracted government negotiations with hostage-taker Rolando Mendoza, who held hostage a tourist bus at the Quirino Grandstand, failed and led to the death of 8 Hong Kong tourists, as well as Mendoza.

The incident strained ties between the Philippines and Hong Kong for several years and was only resolved on April 23, 2014, when both parties finally agreed to resolve their differences over the incident.– with reports from Buena Bernal/Rappler.com