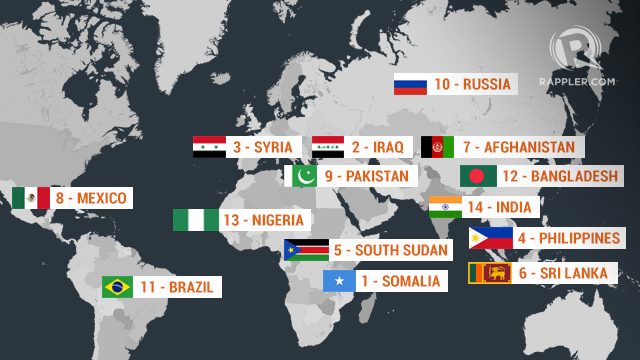 Facebook Twitter Copy URL
Copied
The Philippines has dropped to 4th from 3rd on the 2015 Global Impunity Index but 'remains the only country within the top 5 impunity offenders not engulfed by conflict and acute political instability,' says the Committee to Protect Journalists

MANILA, Philippines – Somalia has dislodged Iraq as the country with the worst impunity problem in the world, while the Philippines dropped to 4th place on the 2015 Global Impunity Index of New York-based watchdog Committee to Protect Journalists (CPJ).

In its report, “Getting Away with Murder,” released on Thursday, October 8, CPJ bared its 2015 Global Impunity Index which, it said, “spotlights countries where journalist are slain and the killers go free.”

“Despite calls by the United Nations for states to take greater steps to protect journalists in situations of armed conflict and to ensure accountability for crimes against the press, little progress has been made in combatting impunity worldwide,” said Elisabeth Witchel, author of the report and CPJ’s consultant on the Global Campaign Against Impunity.

“More than half of the countries on the index are democracies with functioning law enforcement and judicial institutions, but killers still go free. The international community must continue to put pressure on these governments to live up to their commitments,” Witchel added.

The report referred to democracies like the “Philippines, Russia, Brazil, Mexico, and India, which together have let the killers of at least 96 journalists go unpunished over the past decade.”

“The numbers show that the political will needed to prosecute those who silence journalists, many of whom investigate corruption or report critically on local leadership, is absent,” the report said.

“Though it has dropped to fourth from third on the Impunity Index, the Philippines remains the only country within the top  5 impunity offenders not engulfed by conflict and acute political instability,” the report said.

The CPJ noted that there had been 44 media killings since September 2005 “with complete impunity” – 7 under the Aquino administration.

“Justice for the 32 media victims and 26 others slaughtered in the 2009 massacre in Maguindanao appears more elusive than ever. No one has yet been convicted of the crime and, after 6 years of protracted legal proceedings, the suspected mastermind has now died of natural causes,” the report said. 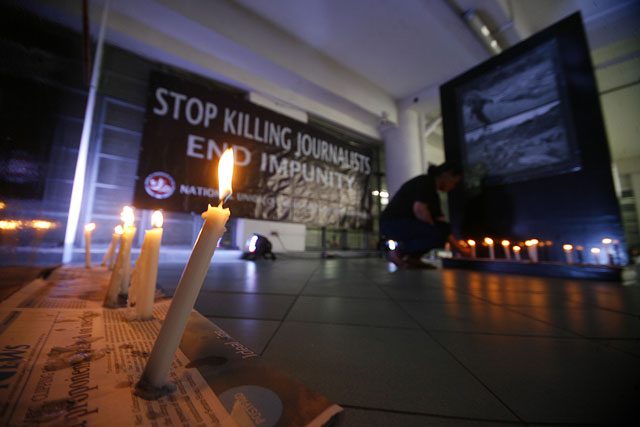 It added that while the 2013 conviction of the gunman in the murder of journalist Gerardo Ortega “was a welcome advance” the suspected masterminds behind his death – former Former Palawan Governor Joel Reyes and his brother, former Coron Mayor Mario Reyes – have yet to stand trial.

The two, who had been missing since 2012, were arrested in Thailand on September 20.  They are now jailed in Puerto Princesa, Palawan.

The report said that Somalia’s rise to the top of the index, claimed by Iraq since CPJ compiled it in 2008, “reflects a steady death toll…where one or more journalists have been murdered every year over the past decade, and the government has proved unable or unwilling to investigate the attacks.”

It noted that the authorities in Somalia (ranked 2nd in 2014), have blamed “political instability and shortage of resources inflicted by 20 years of civil war” but “journalists say authorities fail to conduct even minimal investigations when journalists are killed.”

“In April, unidentified armed men broke into the home of Daud Ali Omar at night and killed him and his wife while they were sleeping. Daud was a producer for a privately owned, pro-government radio station, and local journalists and police said they suspected Al-Shabaab was responsible,” the report said.

It said while Iraq has slipped to 2nd on the index, this is “based on a number of factors, few of them encouraging” as “only one conviction has been achieved” in that country.

“In Iraq…targeted killings have ebbed since the Iraq War. More recently, Islamic State has abducted and killed at least two journalists, but violence and fierce control of information have made it impossible for CPJ to accurately document additional cases,” CPJ said.

Syria: Most dangerous place for journalists

Syria moved to 3rd from 5th place in this year’s index due to the Islamic State’s attacks against journalists, the report said. It noted that since August 2014, “the militants beheaded 3 international correspondents, circulating videos of the executions on social media.” The report added that as in the case of Iraq, “the group is believed to be responsible for additional kidnappings and killings of journalists in Syria that CPJ has not been able to confirm.”

“Syria is the world’s most dangerous place for journalists, with record numbers of abductions and attacks committed not only by Islamic State but other militant factions as well as forces loyal to the Assad regime,” the report said.

The report also noted changes in this year’s index, including the entry of South Sudan (5th) and Bangladesh (12th) for the first time, owing to the ambush of a convoy with journalists in the former and the “hacking deaths” of bloggers in the latter.

“The addition of South Sudan, where 5 journalists traveling in a political convoy were ambushed and killed this year, is emblematic of the challenges to achieving justice in areas wracked by war or where potent illegal armed groups actively menace journalists, like Pakistan, 9th on the index, and Nigeria, 13th,” the report said.

Colombia, ranked 8th last year, has exited the list – the only one to do so this year – after it “has shown enough convictions in journalist murders and decrease in violence to exit the list since 2014,” the report said.

“Convictions in two journalist murders have taken place there since 2009; both notably brought full justice with the sentencing of the masterminds. But Colombia’s improvement is also largely attributed to a decrease nationwide in political violence and to a government protection program for journalists,” CPJ said.

There are still cases, however, of numerous threats made against journalists in that country.

The CPJ report also noted convictions in 3 countries on the index – Russia (10th) Iraq, and Brazil (11th) – but only the suspect in the 2009 homicide of Russian reporter Anastasiya Baburova went to jail.

“In the past decade, 270 journalists have been murdered, CPJ research shows. Of those, 96% are local reporters. In only 2% of cases are the masterminds ever prosecuted,” the report said.

It also said that 14 countries on the index account for a combined “83% of the unsolved murders that took place worldwide during the 10-year period ending August 31, 2015.”

For the 2015 index, CPJ said it examined unsolved journalist murders between September 1, 2005, and August 31, 2015. Only nations with at least 5 unsolved cases were included. – Rappler.com