‘Balance of power,’ Aquino says of US ship in West PH Sea

Oct 27, 2015 1:25 PM PHT
Facebook Twitter Copy URL
Copied
'I see no issue as to this US Navy ship traversing under international law in waters that should be free to be traveled upon by any country,' the Philippine leader says in welcoming the move 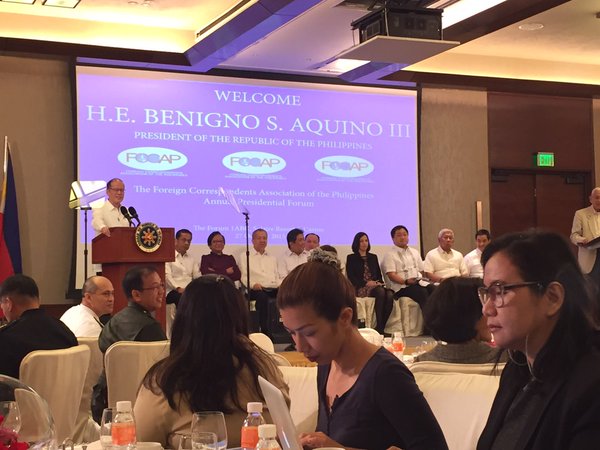 MANILA, Philippines – President Benigno Aquino III on Tuesday, October 27,  welcomed the sailing of a US warship near islands claimed by China in the disputed West Philippine Sea (South China Sea), calling it a “balance of power.”

Responding to questions at the annual Foreign Correspondents Association of the Philippines’ (FOCAP) presidential forum, Aquino said any country has the right to traverse the region based on international norms.  (READ: US warship sails near islands claimed by China)

“I see no issue as to this US Navy ship traversing under international law in waters that should be free to be traveled upon by any country,” Aquino said, when asked about the USS Lassen‘s operation on Tuesday morning.

He added: “So long as everybody conforms to established international rules and laws, then I don’t think the Philippines should have any negative apprehensions about these acts. And if we say we are in support of freedom of navigation for everybody, then we seek to hamper anybody’s travel, that, I think, seems to be inconsistent.”

Asked how he views the US presence in the disputed waters, Aquino said he expects the move to be welcomed not only by the Philippines but other stakeholders as well.

“I think everybody would welcome a balance of power anywhere in the world,” he said.

When asked to explain further, Aquino cited the US position that if the public pronouncements of “one regional supowerpower” are left unchallenged “then this is accepted, and if it is accepted, it becomes de facto the reality on the ground.”
“The American passages through these contentious waters is meant precisely to say that there are norms as to what freedom of navigation entails and they intend to exercise, so that there is no de facto changing of the reality on the ground,” Aquino said.

The Philippine leader also referred to China’s declaration of an Air Defense Identification Zone extending over an area where “there are so many agreements that have been entered into that all countries have been bound to for the longest time.”

“When you change something there is general agreement among all parties that are affected, as to what changes would bring about a better regime in terms of travel, it cannot be determined by one entity,” Aquino said.

He added: “So the balance of power says that there is not just a single voice that must be adhered to. There has to be a plurality of voices when all parties are affected by changes of the realities on the ground.”

‘No effect on case vs China’

The US Navy Destroyer navigated within 12 nautical miles of artificial islands being built by China in the disputed waters on Tuesday, which the latter deemed as a violation of their laws.

Aquino shrugged off questions on how the Philippines’ support for the presence of the US warship in the disputed waters would affect its arbitration case pending before the international arbitral tribunal in The Hague.

“I think expressing support for established norms of international behavior should not be a negative for country. Let me put in…the reverse: Somebody suddenly changes the rules and are we – how should I put it – we just accept the changing of the rules without any consultations, without any negotiations, without even an agreement is I think the wrong behavior to undertake,” Aquino said.

The latest development in the West Philippine Sea has renewed interest in the Philippine-US Enhanced Defense Cooperation Agreement (EDCA), a military-to-military treaty signed shortly before the visit of US President Barack Obama to the Philippines in 2014.

Aquino, in defense of the controversial agreement, said the Philippines “definitely” needs EDCA, as the country is still in the “period of modernizing the Armed Forces.”

The President said EDCA allows the country to “test equipment” before buying them.

“Akin to test-driving a car as opposed to buying a system trying it out and finding out it is not working. By the time we purchase them, we are more than ready to utilize them,” Aquino said.

Citing the treaty, Aquino said the Philippines would aid the US in case they need logistical support in their operations in the contested waters.

“If you have an ally from the opposite site of the world and we will not support it logistically, how would it make sense?” Aquino said. – Rappler.com