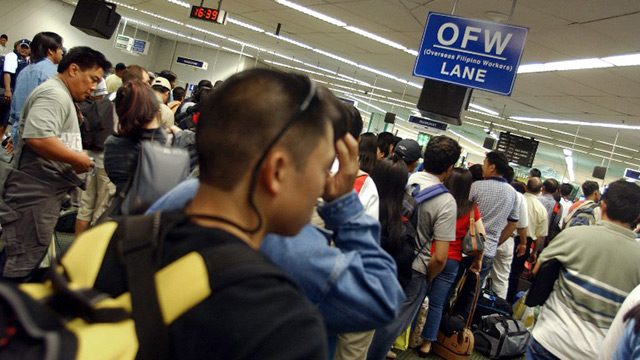 MANILA, Philippines (UPDATED) – Senatorial aspirant and longtime overseas Filipino workers (OFW) advocate Susan Ople called for the release of a Filipina migrant worker who claimed to be a victim of the alleged “bullet planting” scam at the Ninoy Aquino International Airport (NAIA).

Gloria Ortinez was arrested on October 25 and prevented from leaving the country for Hong Kong after authorities claimed to have found a bullet wrapped in red cloth inside her bag at NAIA 2. According to media reports, she was released on October 27.

The 56-year-old migrant worker has denied that the bullet was hers. Ortinez also said that she would never bring the bullet with her as she was well aware of Hong Kong’s strict security laws.

In a statement on Tuesday, October 27, Ople said it was clear that the longtime OFW was innocent, and that she should not face charges of illegal possession of ammunition.

(Why would she risk the job waiting for her in Hong Kong for one bullet? As a longtime OFW, she is quite aware that carrying ammunition is prohibited under Philippine and Hong Kong laws.)

The former labor undersecretary also called on President Benigno Aquino III to personally look into the incident and other similar complaints lodged by OFWs and passengers against airport authorities.

Ople said the series of alleged extortions and scams at NAIA is creating a “climate of fear” among returning migrant workers. (READ: How to curb ‘laglag-bala’ modus and airport extortion)

Last month, at least two passengers complained about the modus operandi at NAIA, where airport personnel allegedly planted bullets in passengers’ luggage to extort money from them.

Meanwhile, Senator Cynthia Villar has filed her proposed Senate Resolution No. 1610, calling for an inquiry on complants against personnel of the Office for Transport Security.

Citing the number of complaints, Villar stressed the need to examine the protocol practiced by the OTS “with the end in view of ensuring that our OFWs and other flight passengers will not be subjected to exploitation” and to uphold the integrity of airport personnel.

Villar joined other senators, such as Senate President Pro Tempore Ralph Recto, in calling for a probe into the alleged scams. – Rappler.com