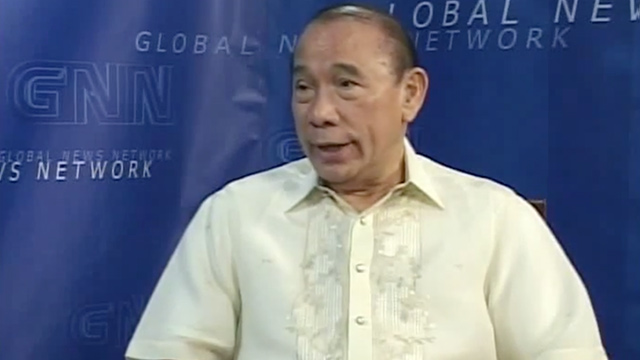 Herrera died past 2 pm of Thursday, October 29, at the Manila Doctors Hospital, said Tita Misolas, his secretary for almost 30 years.

Misolas told Rappler that the wake will be held at the Heritage Memorial Park in Taguig.

Senate President Franklin Drilon and his colleagues paid tribute to the ex-lawmaker.

“I have known Boy for decades and I witnessed how committed he was in fighting for the cause, rights and welfare of millions of our workers. He was a giant of Philippine labor. Our country’s workers have lost a champion,” said Drilon, a former labor secretary.

The flag at the Philippine Senate is at half-mast to honor Herrera, and necrological services are tentatively scheduled on Wednesday, November 4.

Herrera was a two-term senator who won in the 1987 and 1992 elections. He was also a representative of Bohol. As a lawmaker, he championed labor, employment, fiscal, education, and anti-drugs, and law and order policies.

A multi-awarded policymaker and advocate, he led the Trade Union Congress of the Philippines (TUCP) as general secretary and president. Even after leaving government, he was deeply involved in the labor movement, and often spoke up on issues affecting workers.

As senator, Herrera pushed for landmark reforms in vocational education and training that resulted in the establishment of the Technical Education and Skills Development Authority (TESDA), according to his profile on the Senate website.

His death came weeks after the passing of another veteran senator, Joker Arroyo.

“A titan of the labor movement passed away today,” Ople told Rappler. “In the Senate, he was Robin to my dad’s Batman, holding weekly press conferences as labor’s voice and conscience.”

Ople said the regional wage board was Herrera’s brainchild. The former senator was not just an advocate of local laborers, but also of OFWs.

“OFWs need to know and remember that the principal author of the Migrant Workers Act of 1995 was Senator Boy Herrera. As labor leader, senator and congressman, he has made his mark in history,” Ople said.

She added: “Courage was his middle name. He was the first to expose the drug menace when people didn’t even know what a gram of shabu looks like. He stood up on the Senate floor and exposed the shabu factories hidden in the metropolis. He was very passionate about serving the labor movement.”

“The name of Boy has been synonymous with his staunch advocacies relating to trade unions in the country and has been General Secretary of the Trade Union Congress since 1983. He was a consultant for the International Labor Organization (ILO).”

“We thank Boy Herrera for his valuable service to our nation and its people as we pray for his eternal rest,” said the Speaker.

Born in Samboan, Cebu, Herrera became known as a member of the Agrava Fact-Finding Board that investigated the 1983 assassination of former Senator Benigno “Ninoy” Aquino Jr.

He earned a bachelor’s degree in law from the University of Visayas in 1966, and a master’s degree in public administration, major in public finance, from the Lyceum of the Philippines in 1995.

In the Philippines, Herrera was the workers’ representative in the National Wages Council, the Social Security Commission and the National Manpower and Youth Council.

He was also chairman of Crimewatch and the founding chairman of the Citizens’ Drug Watch Foundation, and president of the Carlos P. Garcia Foundation.

Former Sen. Boy Herrera, a staunch advocate of the rights of workers, just passed away. My condolences to his family.

Former Senator Rene Saguisag, another Herrera contemporary in the post-EDSA Senate, called him a “long-time and valued friend.” The prominent human rights lawyer during martial law remembered Herrera “with respect and admiration.”

“I first heard of Boy as a courageous member of the Agrava Board. He voted to indict the powerful, to the irritation of Marcos. He was a prominent labor leader. He was the prime proponent of the return of the death penalty. I was against and in effect filibustered in the Senate, to his displeasure,” Saguisag said in an e-mail to Rappler.

Despite their differences, Saguisag said Herrera remained a good friend.

“He was, as always, full of cheer and optimism when last we met. I’ll remember him that way.” – Rappler.com