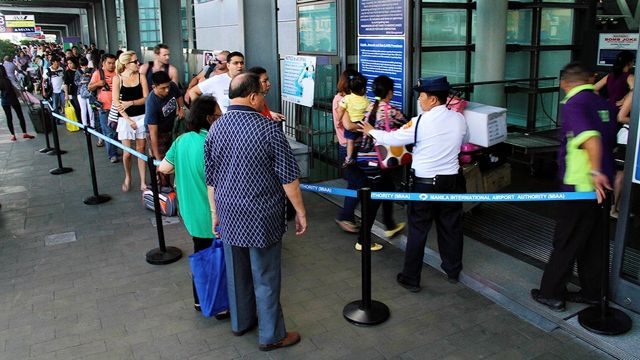 Facebook Twitter Copy URL
Copied
Malacañang says of the 'bullet scam' that has alarmed OFWs and travelers: 'There are already officials deployed in airports. We have public assistance desks.'

MANILA, Philippines – As the so-called bullet scam in the Philippines’ main airport hit international headlines, Malacañang said there are enough officials and help desks in airports nationwide to respond to the problem.

Palace Communications Secretary Herminio Coloma Jr responded to the call of Senator Ralph Recto to put a presidential action desk at the Manila airport terminals to address the scam.

Locally known as the “laglag-bala (dropping bullets)” scam, the alleged extortion scheme involves planting bullets in passengers’ luggage, and asking them for money under threat of lawsuits. Airport personnel are allegedly behind the scam. (READ: How to curb ‘laglag-bala’ modus and airport extortion)

“There are already officials deployed in airports in charge of helping those using our facilities. We have public assistance desks. The whole vision, mindset, of all government employees is to help those using our airports,” Coloma said on Friday, October 30.

Recto urged the Office of the President to tap its Presidential Action Center to receive complaints of scams, and to handle the concerns of passengers, especially overseas Filipino workers (OFWs).

The senator said the presidential action desks can serve as a “one-stop, on-the-spot troubleshooting center” for OFWs and travelers. He also called for a Senate inquiry into the issue.

The scam alarmed lawmakers, labor advocates, and netizens after OFWs and tourists reported the alleged extortion. Gloria Ortinez, a Filipino worker in Hong Kong, and Japanese tourist Kazunobu Sakamoto, were arrested on October 25 for illegal possession of ammunition but denied that the bullets were theirs. (READ: Isang bala ka lang: Netizens decry ‘laglag-bala’ incident)

Look, how paranoid travellers are in the world’s worst airport.

The BBC and TIME reported about the racket, quoting Filipino legislators as saying that it has become an international embarrassment.

The TIME article said: “The job of airport security is to confiscate dangerous items from suitcases, but travelers have recently found the opposite is true in the Philippines’ Manila Airport, where staff have allegedly been dropping bullets into the bags of unsuspecting passengers.”

Still, Coloma said the issue must be put “in the right context.”

“There are thousands who use the airport, but only a few have been found with bullets, and all these incidents are under investigation in accordance with the law. We recognize the human and legal rights of each individual involved.”

The Palace official added that the government was only after the safety and security of passengers by using electronic equipment to inspect luggage.

The Philippines has a huge diaspora, with 2.3 million of the 100 million population working overseas. Many of them are expected to head home in December for the Christmas holidays.

The Ninoy Aquino International Airport in Manila often ranks among the world’s worst airports but has seen some physical improvements over the past months.

More lawmakers added their voice to calls to investigate the scam, and to install measures to prevent similar rackets.

Senators Miriam Defensor Santiago and Alan Peter Cayetano announced Friday that they also filed resolutions calling for a congressional probe into the issue. Santiago is a presidential candidate in the May 2016 polls while Cayetano is a vice presidential bet.

Santiago’s resolution was in response to a Change.org petition asking her and Senator Grace Poe to investigate the scam. Over 13,000 netizens signed the petition as of posting time.

Santiago and Cayetano joined colleagues Recto, and Senators Cynthia Villar and Nancy Binay in pushing for an inquiry.

The following are the proposals of Santiago and Cayetano:

“The reports highlight how corruption defeats the purpose of law enforcement. Second, they raise a legitimate question on the implementation of the law on the illegal possession of ammunition. Finally, they underline inaction on the part of government,” said Santiago, a legal expert.

Cayetano said the scheme is an added burden on OFWs, who recently protested the government’s initial plan to strictly inspect and impose taxes on balikbayan boxes.

A symbol of OFW life, the balikbayan boxes are used to send items to families back home. Under fire over the new regulations, customs officials caved in to pressure and relaxed the rules in August.

“Authorities should exercise zero tolerance over these harassment cases. It’s bad enough that our OFWs had to put up with unwarranted policies like the random inspection of their balikbayan boxes,” Cayetano said. – Rappler.com