Jueteng back after Robredo’s death? 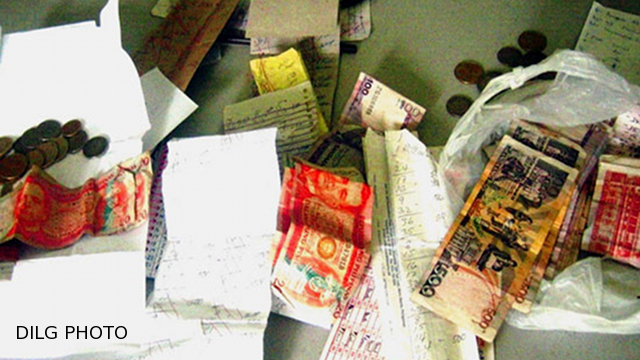 The meeting, according to reports, was held on Tuesday, August 21, the day divers retrieved the body of Interior and Local Government Secretary Jesse Robredo off Masbate. Robredo was a staunch opponent of jueteng.

Ranara confirmed to Rappler in a phone interview that they received information over a text message that jueteng collections have started in Libmanan and some other towns. On checking with local police chiefs and intelligence operatives, however, he said the report “turned out to be negative.”

“The Libmanan chief of police submitted a report denying jueteng collection in his area.”

Ranara said that he also met with police intelligence operatives to check on reports of alleged resumption of jueteng collections in the province. The operatives also confirmed that no meeting of jueteng collectors took place in Libmanan town, contrary to news reports, according to Ranara.

Quoting an unnamed informant, Bicol Mail, a local regional daily, reported that jueteng correadors (bet collectors) in neighboring towns were told to get ready to resume operations during the August 21 meeting.

The capitalist behind the operation, according to the Bicol Mail report, is from Batangas while an individual whose is known as “Kambal” (twin) will be running the operation of the illegal numbers game.

“This is very sad because Robredo managed to stop it,” Gabby Bordado, vice-mayor of Naga City and long time ally of Robredo told Rappler. “We have not even buried Jesse.”

During his stint at the DILG, Robredo pushed the Philippine National Police (PNP) to go tough against the illegal numbers game, adopting a “one-strike policy” against chiefs of police who were found to have failed to stop jueteng in their areas of jurisdiction.

Prior to that Robredo also worked to stamp out jueteng operations in Naga while he was city mayor.

While Robredo was at the DILG a task force was formed consisting of DILG and PNP operatives going against syndicates behind jueteng who were using the small town lottery operations as front for operating the illegal numbers game. A number of jueteng correadors (bet collectors) were caught in the process and cases were filed against them.

A number of police officials have been sacked for failing to stamp out jueteng in their jurisdictions. Among those who were relieved were Senior Insp.Timothy Arciso Jr. of Sta. Elena, Camarines Norte; Supt. Allan Ramos of Daet City; Sr. Insp. Dominick Poblete of Mapandan, Pangasinan; and Chief Insp. Erwin Doma of Castilla town and Senior Insp. Joselito Gapan, of Juban town, both in Sorsogon.

Three chiefs of police in CamSur were also sanctioned under the one strike policy and have been removed from office as a result, according to the Bicol Mail. They are Sr. Inspector Victor Azuela of the Baao town PNP,  Chief Inspector Ely Compuesto of Pili PNP and Chief Inspector Espana of the Calabanga PNP.

Bicol Mail reported that it was unable to interview Chief of Police Supt. Edgardo Datoon of the Libmanan PNP because he was in Tigaon, Camarines Sur at the time. Rappler also tried to contact Datoon but was unable to reach him via his mobile phone.

Ranala told Rappler he has issued a memorandum to all local police chiefs to be vigilant in preventing the resurrection of jueteng in the province.

Bordado for his part appealed to the media for help so that the reforms that Robredo worked hard to institute “will not go down the drain.” – Rappler.com