Nov 2, 2015 10:48 PM PHT
Editha Caduaya
Facebook Twitter Copy URL
Copied
The Davao City mayor also appeals to the President, from whom he has never asked a favor, 'Please Mr President, do something about the laglag-bala problem' 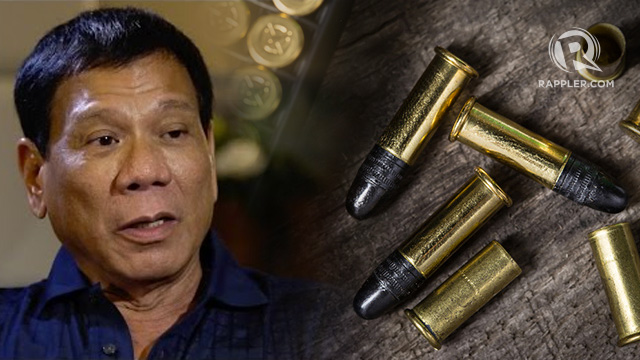 Espinosa, afraid that he could be the next target of extortionists from possibly airport police and security personnel, asked the mayor for help. (READ: Bullets in luggage again – this time at Davao airport)

Espinosa, also president of “OFW Worldwide”, said he was “surprised” and “so happy” by what Duterte told him.

Based in the Netherlands, Espinosa called on Duterte for help, following numerous cases involving the “laglag-bala” or bullet-planting scam.

Thus far, authorities have apprehended at least 5 people for allegedly carrying bullets in their luggages. These are believed to be largely planted to frame passengers and extort money from them. The Aviation Security Group, however, says 30 cases have already been recorded from January to early November this year.

Favor asked of the President

Duterte also told Espinosa he is asking President Benigno Aquino III a favor: “Please Mr President, do something about the laglag-bala problem.”

“I never asked any favor from him in the past, but now I am asking him do something,” Duterte told Rappler.

Espinosa said OFWs going home for Christmas are worried they might be victimized by perpetrators of the laglag-bala scam.

Returning OFWs have designed a label for their luggage. It says:

This is to certify that this travel bag was personally packed by the owner and does not contain any bullet or anything illegal. The owner is not a dumb Filipino to put jeopardy his/her travel funded by hard-earned money. The owner likewise disavows responsibility or liability on anything that Philippine airport authorities will claim to the contrary. In case of emergency please contact my lawyer.

“I am a law abiding citizen” 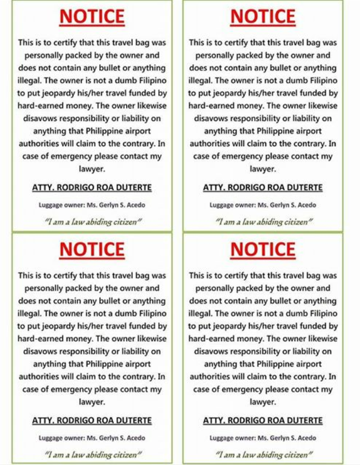