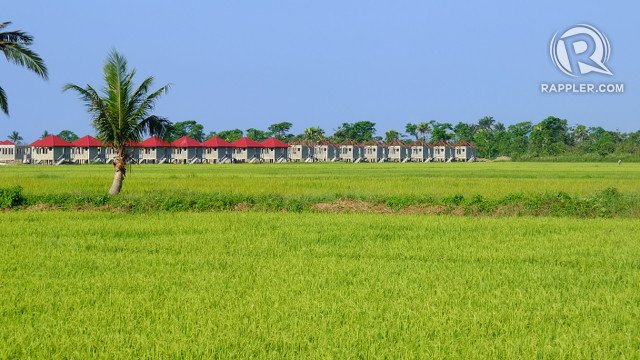 MANILA, Philippines (UPDATED) – The government seeks to put a stop to a housing project in typhoon-struck Casiguran, Aurora, initiated by the Aurora Pacific Economic Zone (APECO).

In a letter dated October 30, the Department of Agrarian Reform (DAR) reminded APECO management of a Cease and Desist Order (CDO) that prevents it from continuing its Nayon Kalikasan housing project.

The CDO directs APECO to stop “performing further acts that would alter or change the use of a parcel of land within the APECO area without the DAR conversion clearance and forewith directs the APECO to respect and abide the said order.”

The letter also informed APECO management that two DAR personnel will be conducting “frequent” visits to the housing project in order to implement the CDO and monitor the area.

The housing project sits on 2.5 hectares of land that had once been irrigated, agricultural land in Barangay Esteves, Casiguran.

A farmer previously interviewed by Rappler said his rice crops had been among the those buried under sand and stone for the construction of the housing project. (READ: A ‘small-time’ Angara faces the skeletons of APECO)

The CDO, issued on September 8 but received by APECO only on October 27, comes two years after a May 2013 inspection of the site by DAR regional personnel.

APECO president Gerardo Erquiza told Rappler that the CDO is “misplaced” because the issue on whether or not APECO land is subject to agrarian reform is still pending with the Supreme Court.

He emphasized that under the APECO law, only APECO “has the sole authority to determine the use of the land within its jurisdiction.”

He further stated that the housing project is for the benefit of Casiguran residents and that the 13 hectares it will eventually take up is “tiny” compared to the 1,200 hectares of agricultural land in the town.

The CDO, said Erquiza, is part of the “journey” of APECO. He said the management will “study our options and remedies.”

On the other hand, Casiguran resident Elmer Gonzales welcomed the CDO saying, “If DAR is able to implement this order, then we will be able to recover more quickly from Typhoon Lando because our farms will no longer be threatened by APECO’s illegal activities.”

“I wish the CDO had even been issued earlier because overwhelming evidence shows that never was there any basis to convert, that procedures were never followed to try to even give some semblance of legitimacy to the conversion,” said volunteer lawyer Eirene Aguila.

The group continues to call for the repeal of Republic Act No 10083, the law that created APECO and allocates a budget for it.

Aside from the CDO, Aguila said the farmers whose land was affected by the housing project should receive compensation.

TFAA spokesperson Xavier Alpasa said taxpayers’ money going to APECO should instead be devoted to “helping Casiguran residents recover from Typhoon Lando and livelihood projects that actually benefit the community.”

Casiguran was among the worst hit by Typhoon Lando, which made landfall in the town on October 18.

Structures built within the APECO compound were among those badly damaged by the storm. This prompted APECO critics to again question the wisdom of putting up an economic zone in such a typhoon-prone area.

Prior to Lando, APECO structures had been damaged by Typhoon Labuyo in 2013.

But Erquiza pointed out that the roads and airstrip built for APECO functioned as a “lifeline” after Lando’s onslaught. The airstrip allowed President Benigno Aquino III and relief goods to land safely aboard C-132 planes.

The 12,923-hectare APECO is a multi-million-peso government project envisioned to bring economic prosperity to the remote Aurora town.

But so far, the project has attracted only a few investors and is constantly given a “caretaker” budget by Congress for failing to deliver on its promises.

APECO is the brainchild of former senator Edgardo Angara, head of a powerful political clan in Aurora. – Rappler.com