Facebook Twitter Copy URL
Copied
The captors, who identify themselves as members of the Abu Sayyaf, are demanding P1 billion ($21 million) in ransom for each of the 3 foreign hostages

MANILA, Philippines – The Abu Sayyaf Group is demanding P1 billion ($21 million) each for the release of the hostages abducted in a resort on Samal Island, Davao del Norte last September 21.

The video, posted by the United States-based jihadist monitor SITE Intelligence Group, showed the hostages in a jungle setting. According to intelligence officials, the hostages are currently being held in Sulu, stronghold of the US-listed terrorist group.

In the video, one unmasked militant is seen holding up a knife to the three foreigners, who took turns appealing for help and asking that the ransom be paid.

John Ridsdel: My name is John Ridsdel, I’m also being held hostage by the Abu Sayyaf group. We’re being ransomed for each for one billion pesos. I appeal to the Canadian Prime Minister, and the people of Canada, please pay this ransom as soon as possible, or our lives are in great danger.

Robert Hall: My name is Robert Hall, I’m a Canadian citizen. I’m being held hostage by Abu Sayyaf for 1 billion pesos. These people are serious and very treacherous. Take them seriously. Help us, get us out of here.

Flor, Hall’s girlfriend, did not speak.

The video ended with an Abu Sayyaf member threatening that the hostages will be killed if their demands are not met. 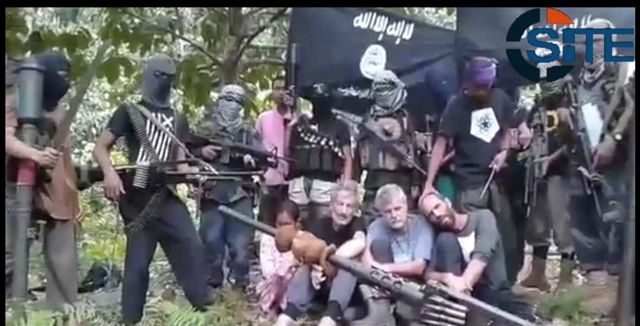 In September, Philippine National Police Region 11 authorities said the victims were seized at gunpoint by at least 20 heavily armed men at the Holiday Oceanview Resort.

Investigators said the perpetrators attempted to kidnap a Japanese couple but failed after spouses Steven and Kazuka Tripp fought back.

Founded in the early 1990s with seed money from Al-Qaeda chief Osama bin Laden, the Abu Sayyaf gained international notoriety for kidnapping dozens of foreign tourists for ransom in the early 2000s.

The group has also been blamed for the country’s worst terrorist attacks, including the bombing of a ferry off Manila Bay in 2004 that killed more than 100 people.

It is believed to have just a few hundred gunmen, but thrives in lawless sections of the southern Philippines where Muslim rebels have for decades fought for independence or autonomy.

The Abu Sayyaf is known to be holding 3 other foreigners – two Malaysians and a Dutch man, according to the military.

An Italian ex-priest, Rolando del Torchio, was also abducted from his pizza restaurant in the southern port city of Dipolog in October.

The Abu Sayyaf is widely believed to be holding him, but authorities have not confirmed this.

And a 74-year-old South Korean kidnapped in January was found dead on Jolo during the weekend. The military said the Abu Sayyaf abandoned the hostage after he died from a “severe illness.”

The Philippine government has repeatedly said it has a “no-ransom policy,” but parties linked to captives frequently pay.

In October 2014, the Abu Sayyaf claimed it received P250 million ($5.3 million) in exchange for two German hostages they held captive for 6 months. Security analysts said a large ransom was paid. – with reports from Agence France-Presse/Rappler.com