MANILA, Philippines – Several roads in Manila will be closed to motorists from November 16 to 20, as the Philippines hosts the Asia-Pacific Economic Cooperation (APEC) summit this month.

About 21 heads of state and their security detail are expected to attend the leaders’ summit from November 18 to 19.

Malacañang earlier declared November 18 and 19 as special non-working holidays. Classes have also been suspended in Metro Manila schools from November 17 to 20.

The government has released road advisories in preparation for the event. The two innermost lanes of both the northbound and southbound sides of EDSA, from Shaw Boulevard in Mandaluyong City to Mall of Asia in Pasay City, will be reserved for the exclusive use of APEC delegates from November 16 to 20.

The remaining lanes will be open for non-APEC vehicles.

In Manila, the following roads will be closed: From November 16 to 20, Roxas Boulevard will be fully closed on both the northbound and southbound directions. 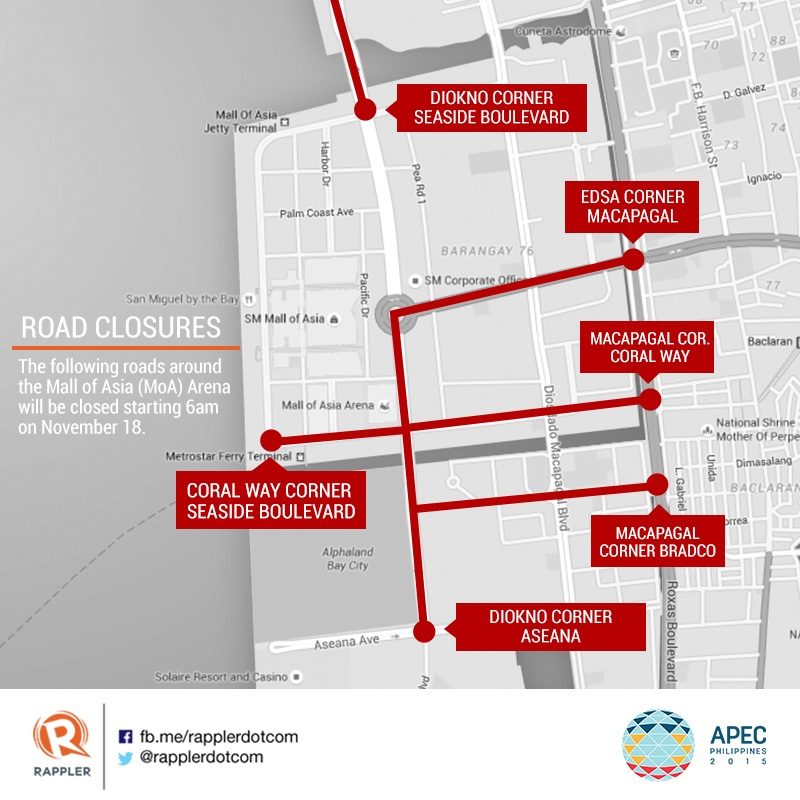 From November 15 to 20, a stop-and-go scheme will be implemented along the Magallanes and Skyway/South Luzon Expressway interchanges, parts of Makati, EDSA, and roads around the Ninoy Aquino International Airport.

Traffic will be stopped to let APEC leaders pass through, and will be allowed to flow after.

Starting 6 pm on November 18, an alternative traffic plan will be implemented in the MOA area. Instead of using Roxas Boulevard, motorists may take the following alternate routes: From November 16 to 20, trucks will not be allowed to traverse metro roads along the south route from 6 am to 10 pm.

Roxas Boulevard will remain under a 24-hour truck ban on the 4 days of the summit.

The number coding scheme will remain in effect in Metro Manila. – Rappler.com

Graphics by Mara Mercado, based on apec2015.ph road advisories