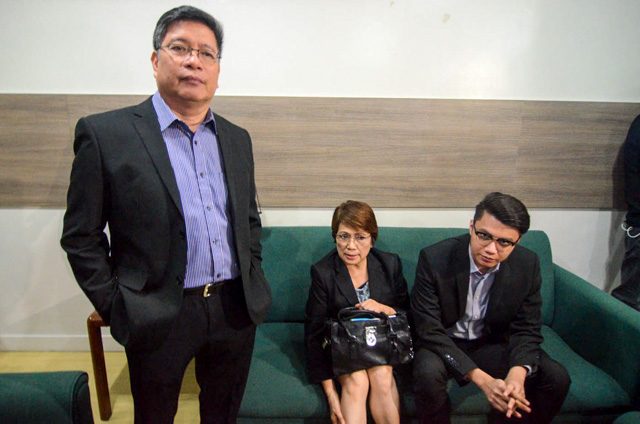 Facebook Twitter Copy URL
Copied
'They (INC officials) are waiting for the right time and the right forum, venue to answer all the legal questions. I think the time has come,' says expelled INC minister Isaias Samson Jr

MANILA, Philippines – Top officials of the powerful Iglesia ni Cristo (INC) were no-shows at the Department of Justice (DOJ) on Friday, November 6, for the preliminary hearing on the illegal detention complaint filed by expelled minister Isaias Samson Jr.

In an interview before the start of the proceedings, Samson said he was happy that the case was finally moving.

“They (INC officials) are waiting for the right time and the right forum, venue to answer all the legal questions. I think the time has come,” he said.

(We are happy because everyone, especially our brethren in the Iglesia, need to know what’s really happening and what led to these cases.)

But the INC respondents did not appear before Assistant State Prosecutors Olivia Torrevillas and Mark Roland Estepa to file their response to Samson’s complaint.

At 3 pm, Estepa deemed the case submitted for resolution.

Asked to comment on the respondents’ absence at the hearing, Samson’s lawyer, Trixie Cruz-Angeles, said the church officials might have been advised by their counsel not to appear.

But Angeles added that the INC camp still has legal remedies available to them. Estepa said they may file a motion to reopen the case, which the panel of prosecutors may opt to consider.

“They still have legal remedies, which is why we’re not going to relax yet and understand this to mean that it’s going to be filed,” Angeles said.

Samson, who was expelled from the INC for “disobedience and refusal to submit,” accused top church officials of putting him and his family under house arrest on suspicion that he was behind a blog critical of the powerful church.

The former minister said he and his family were barred from leaving their Quezon City townhouse from July 16 until their escape on July 23.

In August, just two days after Samson filed his complaint, the powerful church mobilized its flock, with thousands of the Iglesia faithful staging a vigil outside the DOJ to protest what they considered the state’s interference in church matters.

Crying religious persecution and slamming the DOJ’s alleged special attention to Samson’s case, then DOJ Secretary Leila de Lima became the target of the protesters’ anger. But at the time of the rallies, however, the case has not even been assigned a prosecutor.

The INC ended its 5-day protest on August 31, after a meeting with government officials.

The 101-year-old church, known for being politically influential, is facing its worst crisis in years. Leadership controversies and corruption allegations are hounding the religious group. – Rappler.com