Facebook Twitter Copy URL
Copied
Various locations around the Philippines were chosen to host high-level meetings in the past few months, showcasing the 'dynamism and rich culture of the Philippines'

MANILA, Philippines – World leaders are set to converge in Manila next week for the concluding event of the 2015 Asia Pacific Economic Cooperation (APEC) summit.

Heads of state across the region are expected to attend the APEC Economic Leaders’ Meeting (AELM) in Manila on November 18 to 19 – the last of annual meetings hosted by the Philippines on its second chairmanship of the high-level talks.

The Philippines first hosted the meetings in 1996 in Subic, Zambales. Back then, the country was dubbed as “Asia’s next economic tiger.”

This time around, the Philippines as host country wanted to stand out for its hospitality, and aimed to showcase its commitment to promote inclusive growth.

This involved bringing the delegates to different locations in the country – places that, according to President Benigno Aquino III, have largely contributed “to the dynamism and the rich culture of the Philippines.”

The Philippines kicked off its chairmanship of the 2015 APEC in December 2014, with its hosting of the Informal Senior Officials’ Meeting at the Makati Shangri-La Hotel.

In the lead-up to the AELM this November, Rappler gives an overview of different places in the Philippines where delegates from member-economies of APEC have met over the last few months. 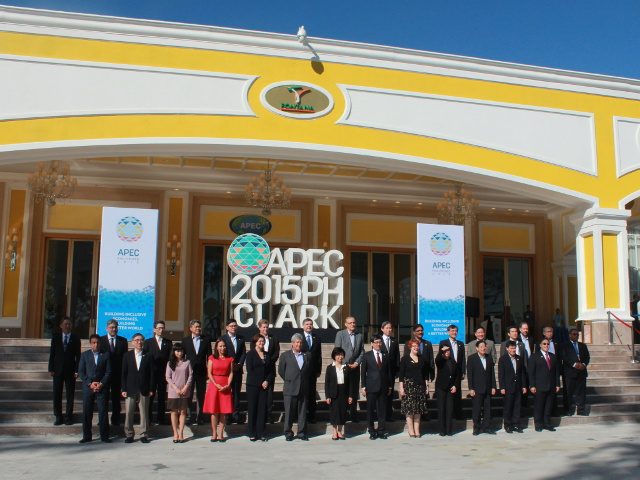 The first meeting of senior officials of the APEC’s 21 member-countries kicked off in February at the Clark freeport zone in Pampanga.

The two-day meeting at the Fontana International Convention Center aimed to “lay down the groundwork” for the policy direction of this year’s summit.

Clark Freeport, a former US military base turned industry hub, was also cited by Foreign Affairs Secretary Albert del Rosario as a “model of investment and business resilience.”

Related meetings by the emergency preparedness working group and senior disaster management officials were also held in the Subic Bay freeport, the site of the APEC summit in 1996 – the first time the Philippines hosted the gathering under the presidency of Fidel Ramos. In March, deputies of finance ministries and central banks gathered in Tagaytay City in Southern Tagalog for a series of meetings to tackle issues on achieving financial resiliency and recognizing risks on the growth prospects of the Asia-Pacific region.

The meetings, held at the historic Taal Vista Hotel, aimed to create the Cebu Action Plan, a roadmap proposed by the Philippines for Asia-Pacific economies.

A two-day conference on disaster risk finance was held from April 29 to 30 at the SMX Convention Center, the first such convention center opened by the SM Group in the Visayas.

With global damage due to calamities already hitting $300 billion, delegates discussed disaster risk management initiatives, such as encouraging microinsurance to help mitigate the impact of disasters especially among poor communities. Popular beach destination Boracay in Western Visayas played APEC host earlier this year, with around 1,500 delegates, including trade ministers and tourism officials, gathering at the island in May.

Trade ministers discussed strategies to expand trade, create jobs, and encourage cross-border business opportunities for small firms in the two-day meeting held from May 23 to 24. In June, historic Bataan also hosted a couple of meetings: the APEC Workshop on Fiscal Management Through Transparency and Reforms, and the APEC Senior Finance Officials’ Meeting.

Both events were held at Las Casas Filipinas de Acuzar in Bagac, Bataan. According to Finance Secretary Cesar Purisima, the heritage resort was chosen so that delegates can get a “unique experience…as they bask in the past while charting the region’s future.”

The workshop tackled trends in expanding fiscal space to accommodate inclusive forms of government investment, while the meeting revolved around fiscal policies for inclusive growth and addressing inequalities. The island province of Cebu was host to around 60 meetings, including the Third Senior Officials’ Meeting last August and September – the prelude to the AELM in Manila.

During the Third Senior Officials’ Meeting, delegates tackled pressing issues in the Asia-Pacific, including health, water pollution and shortage, urbanization, and connectivity (physical, institutional, and people-to-people).

Finance ministers also met in the province on September 10 to 11, where they identified disruptions in the financial markets and raising long-term potential growth as key challenges of the region.

A month later, in October, the province saw gatherings of ministers from the energy and transportation sectors. There, the ministers acknowledged the importance of resiliency in both sectors during times of disasters. A two-day forum on disaster management was held from September 22 to 23 at the Iloilo Convention Center (ICC), where disaster officials from APEC member-countries came up with a basic framework to encourage cooperation among countries and make their economies resistant to calamities.

The venue of the meetings – the P679.8-million ICC – was the subject of controversy late last year, after claims of corruption against Senate President Franklin Drilon, the primary sponsor of the allegedly overpriced infrastructure project.

The ICC was inaugurated by President Benigno Aquino III just a week before the APEC meetings, after bidding for the second phase of the infrastructure project failed due to the controversy.

This November, APEC 2015 will come full circle as Manila hosts the last leg of the annual meetings.

Ahead of the AELM, a high-level gathering of top business leaders will take place from November 16 to 18 at the Makati Shangri-La hotel.

The APEC CEO summit will bring together some 800 delegates, policy makers, and business executives to discuss geopolitical issues in Asia-Pacific and the future of economic growth in the region.

The highlight of the week is the APEC Economic Leaders’ Meeting, which will be held on November 18 and 19 at the Philippine International Convention Center (PICC).

The 70,000-sqm PICC, which made history as Asia’s first international convention center, has been host to a number of political conferences, conventions, and concerts by world-renowned artists.

Designed by Leandro Locsin, National Artist in Architecture, the PICC opened in 1976 to host the annual meeting of the World Bank’s International Monetary Fund. – Rappler.com