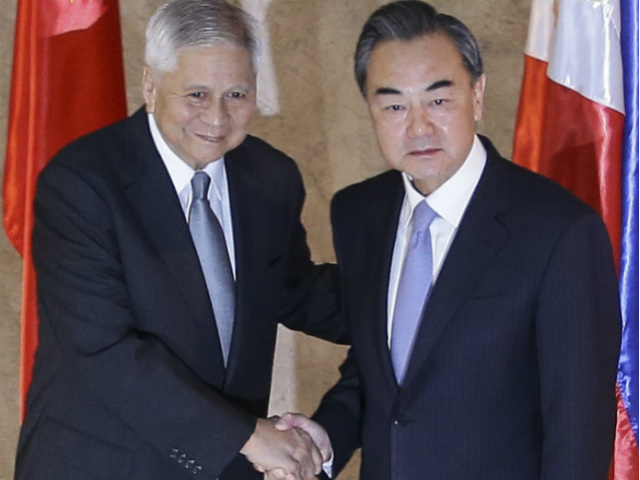 MANILA, Philippines (UPDATED) – To prepare for a key regional summit and to ease the tensions between the two countries, the Philippines and China on Tuesday, November 10, held their first bilateral meeting in two years.

DFA spokesman Charles Jose told Rappler that the last bilateral meeting between the two countries was in August 2013.

That was 8 months after the Philippines filed a historic case against China over the West Philippine Sea (South China Sea), and more than a year after tensions between Manila and Beijing heightened due to a standoff in Panatag (Scarborough) Shoal in the disputed waters.

Back then, Del Rosario and Wang met on the sidelines of the Association of Southeast Asian Nations (ASEAN)-China special foreign ministers’ meeting in Beijing, China.

In November 2014, Philippine President Benigno Aquino III and Chinese President Xi Jinping also met for 10 minutes, though informally. This was during a tree-planting ceremony on the sidelines of the Asia-Pacific Economic Cooperation (APEC) Chief Executive Officers’ Summit in Beijing, China.

Chinese Foreign Ministry spokesman Hong Lei said Wang on Tuesday wanted to “meet with the leadership, the foreign secretary, and other senior officials of the Philippines, comparing notes on and making preparations for” Xi’s trip to the Philippines.

Hong said, “They will also exchange views on how to improve the relationship between China and the Philippines.”

On Tuesday, Wang also paid a courtesy call on Aquino to discuss preparations for the APEC Summit. Aquino assured Wang “that it is in the culture of the Filipinos as hosts to make our guests feel the warmth of Filipino hospitality,” Aquino’s spokesman Herminio Coloma Jr said.

China to PH: Meet us halfway

Tuesday’s bilateral meeting comes as the Philippines and China remain locked in a dispute over the West Philippine Sea.

Weeks before this, the Philippines won the first round of its case against China before an arbitral tribunal based in The Hague, The Netherlands.

Hong explained: “The bilateral relationship is beset by difficulties due to reasons known to all. This is not what the Chinese side wants to see. The Chinese side attaches importance to its relationship with the Philippines and stays committed to properly resolving relevant issues through consultations and negotiations.”

Referring to the meeting between Aquino and Xi in 2014, Hong added: “It is hoped that the Philippine side will meet China halfway, implement the important consensus reached by leaders of the two countries during last year’s APEC Economic Leaders’ Meeting, constructively handle relevant issues, and create the atmosphere and conditions for the return of bilateral relations to the right course of development.”

Wang’s visit to Manila is, in itself, a significant event.

This is because two years ago, Del Rosario already invited Wang to the Philippines after “testy exchanges” reportedly between the two of them. This was during a closed-door meeting in an Association of Southeast Asian Nations forum in Brunei.

Back then, Reuters reported a “departure from the usual diplomatic niceties” on Del Rosario’s part.

During the meeting, Reuters said, “Del Rosario was not scheduled to speak, but after hearing Wang’s speech at Sunday’s closed-door meeting in the kingdom of Brunei, he raised his hand and proceeded to rebut China’s allegations one by one, according to Philippine diplomats.” – Rappler.com