Nov 11, 2015 6:47 PM PHT
Mara Cepeda
Facebook Twitter Copy URL
Copied
(2nd UPDATE) The Supreme Court decides to abandon the condonation doctrine, which was used by Junjun Binay to defend himself, but says the nullification applies only to future cases 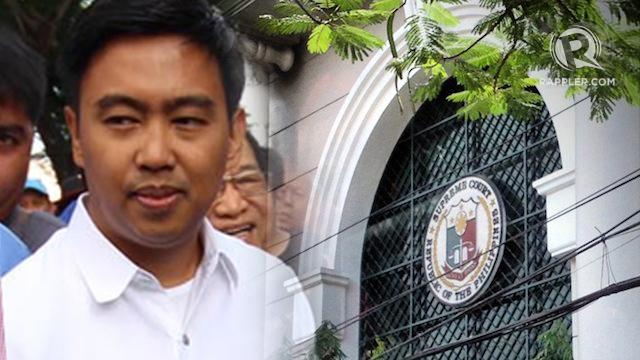 MANILA, Philippines (2nd UPDATE) – The Court of Appeals (CA) has the power to review and stop orders issued by the Office of the Ombudsman against elected officials, the Supreme Court (SC) ruled in a verdict issued on Wednesday, November 11.

The ruling in effect upheld the CA’s first order in March 2015 stopping the first suspension order of Makati Mayor Jejomar Erwin “Junjun” Binay Jr. At the time, the Ombudsman insisted on the suspension, saying the CA had no right to intervene in the case.

However, while the CA had the right to issue the temporary restraining order (TRO) against the Ombudsman, this act had already been rendered moot by the final decision of the Ombudsman in October to dismiss Binay and bar him from holding any public office, according to the Supreme Court.

“With this, the ensuing course of action should have been for the CA to resolve the main petition for certiorari in CA-GR SP No 139453 on the merits. However, considering that the Ombudsman, on October 9, 2015, had already found Binay Jr administratively liable and imposed upon him the penalty of dismissal, which carries the accessory penalty of perpetual disqualification from holding public office, for the present administrative charges against him, the said CA petition ought to be dismissed on the ground of mootness,” the ruling said.

The same SC verdict also nullified the so-called condonation doctrine, which was used by Binay to defend himself. Yet in the same breath, the Court also said that the abolition of this doctrine applies to future cases, not Binay’s.

In a press briefing, SC Public Information Office chief Theodore Te said the High Court, voting 10-0, struck down a provision in the Ombudsman law that prevents any court – apart from the SC – from issuing orders that would delay the Ombudsman’s investigation.

Ombudsman Conchita Carpio-Morales used this provision to question the appellate court’s decision to stop the 6-month preventive suspension of Binay.

In March, the Ombudsman slapped Binay with his first suspension order over his alleged involvement in the overpricing of the controversial Makati city hall parking building II.

Binay then took the case to the CA, invoking the doctrine of condonation, which absolves an official of administrative liability committed while he or she was in office should the public official be reelected.

The CA ruled in his favor. (READ: Trillanes: CA justices got P50M for Binay orders)

The Ombudsman then filed a petition before the High Court, arguing that the TRO issued by the CA is illegal because Section 14 of Republic Act No 6770 gives the power to review and stop the Ombudsman’s orders only to the SC. (READ: Justices to Ombudsman: Why fight CA powers only now in Binay case?)

However, the SC ruling issued by Associate Justice Estela Perlas Bernabe declared Section 14 ineffective “until the Court accepts the same as part of the rules of procedure through an administrative circular duly issued therefor.”

This means that the CA did not commit grave abuse of discretion when it issued Binay the TRO and the temporary injunction, the SC said.

The High Court also ruled 7-3 to abandon the condonation doctrine.

“The Court read the 1987 Constitution in relation to the Local Government Code provisions on discipline of public officers and found that the condonation doctrine is bereft of legal basis,” the SC ruling said.

The doctrine’s abandonment, however, applies to future cases and does not affect the Binay case.

The ruling exempts Binay because the CA granted him a TRO and a temporary injunction for his suspension back when the High Court still recognized the legality of the condonation doctrine.

“[The CA] was not precluded from considering the same since it was material to the propriety of according provisional injunctive relief in conformity with existing case law. Since condonation was raised by respondent Binay Jr in his Petition in CA-GR SP No 139453, the CA did not err in passing upon the same,” the SC ruling said.

Binay has accused the Ombudsman of political harassment. His father, Vice President Jejomar Binay, is running for president in 2016 under an opposition party.

Binay said he is “grateful” for the decision of the High Court.

(So finally, it was upheld by the Supreme Court. This is a big step in clearing my name that was tarnished by the cases filed against me.)

Binay said had the Ombudsman waited for the SC ruling concerning his first suspension order, he may have not been dismissed from office.

“I think this will have a strong implication on the dismissal that was imposed against me by the Office of the Ombudsman kasi rito nakadugtong ‘yung kaso (because this is connected to the case),” he said.

“For us, ang sinasabi ng mga lawyers ko (my lawyers are saying) that should be the effect now of the decision of the Supreme Court, recognizing the jurisdiction of the Court of Appeals. [Because now, we can apply the] basis for the issuance of an injunction for my case,” Binay added.

Copies of Carpio-Morales v CA and Bersamin’s concurring and dissenting opinion are found below: