APEC what? An explainer on Manila’s high-profile week Facebook Twitter Copy URL
Copied
What's the APEC buzz about, and what's in it for the so-called rising tiger of Asia? Rappler explains what happens in APEC, and what Manila gets out of hosting the summit.

MANILA, Philippines – Obama, Xi and Abe? Check. Flight cancellations at the notorious airport? Confirmed. Carmageddon on EDSA? Likely. Getting out of town? Sure.

The Philippines is pulling out all the stops to prepare for its weeklong global outing as it hosts the Asia-Pacific Economic Cooperation (APEC) summit in mid-November. So disruptive are the cancellation of work and classes, and the monster traffic jams that Filipinos coined a term for the experience: “APECtado,” a play on the local term for “affected.”

For the first time in nearly two decades, it’s the Southeast Asian nation’s turn to host 20 other APEC leaders for the region’s most high-level business event. From November 12 to 19, Manila will be the venue of a flurry of meetings bringing together a who’s who of global politics, business, and diplomacy.

While a lot of local media reports and online chatter focus on the hassle and expense of holding the event, organizers say there is more to APEC than the logistical nightmare, sleek BMWs on the road, or the Justin Trudeau craze.

What’s all the buzz about, and what’s in it for the so-called rising tiger of Asia? Here is Rappler’s explainer of APEC 2015. APEC is the highest-level, most influential economic forum in the Asia-Pacific. With 21 member economies, it accounts for nearly half of world trade, and about 57% of global gross domestic product (GDP).

Founded in 1989, APEC aims to promote free and open trade and investment. To do this, it acts like an incubator of ideas and policies where ministers, delegates, and technical experts try to find consensus on doing business but increasingly also focus on the social side of trade like environmental standards, the role of women, and health.

It’s not just a government affair. The private sector gets a say through the APEC Business Advisory Council (ABAC), which recommends policies to leaders. 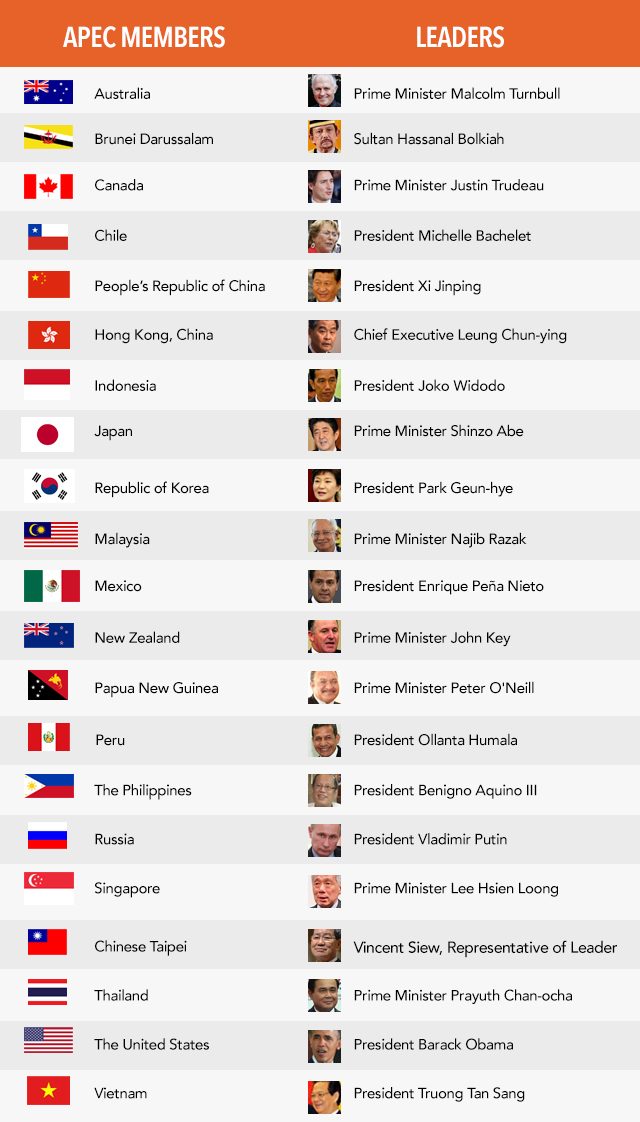 Marciano Paynor Jr, head of the APEC National Organizing Council, told Rappler that there are 12 confirmed leaders as of Monday, November 9, but all 21 are expected to attend.

They are called “economic leaders” and the members “economies” because APEC is a business forum. The leaders of Taiwan (called Chinese Taipei in APEC) and Hong Kong (Hong Kong, China) are also not considered heads of state as China considers these to be part of its territory.

Another leader flying to Manila is President Juan Manuel Santos of Colombia, a guest country. He will attend the Pacific Dialogue with the Latin American APEC members: Chile, Peru, and Mexico.

There are 7,000 delegates, including captains of business like Alibaba’s Jack Ma, Uber’s David Plouffe, and AirAsia’s Tony Fernandes. Two thousand foreign journalists will be stationed at the World Trade Center in Pasay, which serves as the International Media Center. CNN’s resident business traveler Richard Quest is on the list. The main event is the APEC Economic Leaders’ Meeting from November 18 to 19 at the Philippine International Convention Center in Pasay, where heads of economies endorse the so-called Leaders’ Declaration, a non-binding agreement.

“It is a summation of everything that has transpired in the 43 other prior meetings. That’s what the 21 economic leaders have decided in effect to be the year’s work,” said Paynor, a former ambassador and chief of presidential protocol.

Leading up to the meeting are the Concluding Senior Officials’ Meeting, and the ministerial meeting where foreign and trade ministers finalize the declaration.

Parallel events are a High-Level Dialogue on Inclusive Business, the SME Summit which Aquino will keynote, the ABAC meeting, and the CEO Summit where business titans will engage with the economic leaders. Out of breath? There, too, is a separate program for the leaders’ spouses.

The APEC week culminates the Philippines’ yearlong hosting of APEC. Under the theme “Building Inclusive Economies, Building a Better World,” Manila pushed for inclusive growth, and highlighted the role of small and medium enterprises (SMEs), which account for over 97% of businesses in APEC economies.

The choice of the theme is relevant as the supposed absence of inclusive growth is a common critique of the Philippines, Asia’s second fastest-growing economy in 2014 next to China. (READ: Making region MSME-friendly could be APEC 2015’s success)

Two key road maps will be endorsed: the Cebu Action Plan for financial integration aims to protect the region from financial crises, and the Boracay Action Agenda is meant to help micro, small, and medium enterprises (MSMEs) access the regional and global market.

One big side event is the meeting on the US-led Trans-Pacific Partnership (TPP), a deal to create the world’s largest free trade area that involves 12 APEC members, sans the Philippines.

The TPP is among the region’s alphabet soup of trade agreements, along with the China-led Free Trade Area of the Asia Pacific (FTAAP), and the Regional Comprehensive Economic Partnership (RCEP) of ASEAN members and other nations. Yes, APEC loves its acronyms. 5. How did the Philippines prepare for APEC, and why spend P9.8 billion?

The Philippines’ hosting of APEC was 3 years in the making. Preparations include the works: hotels, airport arrivals, transportation, venues, food, uniforms, and cultural presentations. Security is the biggest challenge as arrangements are much more complex than when the country first hosted APEC in 1996, or when it welcomed Pope Francis in January.

“The threat now is 10 times greater than it was in 1996. So there goes the challenge, and that’s why I said two-thirds of our efforts now are around security,” said Paynor.

The honor of hosting APEC comes with a price tag of P9.8 billion ($208 million). Critics raised their eyebrows but for Paynor, the yearlong expense is reasonable, and lower than what China spent on the leaders’ meeting alone.

“The money goes back to our economy. It pumps the economy. I’m making a comparison so everybody knows to each his own way of hosting. If [China] spent that much and they didn’t have that kind of money, that’s another story. But we spent X amount for the whole year. I think that’s a fairly decent amount,” Paynor said. 6. Booming economy? What about congested airports and roads?

Critics point out the irony of closing down the airport and roads, and calling off work for two to 4 days so the Philippines can showcase its turnaround from being “the sick man of Asia” to the continent’s “rising star” under Aquino’s watch.

“This is what we are given. We work around that, and we try as much as possible not to inconvenience the public,” he added. 7. What makes the Philippine hosting different?

This time, Manila’s come-on is the English proficiency and hospitality of Filipinos. From an initial 25, the Philippine meetings for 2015 ballooned to 44.

APEC leaders will also get to wear the barong Tagalog by designer Paul Cabral for the traditional family photo. 8. What does the Philippines get out of hosting APEC?

Many Metro Manila residents are taking a break but protesters won’t be on vacation. Major demonstrations are planned against what detractors call “socially destructive policies like privatization, deregulation and contractualization.”

The causes run the gamut from Lumads’ (indigenous peoples of Mindanao) human rights to the South China Sea dispute, and the military deal between Manila and Washington.

Others are critical of APEC’s actual accomplishments, and perceive the group as an exclusive bloc of power brokers and CEOs.

Philippine Star Columnist Boo Chanco wrote: “APEC itself is a mess. Its members have divided themselves into a pro-American TPP block and the Chinese led New Silk Road initiatives. Since the time I covered the first APEC meeting in Seattle, and that was over two decades ago, APEC had only been an expensive talkfest and junket at the expense of taxpayers.”

The verdict is out on whether benefits from hosting the summit will live up to the “inclusive” buzzword of the year. To organizers, the Twitter rants and noisy rallies already show a crucial facet of the Philippines that other APEC economies lack.

“You say what you want because this is a free country,” said Paynor. – Rappler.com