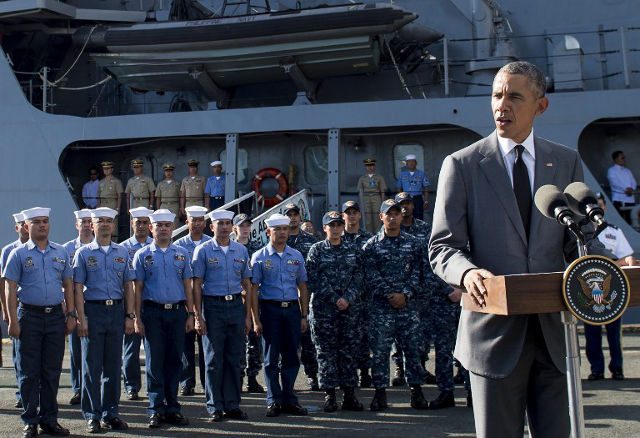 “The United States has been committed to the security of this region for more than 70 years, we have a treaty obligation, an ironclad commitment, to the defence of our ally the Philippines, who can count on the United States,” Obama said as he toured the Philippine Navy’s flagship vessel in Manila. In his speech before defense and military officials at South Harbor on Tuesday afternoon, Obama pledged to provide the Philippines 2 additional ships.

“We intend to transfer two additional ships to the Philippine Navy, a research vessel to help map its territorial waters, and another U.S. Coast Guard cutter to bolster the Navy’s ability to conduct long-endurance patrols,” Obama said.

The country’s two most capable warships – BRP Del Pilar and BRP Ramon Alcaraz – were acquired from the US in 20011 and 2013, respectively, through the Excess Defense Articlel program. They were decomissioned US Coast Guard ships.

Obama said it’s a part of US plan to increase support to the Philippines, one of Washington’s most loyal allies in Asia and one of the fiercest critics of China’s actions in the South China Sea.

In a statement, the US government said that the Philippines will get the most support from the US among its neighbors– a record $79 million in assistance to bolster maritime security. (READ: US pledges $259M to Southeast Asian allies) BRP Gregorio Del Pilar was once deployed to the disputed Scarborough Shoal during a standoff with Chinese ships in 2012. It was also used at the height of relief efforts in central Visayas, which was damaged by Super Typhoon Yolanda in 2013.

The Philippine government paid $13 million (P450 million) for the refitting and refurbishment of the vessel early in 2011.

In early 2014, the Philippine Navy started pushing for the purchase of its 3rd Hamilton class cutter from the US.

His visit to the South Harbor came at a time when the US military is flexing its military muscle in territories disputed by China and its Asian neighbors. The Philippines is in a maritime dispute with China over the West Philippine Sea.

US officials have said that the visit seeks to highlight US commitment to regional maritime security, as a “showcase” of US-Philippine maritime cooperation. – with reports from Agence France Presse/Rappler.com