Nov 18, 2015 10:35 AM PHT
Rappler.com
Facebook Twitter Copy URL
Copied
(UPDATED) 'As a treaty ally, we have a rock solid commitment to the defense of the Philippines,' the US President says 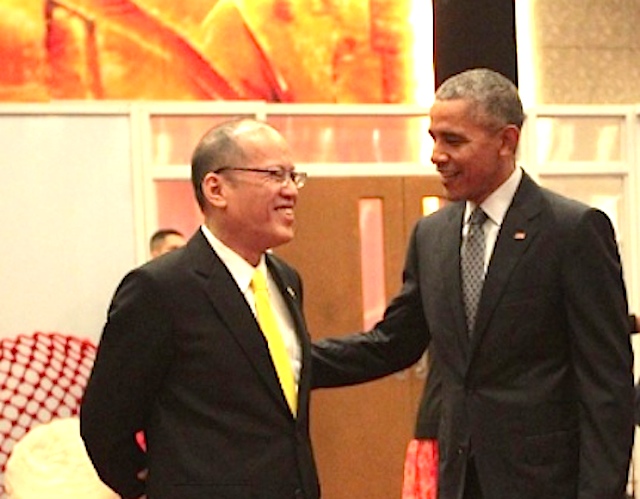 MANILA, Philippines (UPDATED) – The United States on Wednesday, November 17,  reaffirmed its “rock solid commitment” to the defense of the Philippines, which is embroiled in a maritime dispute with China.

“As a treaty ally, we have a rock solid commitment to the defense of the Philippines,” US President Barack Obama said in a joint press conference with President Benigno Aquino III after their bilateral meeting at the Sofitel Hotel, where he is billeted while attending the Asia-Pacific Economic Cooperation (APEC) summit.

It was a reiteration of a pronouncement he first made in a state visit to the Philippines last year, and when he met with Philippine defense and military officials on Tuesday, to check the Philippine Navy’s vessel BRP Gregorio del Pilar.

Obama was responding to questions on the Philippines’ arbitration case against China, which the US supports, and the PH-US Enhanced Defense Cooperation Agreement (EDCA) that is being questioned before the Philippine Supreme Court.

“Part of our goal is to continue to help our treaty partners build up capacity, to make sure that the architecture of both defense work, but also humanitarian work, and other important activities in the region are coordinated more effectively. And we think that the Enhanced Defense Cooperation Agreement is going to help us do that,” Obama said.

He expressed confidence that EDCA “would get done.”

“With respect to the Enhanced Defense Cooperation Agreement, obviously, the Philippines has to go through its process in the Supreme Court review. But we are confident that it is going to get done and we are going to be able to implement effectively the provisions and the ideas that have come forward during the course of these discussions,” Obama said.

In his opening statement, the US leader said that when implemented, the EDCA “will bring our militaries even closer together, and we are especially committed to ensuring maritime security in the region, including freedom of navigation.”

On the role of the Philippines in the US pivot to Asia, Aquino said that the Philippines is one of the oldest US allies in the region, and that both countries have a long-standing Mutual Defense Treaty inked in 1951.

In this context, he said, “the Enhanced Defense Cooperation Agreement seeks to make the operationalization of both forces that much more real.”

Aquino added that the EDCA will allow the Philippines to have access to the “most modern technology that will bring us into higher capabilities.”

“That is why we welcome now with very open arms this agreement pending before our Supreme Court,” he said.

The EDCA allows the US to have access to Philippine military bases. Aquino said this, in turn, will help the US “have more stability in its ability to project its own power within the region, in an effort to help in the stability and the orderliness and the diffusion of the tension with the region.”

In his opening statement, Obama said his Philippine visit – his second since his state visit last year – gave him another occasion to  reaffirm the US’ “unwavering commitment to the security and defense of the Philippines,” and tied it to “balikatan (shoulder to shoulder),” which is also the name of the annual PH-US joint military exercises.

“We stand shoulder to shoulder: ‘balikatan.’ I am grateful for my partnership with President Aquino who has been a valuable and trusted friend to the United States,” the US leader said.

In his opening statement at the joint press conference, Aquino said the 60-year-old defense and security alliance between the US and the Philippines “remains a cornerstone of peace and stability in the Asia-Pacific.”

He also said that the US’ continued security assistance to the Philippines, “helps us ensure that we can ably respond to current security challenges, particularly in the area of maritime security and maritime domain awareness.”

Aquino cited the recently-completed National Coast Watch Center (NCWC), built  with “significant” assistance from the US, one of the fruits of his 2012 US visit. – Rappler.com