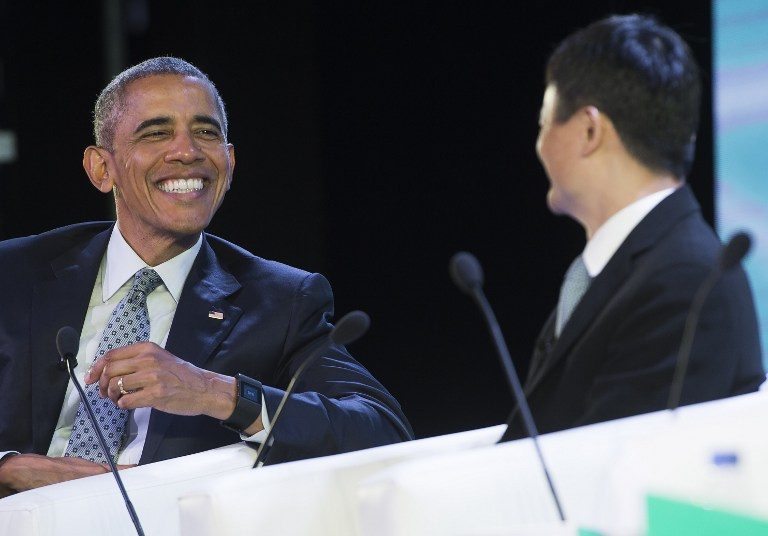 Facebook Twitter Copy URL
Copied
In a break from tradition, US President Barack Obama did not just deliver a speech at the forum but went on to moderate the panel with Jack Ma of e-commerce giant Alibaba, and Filipino engineer Aisa Mijeno, CEO of SALt

MANILA, Philippines – US President Barack Obama can consider one possible career when he steps down in 2016: panel moderator.

The American president showed off his humor and hosting skills as he moderated a panel discussion at the Asia-Pacific Economic Cooperation (APEC) CEO Summit in Manila, a posh event where Asia’s top government leaders and CEOs discuss doing business.

In a break from tradition, Obama did not just deliver a speech at the forum but went on to moderate the panel with Jack Ma of Chinese e-commerce giant Alibaba, and Filipino engineer Aisa Mijeno, CEO of SALt (Sustainable Alternative Lighting) on Wednesday, November 18.

History is made at APEC CEO Summit: @POTUS is the Moderator in conversation w entrepreneurs Jack Ma & Aisa Mijeno pic.twitter.com/AvxNCHm81Y

Mijeno explained that her company produces lamps that run on salt water, an idea that came when she observed a community in Kalinga in northern Philippines that had to walk down the mountain for 6 hours just to get kerosene.

When the entrepreneur mentioned that SALt is trying to look for a funder to mass-produce the lamp, Obama knowingly pointed to Ma, who in turn gestured his approval.

Obama quipped: “Serving as a matchmaker here a little bit!”

The panel was meant to illustrate Obama’s message in his speech that fighting climate change, and ensuring economic growth are not two opposite goals.

“Part of what we thought would be useful was to have a young, new entrepreneur, and a young at heart, but not as young large entrepreneur compare notes on why they think it’s good business sense as well as good environmental sense. And how we collectively can be supportive and encouraging of the kind of innovation they represent,” he said.

Obama pointed out that Ma is also a leader in environmental and climate change issues, and has worked with Microsoft’s Bill Gates on charities.

The US leader was so bent on sealing a partnership between Ma and Mijeno that the crowd laughed at his not so subtle pitch.

A favorite of late night US talk shows, Obama has been using innovation and technology to promote priorities of his administration. He recently opened a Facebook page where his first video promoted the global campaign against climate change. Obama was hesitant at the start of the panel, thinking there was a technical glitch.

“Is the mic on? Something’s going on. Huh? Is it working,” to which the audience responded with a loud yes.

He then went on to ask Ma about his company’s efforts to fund smaller firms and startups that have cutting-edge ideas on protecting the environment. Ma said he is collaborating with businesses, governments and scientists to promote environment-friendly enterprises.

“Asia is a perfect example of young entrepreneurs coming up with leapfrog technology,” Obama said. “In the same way, in large portions of  Asia, and Africa the old landline phones never got set up. People just went straight to mobile, and obviously they’re buying stuff through Alibaba from there all the time.”

Obama was equally enthusiastic about Mijeno and SALt. He asked her about challenges in scaling up her business, and then issued a caveat.

“She’s won, by the way, a lot of prizes, got a lot of attention so this is not like one of those infomercials where you order and you can’t make the thing work,” he said, drawing more laughter from the businessmen in the room.

Among Mijeno and SALt’s awards are the Kotra Award from South Korea, Asia Entrepreneurship Award in Japan, and the Woman in Business Startup of the Year in Malaysia.

The American president turned serious as he listened to Mijeno compare climate change to cancer.

“Finally at stage 4 you notice your health is declining. You get the best oncologists, pay the best hospital but it’s not working because everything is too late. Climate change is like that. Right now, we’re at stage two.”

Obama responded: “I’m just saying people! We don’t want to get to stage 4!”

He added: “We all have a huge investment in making sure our children, grandchildren and great grandchildren are able to enjoy prosperity and that’s dependent on the planet that accommodates us.”

Obama also regaled the Filipinos in the room by saying, “To our Filipino hosts, salamat po!” (Thank you.) – Rappler.com