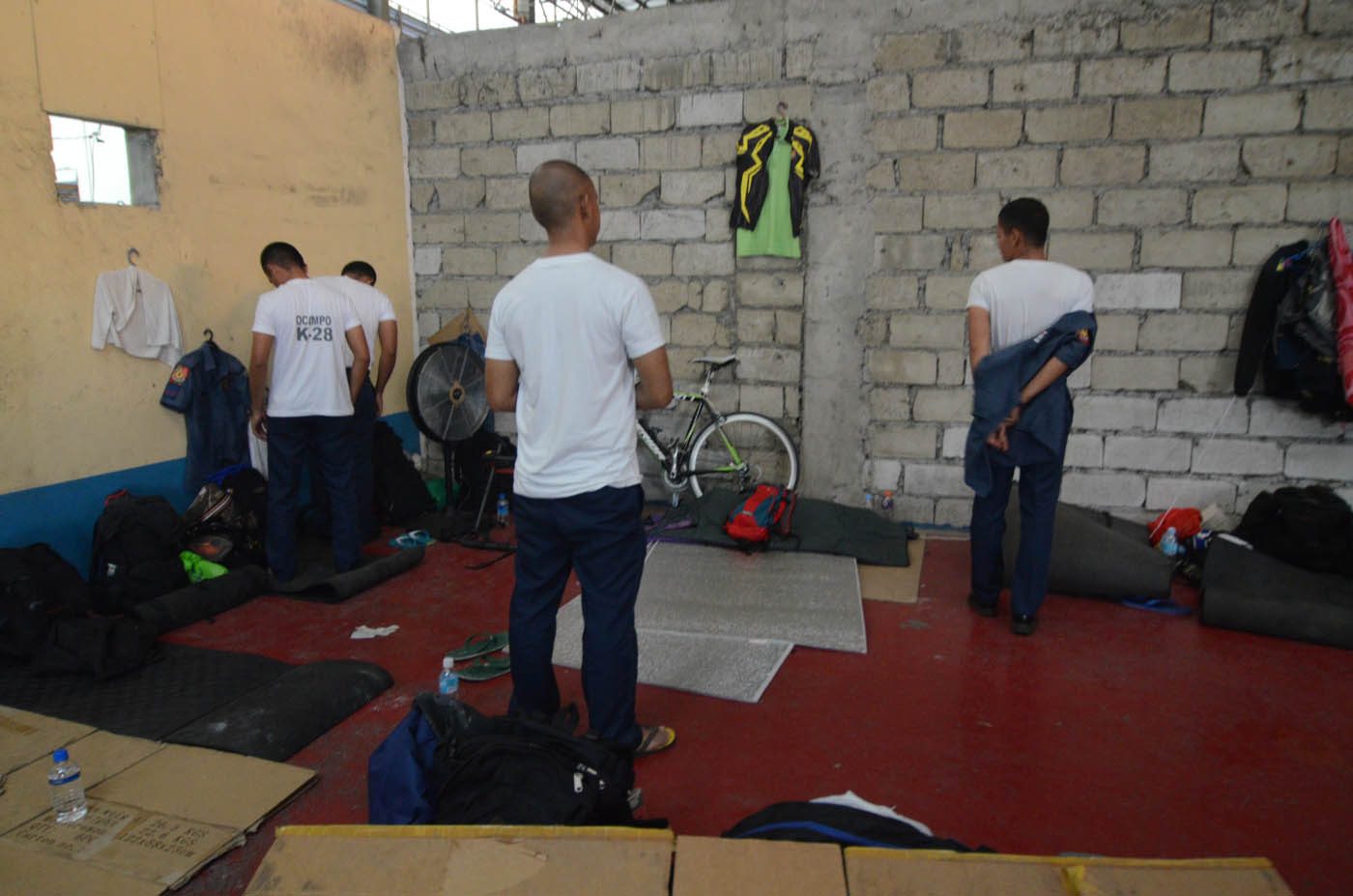 Facebook Twitter Copy URL
Copied
'You’re doing this for the community, for the country. The APEC is an important event and someone has to make sacrifices,' says one police officer.

MANILA, Philippines – As the sun set over Pasay City, a seemingly deserted warehouse along Diosdado Macapagal Boulevard slowly revved back to life. 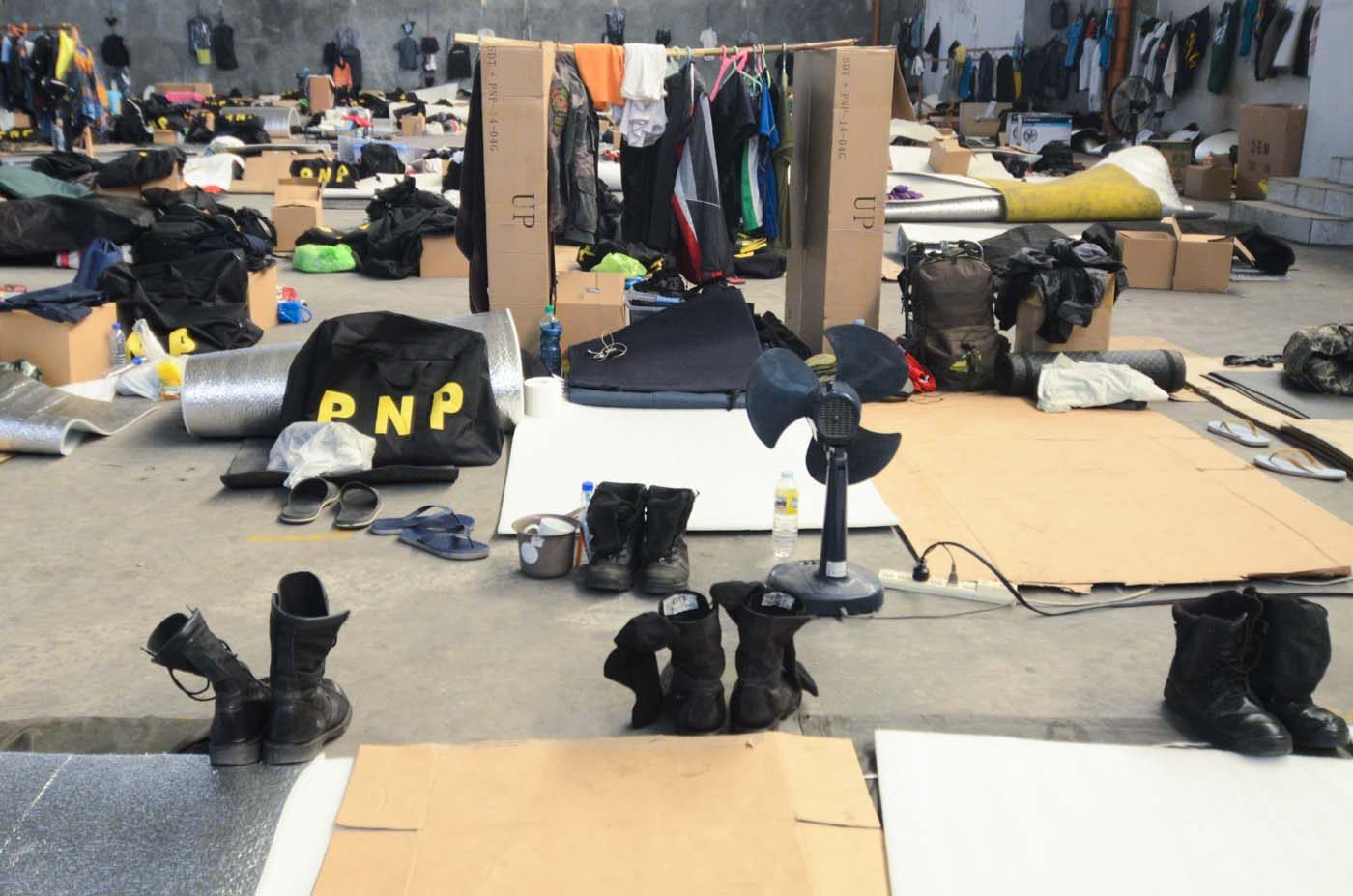 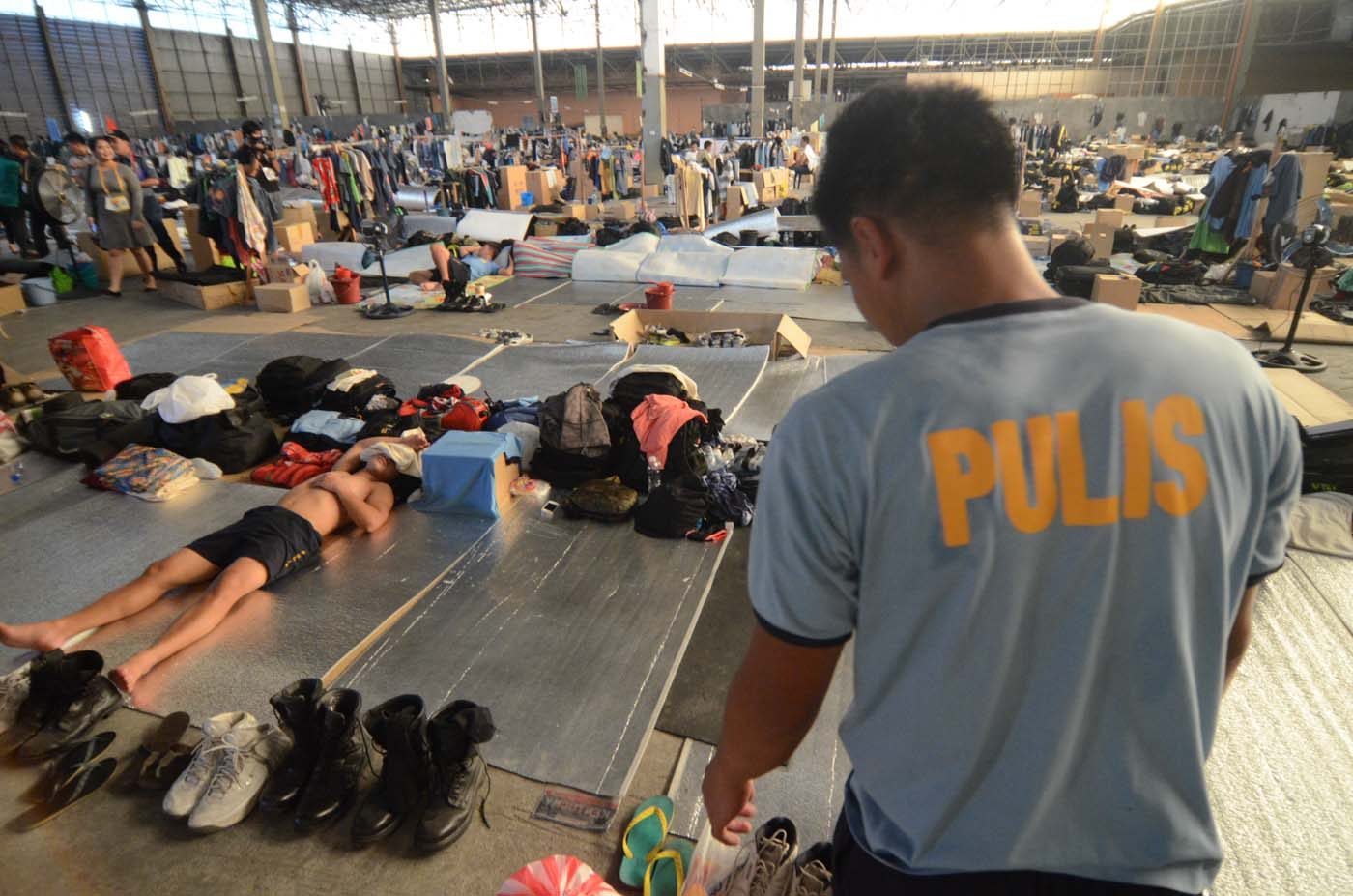 A handful of journalists walked around, taking in the sights and sounds of this warehouse-turned-police-headquarters. A tired and weary young cop stayed fast asleep on the floor, oblivious to everything else that was happening.

Welcome to the HK Sun Plaza warehouse, a place which over 3,000 cops have called home since last week, in the lead-up to the Asia-Pacific Economic Cooperation (APEC) Leaders Meeting from November 18 to 19, 2015. 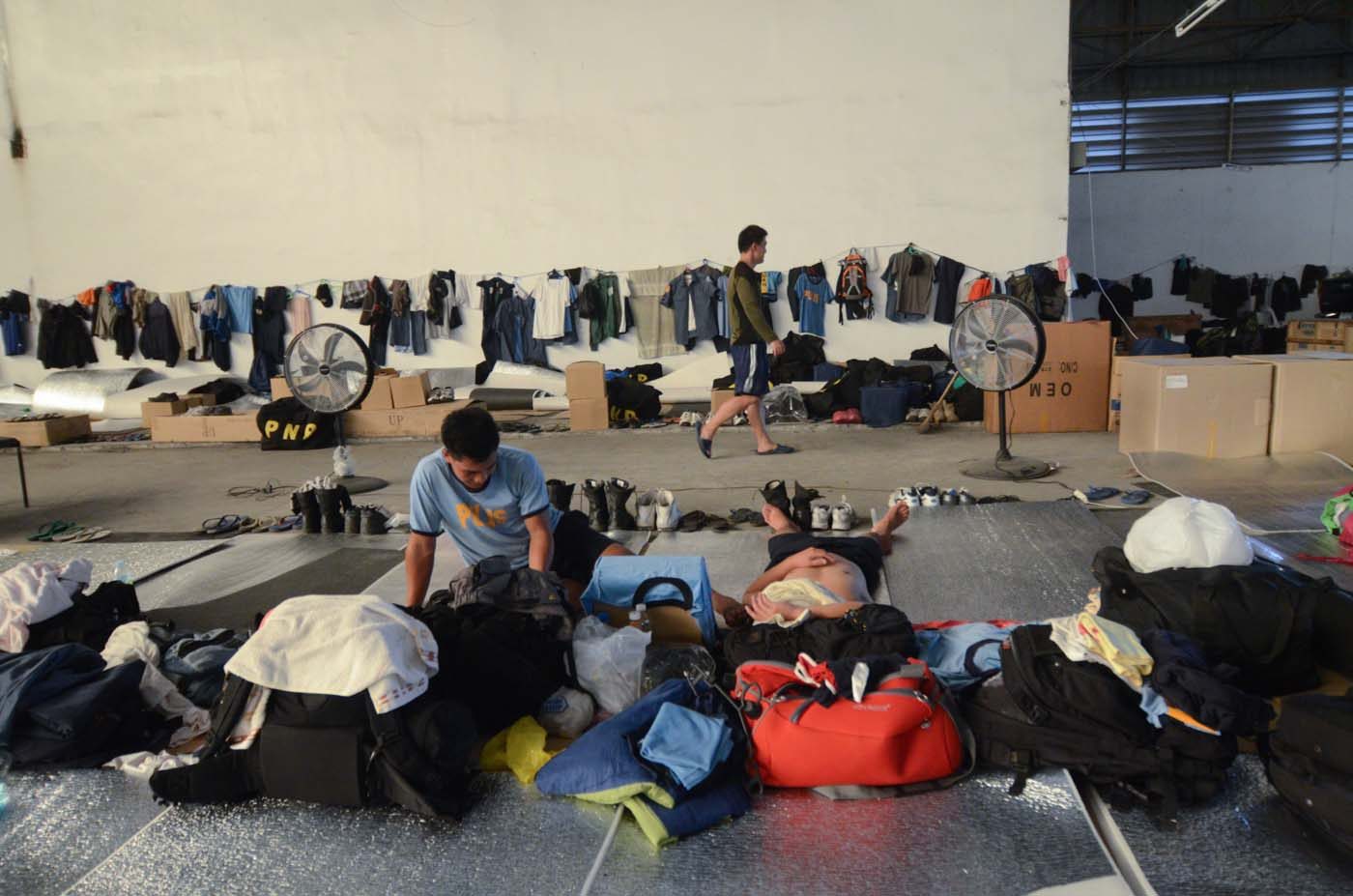 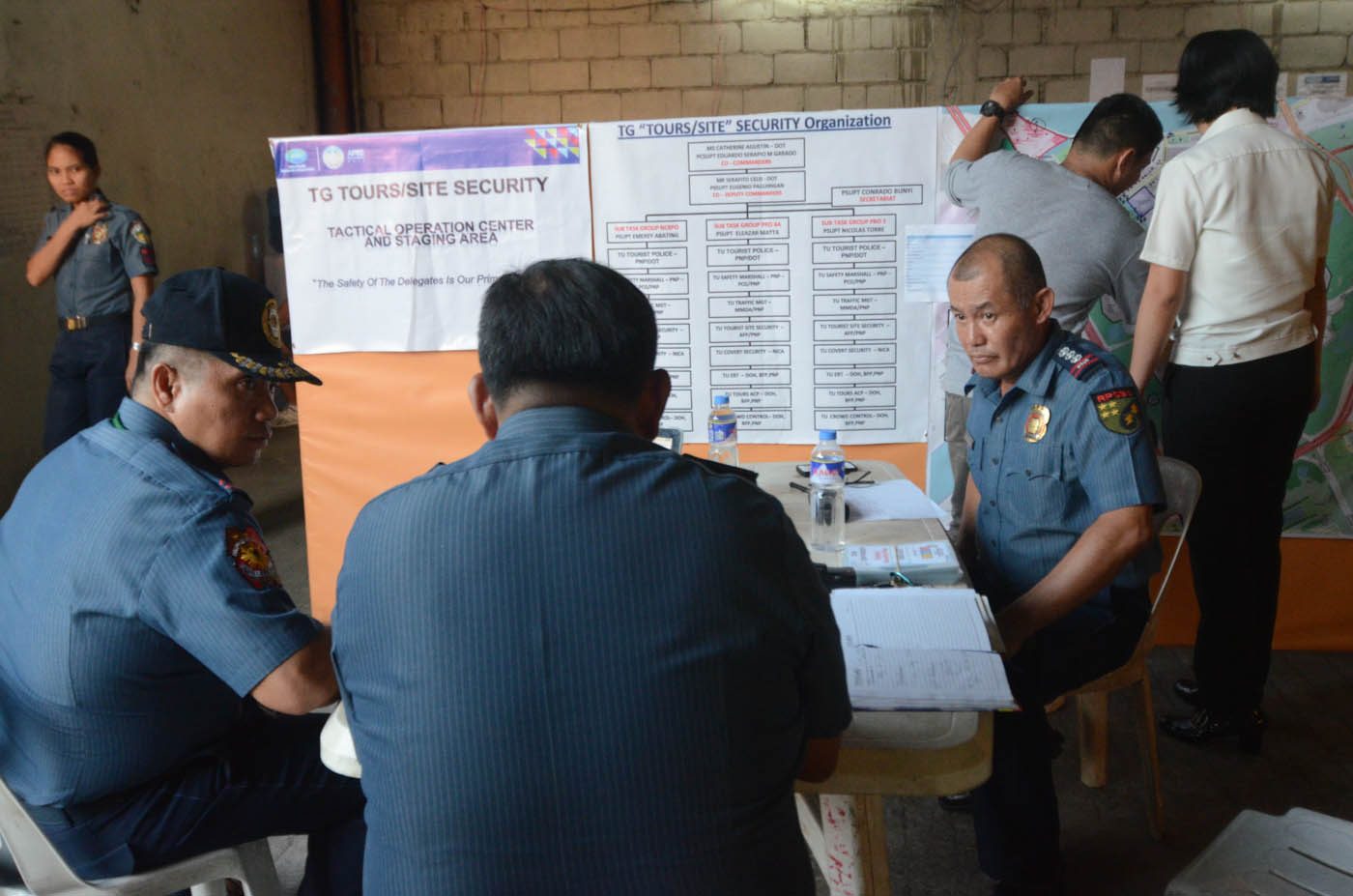 Superintendent Fred Ergo, from the Philippine National Police (PNP)’s Directorate for Logistics, says the basics are covered: cops sleep on mats, food and water is plentiful, there are more than enough electric fans, and clean bathrooms (over 72 shower heads and portalets).

It’s not much, but Ergo says it’s something all cops – young or old – have trained for. “If you’re a civilian and you see this, you’ll say it’s difficult. You see this and you say, it’s so difficult. But this is nothing compared to when you have to sleep in mountains during missions.” Police from the Cordillera, CALABARZON, and Western Visayas have been here since November 14. Most of them are Civil Disturbance Management (CDM) personnel tasked to disperse unruly and illegal protests during the week-long summit that is hosting world leaders and business powerhouses.

At night, entertainment comes in the form of a movie, flashed on the yellowing white walls of the 2,000-square foot bodega. Police Director Juanito Vaño, chief of the Directorate for Logistics, said the troops wanted to watch Manny Pacquiao.

But the bosses weren’t keen on the idea. “Baka ma-inspire pa magsuntukan bukas (They might get rowdy tomorrow),” one said in jest. Instead, it’s been a stream of Dolphy movies and other locally-made films. “It’s not that funds are lacking,” explained Vaño. “We just manage it properly. We were able to sufficiently provide yung mga essential requirements and needs ng mga pulis,” he said.

Police officials are aware of the criticism – over traffic, the inconveniences APEC has caused in Metro Manila, and of their supposed inability to attend to the needs of their troops on the ground. Some 28,000 cops from different regions in the country are now in Manila to secure the high-profile summit.

But they say they choose to brush it off and focus on the task at hand.

Ergo tells us: “If you’re determined, and you really want this job, you’ll be able to endure anything. While you’re here suffering, you think about the gladness in your heart, the gladness from the sacrifice. You’re doing this for the community, for the country. The APEC is an important event and someone has to make sacrifices.” All photos by Alecs Ongcal – Rappler.com