PH beefs up defense deals amid dispute with China 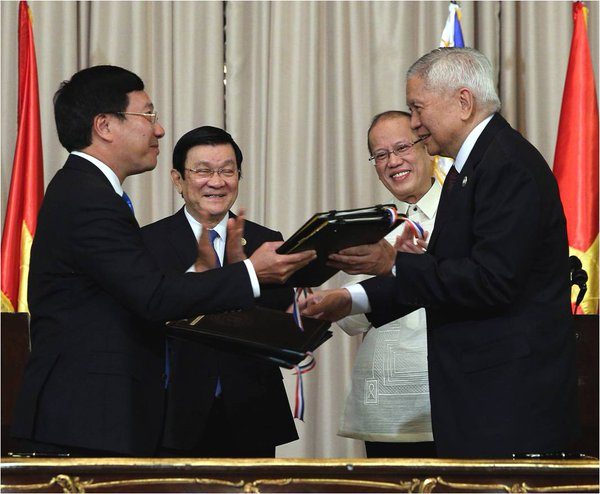 Facebook Twitter Copy URL
Copied
On the sidelines of the APEC Summit, the Philippines signs deals with Australia and Vietnam

MANILA, Philippines – Beyond gaining worldwide reputation as this year’s host of the Asia-Pacific Economic Cooperation (APEC) Summit, the Philippines managed to seize the opportunity to strengthen its defense agreements with other nations amid its maritime row with China.

The presence of Chinese President Xi Jinping did not stop the Philippines and its allies from strengthening their defense partnerships.

In several bilateral meetings between President Benigno Aquino III and other leaders, their top agenda was enhanced defense cooperation, a move widely seen to be directed at the current maritime disputes in the West Philippine Sea (South China Sea) involving China and claimant countries such as the Philippines.

There’s one agreement though that analysts see as an important step in defusing tensions over the disputes: the deal signed by Taiwan and the Philippines on Thursday, November 19, pledging non-violence in disputed fishing zones.

On defense deals, however, it’s been a harvest for the Philippines.

On Tuesday, November 17, the Philippines signed a strategic partnership with Vietnam.

The deal between the 2 countries aims to promote “strategic partnership on political, economic, agricultural, defense, maritime, security, judicial and law enforcement cooperation.” Details of the agreement, however, were not given.

The 2 countries are among the claimants of the South China Sea and have been the most vocal in their opposition to China’s aggressive reclamation projects in these contested waters.

Vietnam President Truong Tan Sang called the signing of the deal a “historic event” for the maintenance of stability and prosperity in the region.

“Mr. President and I shared our concerns over the recent developments in the East Sea or the South China Sea, affecting trust, peace, security and stability in the region. We also reaffirmed the importance of ensuring the stability, maritime security, safety and freedom of navigation and of flight in the South China Sea, as well as settling maritime disputes on the basis of international law including the 1982 United Nations Convention on the Law of the Sea,” he said.

The Philippines also signed a “comprehensive partnership agreement” with its longtime ally Australia.

Aquino said the agreement acknowledges the “increasing breadth and depth” of the 2 countries’ relations.

Palace Communications Secretary Sonny Coloma said the “strategic partnership” invokes an “over-arching framework and states general principles.” Both countries will craft the details of this partnership, he said.

The Philippine leader and Prime Minister Malcolm Turnbull also “exchanged views on regional security challenges, including maritime security, and, with this, committed to continue bilateral consultations on how to address them.”

“The Prime Minister and I committed to continue working closely towards more substantive and meaningful activities between the Armed Forces of the Philippines and the Australian Defense Force to build trust and confidence and enhance interoperability,” Aquino added.

Australia supports the Philippines’ stand on the peaceful resolution of the disputes in the South China Sea, even as it continues to provide military training and education to its Southeast Asian ally.

In 2007, the Philippines and Australia signed the Status of Visiting Forces Agreement (SOFVA), which was enforced in September 2012. The SOFVA establishes procedures for joint training and exercises of troops in both countries.

In the case of Japan, the two allies signed in June this year a Joint Declaration for a Strengthened Strategic Partnership and its Action Plan during Aquino’s state visit to Japan. China condemned this.

Both countries stressed that the partnership was meant to “reaffirm their strong commitment to ensuring maritime safety and security, including in the South China Sea, which is a vital element for peace and prosperity of the region.”

After a meeting with President Aquino on the sidelines of the APEC Summit, Prime Minister Shinzo Abe said Japan is open to Aquino’s request to send large patrol vessels to the Philippine Coast Guard, the main agency tasked to secure the almost 40,000-km coastline of the country.

“There was a request from President Aquino regarding the provision of large patrol vessels to Philippine Coast Guard, and Japan would like to consider the specifics of the matter,” Abe said in a joint press statement after the bilateral meeting on Thursday, November 19.

While Japan does not have a stake in the West Philippine Sea, it is locked in a dispute with China over another cluster of islands in the East China Sea.

In June, the Philippines and Japan conducted military training exercises off the coast of Palawan, a move criticized by China.

Aside from Australia, the country has a long-standing defense deal with the United States – the 1951 Mutual Defense Treaty. The new Enhanced Defense Cooperation Agreement (EDCA), which allows the US military to build its own facilities and preposition its defense assets inside assigned Philippine military bases, is pending with the Supreme Court over issues of constitutionality.

After his meeting with President Aquino, US President Barack Obama reaffirmed the US’ “rock solid commitment” to the defense of the Philippines.

The Philippine Navy will be getting a Hamilton-class cutter from the US Coast Guard, the yet to be decommissioned CGC Boutwell, which is the same class as the Philippine warship that Obama visited in Manila on Tuesday, November 17.

The White House said the ship “will provide the Philippines the ability to maintain greater maritime presence and patrols throughout its EEZ (Exclusive Economic Zone).”

The Philippines is crucial in US’ pivot in Asia. Obama expressed hopes EDCA would hurdle the legal battles in the High Court, saying the deal would allow Americans to “help treaty partners to build up capacity.”

In October, a US warship sailed in the disputed waters, a move widely welcomed by other claimant-countries but strongly opposed by Beijing. (READ: ‘Balance of power,’ Aquino says of US ship in West PH Sea)

Other countries, meanwhile, pledged support and expressed willingness to help the Philippines’ military and defense capabilities.

Prime Minister Dmitry Medvedev told Aquino that Russia “seeks to open avenues for military and defense cooperation” similar to its agreements with its adjacent states.

While Russia is an ally of China, it has not categorically backed its East Asian ally on the maritime row. (READ:Power play in the South China Sea)

The Philippines’ longtime ally, the US, meanwhile maintains a safe distance from Russia – except in the fight against terrorism and ISIS.

New Zealand, for its part, signed a memorandum of agreement on defense cooperation with the Philippines in 2012.

The agreement set out a framework for the conduct of meetings between senior officials and military representatives, education and training exercises, capacity building, and information exchange.