Philippines: China to build ‘Berlin Wall of the Sea’ 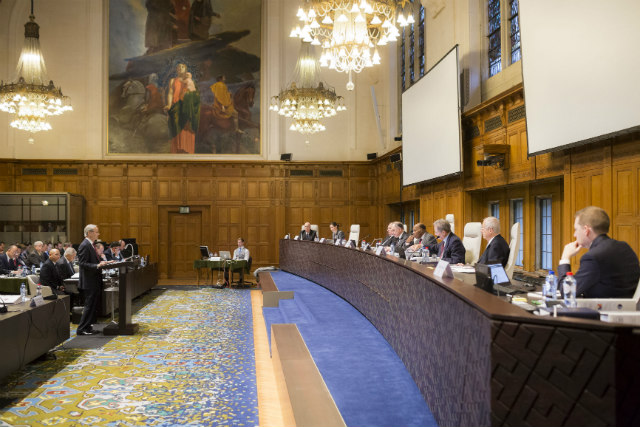 MANILA, Philippines – The Philippines warned a United Nations-backed tribunal in The Hague, Netherlands, that a ruling against Manila will pave the way for Beijing’s “Berlin Wall of the Sea” in the Asia-Pacific.

On the last day of hearings on the merits of its case against China over the West Philippine Sea (South China Sea), the Philippines also stressed: “What is ours is ours, not China’s.”

In his closing remarks, Philippine Foreign Secretary Albert del Rosario explained that a ruling against the Philippines will leave the country and the region “in worse straits than when we embarked on this arbitral voyage.”

“It would convert the 9-dash line, or its equivalent in the form of exaggerated maritime zones for tiny, uninhabitable features, into a Berlin Wall of the Sea. A giant fence, owned by, and excluding everyone but, China itself,” Del Rosario said on Monday, November 30.

The Philippines is seeking to invalidate the 9-dash line through its historic case against China in The Hague. (READ: EXPLAINER: Philippines’ 5 arguments vs China)

The Philippines argues that the 9-dash line is baseless under the so-called Constitution for the Oceans, the United Nations Convention on the Law of the Sea (UNCLOS).

What the UNCLOS allows is a 200-nautical mile exclusive economic zone (EEZ). Within this EEZ, a coastal state like the Philippines has the exclusive rights to fish and exploit sea resources.

Del Rosario said: “And when the Convention speaks of an ‘exclusive’ economic zone, I take exclusive to mean exclusive. That means it is ours, and what is ours is ours, not China’s.”

During the hearings that lasted from November 24 to 30, the Philippines made the following arguments as well:

‘We view China as a valued friend’

In his closing speech on Monday, Del Rosario also said UNCLOS “is itself at risk” in Manila’s case against Beijing.

He explained: “No State, no matter how powerful, should be allowed to claim an entire sea as its own and to use force or the threat of force in asserting that claim. No State should be permitted to write and re-write the rules in order to justify its expansionist agenda.”

“If that is allowed, the Convention itself would be deemed useless. Power will have prevailed over reason, and the rule of law would have been rendered meaningless,” he said.

He added that if the tribunal favors China, Filipinos can enjoy its resources in the West Philippine Sea “on China’s terms, if at all.” He said, “In the real world, that would mean not at all.”

“It would also perpetuate in another form, the same disputes, the same danger and the same instability that China currently exploits without restraint,” Del Rosario said.

“And this time it would be much worse: the possibility of a just solution obtained through arbitration will have been exhausted. We will have no other legal avenue of confronting China’s unlawful conduct,” he said.

At the same time, Del Rosario disputed China’s claim that initiating the arbitration case is “an unfriendly act” by the Philippines.

Noting that this year is the 40th anniversary of Philippine-China relations, Del Rosario said: “We view China as a valued friend. And it is precisely to preserve that friendship that we initiated this arbitration.”

The tribunal said China has until January 1, 2016, to comment on the Philippines’ oral or written arguments.

The Philippines, for its part, has until December 19 to “submit further written responses” to the tribunal’s questions.

The tribunal said it “now enters its deliberations and intends to issue its Award in 2016.” – Rappler.com