US barred from watching PH vs China hearing 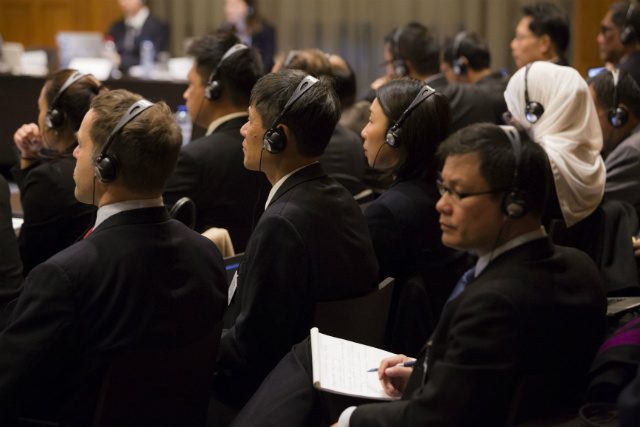 Facebook Twitter Copy URL
Copied
A UN-backed tribunal, on the other hand, allows the UK and 7 other countries to watch the proceedings

MANILA, Philippines – A United Nations-backed arbitral tribunal in The Hague, Netherlands, junked the request of the United States to watch the recent hearing on Manila’s case against Beijing.

This is because the US has not ratified the so-called Constitution for the Oceans, the United Nations Convention on the Law of the Sea (UNCLOS).

The hearing on the merits of the Philippines’ case ended on Monday, November 30. (READ: Philippines: China to build ‘Berlin Wall of the Sea’)

Earlier, the Philippines’ lead counsel against China, Paul Reichler, said it is a “disgrace” that the US has not ratified UNCLOS.

After all, he said, the US is “a great power” that “asserts important strategic interests in the South China Sea,” the subject of Manila’s case against Beijing.

Reichler also challenged the US to ratify UNCLOS to pressure China to heed this sea convention.

China is asserting its claim over the West Philippine Sea using the so-called 9-dash line, a demarcation that the Philippines says is baseless under UNCLOS. (READ: EXPLAINER: Philippines’ 5 arguments vs China)

While the US couldn’t watch the hearing on the sea dispute, however, the tribunal allowed other countries to do so.

In its statement Tuesday, the tribunal added that the United Kingdom “was granted permission to observe the proceedings, although it ultimately chose not to do so.”

The tribunal said the following countries received permission to watch the hearing, and attended the hearing as observers:

This is more than the number of observers when the tribunal held its first round of hearings on the case from July 7 to 13.

Back then, only 5 countries sent observers to the hearing, which sought to determine the tribunal’s right to hear the Philippines’ case.

In his closing remarks on Monday, Philippine Foreign Affairs Secretary Albert del Rosario thanked these observer-countries “for their presence.”

“Other countries, too, are watching to see what this tribunal will do,” Del Rosario said.

The hearing from November 24 to 30 involved the merits of the Philippines’ case.

The Philippines presented its oral arguments, which revolved around the Philippines’ right to fish and exploit resources in the disputed West Philippine Sea.

China, on the other hand, refused to join the proceedings because the tribunal supposedly has no right to hear the Philippines’ case. – Rappler.com