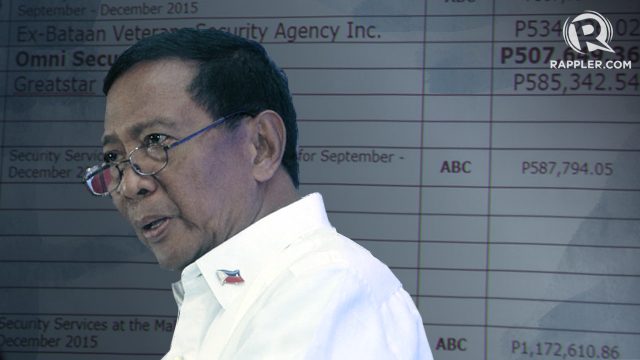 MANILA, Philippines (UPDATED) – The Makati City government has renewed the contracts of two alleged dummies of Vice President Jejomar Binay, to provide security and janitorial services for the city government.

Bidding documents obtained by Rappler on Wednesday, December 2, showed that Omni Security Investigation will continue providing security services for 13 city infrastructure projects, while Corporate Solutions Manpower and General Services Incorporated will be the janitorial services provider for at least 6 Makati buildings and establishments.

“[Omni and Corporate Solutions] showed legal papers po. It is not within the powers of the [Makati Bids and Awards Committee (BAC)] to not consider [them], especially [because] they are the lowest bidders,” said Peña in a text message sent to Rappler on Thursday.

“It only shows we’re transparent,” he added.

Corporate Solutions also placed bids for the janitorial services in the city hall compound, Ospital ng Makati, and several city covered courts. However, Rappler is still requesting copies of the notices of award from the Makati BAC.

Omni and Corporate Solutions were either the lone bidders or the companies that proposed the lowest contract prices during the bidding conference in September.

The two were once part of mother company Omni Security Investigation and General Services Incorporated, until the latter split into two in 2012. Its former president, Jose Orillaza, claimed during a Senate blue ribbon subcommittee hearing that he was a mere dummy for Binay, who was mayor of Makati for 21 years.

While Omni and Corporate Solutions are separate companies now, the bidding documents they submitted to the Makati BAC show they have a similar company address at 1343 Angono Street, Poblacion in Makati. (READ: How Binay ‘dummies’ cornered Makati contracts for a decade)

According to the bidding documents, the Makati BAC had initially disqualified Omni and Corporate Solutions as bidders after the technical working group discovered the two companies’ failure to comply with several requirements.

The Makati BAC issued a post-disqualification notice to Corporate Solutions on September 22 because it did not submit the following:

The city government also issued a post-disqualification notice to Omni the day after, this time for failing to submit the following:

In their motions for reconsideration (MORs), Omni and Corporate Solutions argued that the missing documents were not among those the Makati BAC had asked them to provide when it informed them that they placed the lowest calculated bids among all bidders.

When Makati BAC representatives conducted site inspections on Omni on September 11, and on Corporate Solutions on September 14, the city hall representatives asked the two companies to show them the original copies of the documents listed above, but did not request to be given photocopies.

Omni and Corporate Solutions then attached copies of the missing requirements in their MORs to show that they “had every intention to comply with [their] obligations and undertakings to your office (Makati BAC).”

The Makati BAC granted the MORs. It said in its October 5 resolution that the companies’ failure to submit the requirements “was merely due to excusable negligence.”

“The fact that they attached the document in their letter of reconsideration shows their good faith and intention to comply with the directive,” the Makati BAC added.

The Makati BAC also noted that the bids placed by Omni and Corporate Solutions were the “most advantageous” for the city government because they were the cheapest.

In a phone interview with Rappler on Wednesday, Makati BAC chairperson Danilo Villas maintained the body “followed the requirements of the Procurement Act” during the whole bidding process for the security and janitorial services. – Rappler.com