Dec 12, 2015 11:02 PM PHT
Pia Ranada
Facebook Twitter Copy URL
Copied
(UPDATED) One of the leading voices among vulnerable countries, the Philippines intends to accept the final version of the UN climate agreement without any changes 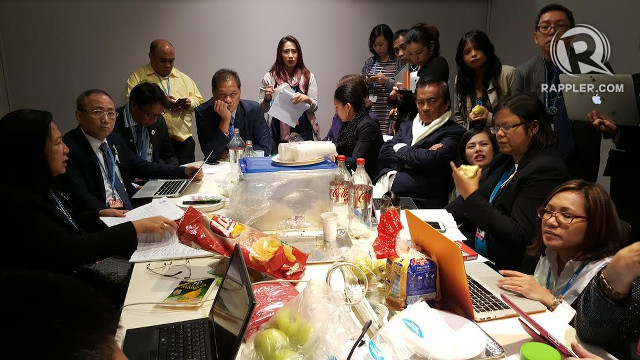 LE BOURGET, France (UPDATED) – The Philippines is set to adopt the UN climate change agreement as it appears in the latest draft, according to delegation spokesman Tony La Viña.

“We have recommended to the delegation head, Secretary Manny de Guzman, that the Philippines, in the plenary session that’s happening soon, adopt or recommend the adoption of the Paris agreement in toto, or without any change in the text because it already has the full package,” La Viña told Rappler a few minutes after a meeting of the Philippine delegation.

During the meeting, De Guzman, who heads the Philippine delegation, said the team would accept the latest version as the final agreement.

“This is a historic agreement. We’ve gone this far. Let’s maintain it,” he told the group who had gathered to analyze the clean text of the pact released by the French presidency of the UN climate summit in Paris (COP21).

This decision means that at a plenary slated to happen at 5:30 pm (12:30 am on Sunday, Manila time), the Philippines, represented by De Guzman, will declare the Philippines’ acceptance of the agreement.

The Philippines will also not join calls to open the text, meaning to put the agreement up for discussion again.

The UN climate pact, which may or may not be adopted by other countries at the plenary, is generally good for the Philippines, said La Viña.

In fact, some of its key provisions were penned by Philippine negotiators. (READ: 4 crucial things PH wants from the UN climate pact)

“The [government] agencies are quite happy about what we have here. We actually think we’ve shaped the agreement. That’s good for the Philippines, good for our people,” he told Rappler.

The major wins are the following:

Though the Philippines had wanted the concrete target of the agreement to be to hold global warming below 1.5°C instead of below 2°C, it’s still the first time that the 1.5°C target made it to a major climate agreement.

The Philippines’ “leadership in the CVF [Climate Vulnerability Forum] really made that possible,” said La Viña, referring to the country’s chairmanship of a group of high-risk countries who have been the strongest supporters of the 1.5°C warming cap.

The line in the preamble that requires actions against climate change to consider human rights obligations is also the “original language” that came from the Philippine team.

The final draft of the Paris climate agreement is the first international deal to mention “climate justice,” a phrase that means a lot for a country with negligible carbon emissions yet with among the greatest losses to climate-linked disasters.

‘Concerns’ with some provisions

Despite the gains, the Philippine team is still concerned with certain parts of the agreement.

For instance – a line stating that loss and damage from climate impacts cannot be the basis for establishing liability of carbon polluters.

But the good news is that this line is no longer in the operative part of the agreement, as it had been in a previous draft.

“It’s not part of the legally-binding language in the agreement so it’s not as harmful as it would be. Otherwise, it would be a red line,” said La Viña.

The current text still allows the Philippines to take it up again in the next UN climate change summit.

“But we recognize that this is a negotation and this will have to continue to really advance [these issues],” he added. – Rappler.com