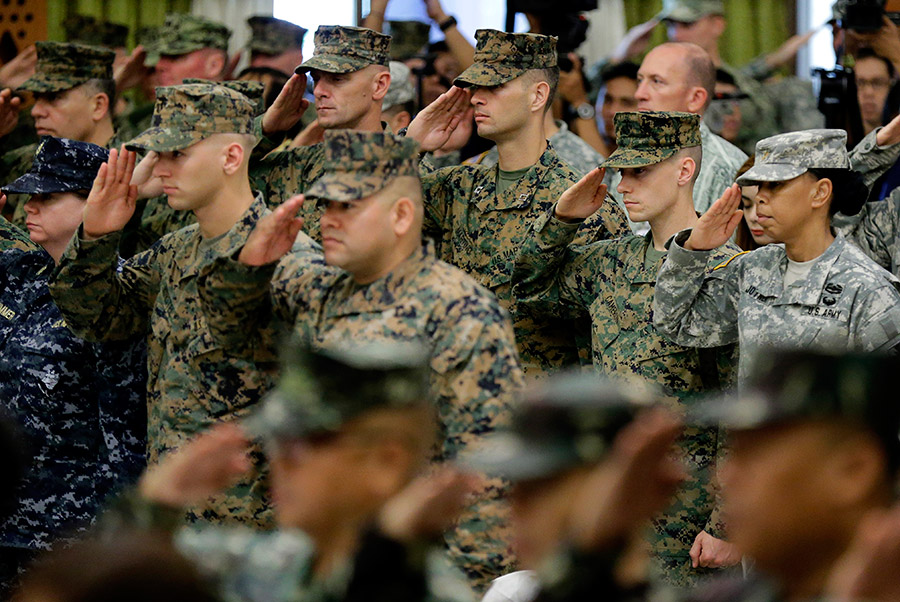 MANILA, Philippines (UPDATED) – Voting 10-4-1, the Supreme Court on Tuesday, January 12, declared constitutional the military deal signed by the Philippines and the United States in 2014 under the Aquino administration.

Among those who voted in favor of the PH-US Enhanced Defense Cooperation Agreement (EDCA) are Chief Justice Maria Lourdes Sereno, and Senior Associate Justice Antonio Carpio, who have issued separate concurring opinions.

Those who disagreed with the majority decision are Justices Arturo Brion, Teresita Leonardo-De Castro, Estela Perlas-Bernabe, and Marvic Leonen. Of the 4, Leonen and Bernabe are appointees of President Benigno Aquino III.

The ruling upheld the position of Malacañang that EDCA is an executive agreement and does not need the Senate’s concurrence.

“As it is, EDCA is not constitutionally infirm. As an executive agreement, it remains consistent with existing laws and treaties that it purports to implement….We hereby dismiss the petition,” the High Court ruled.

Te said the Court upheld the constitutionality of EDCA based on Article 18, Section 25 of the Philippine Constitution.

This “allows the President to enter into an executive agreement on foreign military bases, troops, or facilities if: (a) it is not the instrument that allows the presence of foreign military bases, troops, or facilities, or (b) it merely aims to implement an existing law or treaty and holding that the EDCA is one such executive agreement,” he said.

EDCA is an executive agreement that gives US troops, planes and ships increased rotational presence in Philippine military bases, and allows Washington to build facilities to store fuel and equipment there.

It was signed against the backdrop of the Philippines’ maritime dispute with China over the West Philippine Sea (South China Sea), and America’s commitment to come to its ally’s defense in case this escalates.

Proponents say the deal aims to help build the capacity of the Philippine military, one of the weakest in Asia.

In last year’s oral arguments at the SC, some justices acknowledged that it cannot disregard these issues when ruling on the constitutionality of the agreement.

Petitioners against EDCA questioned the deal before the High Court, arguing that it is a “de facto basing agreement,” which can only allowed by the Senate. It’s the Philippine Senate that shut down the US bases in the Philippines in a historic 1991 vote.

Philippine senators have insisted on their exclusive power to ratify EDCA. In November 2015, at least 15 of them voted to pass a resolution stating that the deal giving US troops wider access to Philippine bases is a treaty requiring the approval of the Philippine Senate.

But in its ruling, the Supreme Court said the executive agreement did not need the Senate’s concurrence.

The Visiting Forces Agreement – a treaty ratified by the Senate in 1999 – already allowed the return of US troops, said the SC spokesman.

“The VFA has already been proclaimed not unconstitutional, therefore the EDCA was found by the Court as simply an implementation of a previous treaty,” Te said.

In disagreeing with the Senate’s position that EDCA is a treaty that requires Senate concurrence, the SC cited the following reasons:

a) The President’s power to enter into executive agreements (different from treaties) not requiring Senate concurrence has been well-recognized and long upheld by the Court;

b) The Mutual Defense Treaty (MDT) continues to be a valid treaty, which the Court has, as recent as 2009, recognized;

c) A plain reading of the text of the Constitutional provision in Article XVIII, sec. 25 leads to the conclusion that it applies only to a proposed agreement between the Philippines and another foreign government whereby military bases, troops, or facilities of such foreign government would be “allowed” or would “gain entry” into Philippine territory.

“No court can tell the President to desist from choosing an executive agreement over a treaty to embody an international agreement, unless the case falls squarely within Article XVIII, sec. 25,” the SC said.

“In the field of external affairs, the President must be given a larger measure of authority and wider discretion, subject only to the least amount of checks and restrictions under the Constitution,” it added.

It’s a much awaited verdict. The High Court sat on the case for over a year.

EDCA also turned into an emotional issue following the death of Filipina transgender woman Jennifer Laude at the hands of US Marine Joseph Scott Pemberton. It revived old wounds involving the case of US serviceman Daniel Smith, who was accused of raping a Filipina.

Pemberton was in the Philippines for training exercises and the incident happened while he was in a furlough. A local court declared him guilty of homicide in December 2015.

The SC was finally supposed to rule on EDCA in November last year, with no less than Sereno and Carpio pushing for a vote at the time. But other justices asked for more time to draft their separate opinions.

Defense officials had hoped that the verdict would be timed with the visit of US President Barack Obama to Manila in November for the Asia-Pacific Economic Cooperation Summit.

Because it was pending with the Court, the two militaries have refused to divulge the final list of “agreed locations” which will be used for “security cooperation exercises, joint and combined training activities, humanitarian assistance and disaster relief activities, and such other activities as may be agreed upon by the parties.”

Based on EDCA, the Philippine locations, which will be provided to the US military without rent, may be accessed by American forces, contractors, vehicles, vessels, aircraft for the purposes of “training; transport; support and related activities; refueling of aircraft; bunkering of vessels and aircraft; temporary maintenance of vehicles, aircraft, and vessels; temporary accommodation of personnel; communications; prepositioning of equipment, supplies, and materiel; deploying forces and materiel; and such other activities that the Party may agree.”

EDCA has an initial term of 10 years and is automatically renewable.

It was signed by Defense Secretary Voltaire Gazmin and US ambassador to the Philippines Philip Goldberg on April 28, 2014, a few hours before Obama arrived for a state visit.

All decisions will be made by the Mutual Defense Board – Security Engagement Board, which is co-chaired by the chief of staff of the Armed Forces of the Philippines and the Hawaii-based commander of the US Pacific Command. (READ: DOCUMENT: Enhanced Defense Cooperation Agreement)

China in the background

The Philippines negotiated EDCA amid China’s aggressiveness in the South China Sea.

The Philippines has since filed a case against China before the Permanent Court of Arbitration to uphold the country’s 200 nautical mile exclusive economic zone based on the United Nations Convention on the Law of the Sea (UNCLOS). (READ: Philippines: China to build ‘Berlin Wall of the Sea’)

China, which claims almost the entire South China Sea, has launched massive reclamation in the disputed area a month after the signing of EDCA.

China started its reclamation activities in May 2014 or a month after EDCA was signed. It is believed to be currenty building runways in at least 3 reefs – Mischief Reef, Subi Reef, and Fiery Cross Reef. Four other reefs have been reclaimed.

The US Navy has been conducting freedom of navigation patrols in the West Philippine Sea, sparking tension with China. – with reports from Carmela Fonbuena/Rappler.com