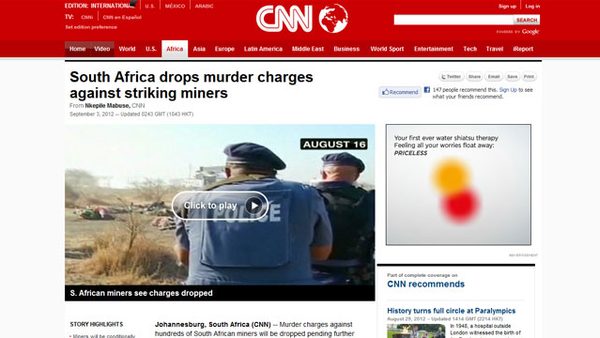 South Africa’s lead public prosecutor has dropped murder charges filed against 270 miners whom local authorities blame for the murder of 34 other miners during a protest in Marikina, South Africa last August 16. The 34 miners are believed to have been shot dead by police but authorities using a controversial law from the apartheid-era arrested and charged their fellow strikers. The “common purpose doctrine” was previously used by South Africa’s white minority to address black activists fighting for democracy. The incident has sparked national outrage with South African Justice Minister Jeff Radebe calling for an explanation into the charging of the miners. Radebe says the incident has “induced a sense of shock, panic and confusion.”  About 3000 miners have been on strike since August 10 demanding for higher pay. 10 people were killed during 3 days of clashes with the police. During the August 16 riot, police admit to have shot back when protesters started to attack. No police officer has been charged in relation to the incident pending a separate inquiry into the matter. The 270 miners will be released conditionally, pending investigations.

Read more on CNN and BBC.