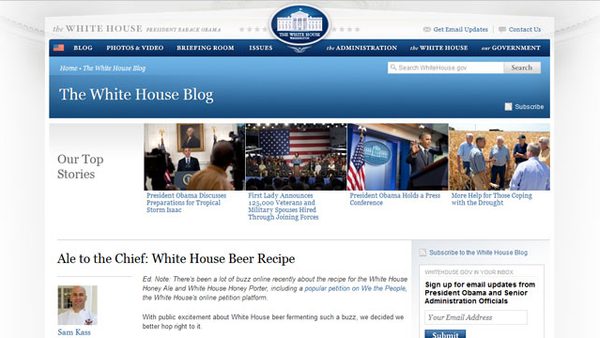 Beer drinkers all over the world have been fascinated with “White House Beer” since President Barack Obama mentioned it a few weeks back. Over the course of his campaign trail he has mentioned it several times, saying he enjoys one after a long day at the office. The President even took a question on the beer recipe during a recent chat with the tech website Reddit.  But despite an online petition calling for the release of recipe, Obama and other White House officials remained mum. That is until this weekend when the White House in a blog post entitled, “Ale to the Chief” released the recipe for two White House beers, “The White House Honey Ale” and “The White House Honey Porter”. The blog post also includes an instructional video. Some say the release of the recipe, and Obama’s willingness to have photos of him taken drinking beer is part of a campaign strategy that makes him more relatable to voters. Republican Presidential nominee Mitt Romney is a Mormon and does not drink beer.