Cardinal Tagle: Gift of self can overcome hatred 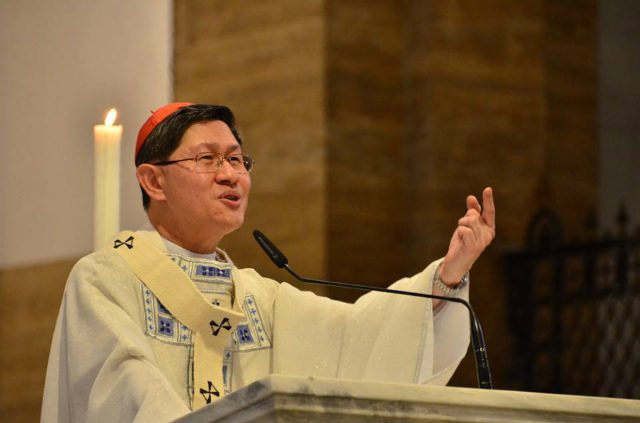 Facebook Twitter Copy URL
Copied
'Instead of hatred, Jesus said: 'This is my body for you. This is my blood for you,' Cardinal Tagle says

MANILA, Philippines – “Hatred can be overcome by a gift of self.”

For Manila Archbishop Luis Antonio Cardinal Tagle, the world needs this powerful message especially after the terror attacks in Paris that killed more than 120 people in November. (READ: Pope Francis on Paris attacks: ‘This is not human’)

Tagle said this is also one of the key points expected during the 51st International Eucharistic Congress (IEC), one of the Catholic Church’s biggest events. (READ: Pope Francis to send envoy to Cebu in 2016)

The IEC aims to discuss and celebrate the Holy Eucharist, described by Catholics as “the source and summit of the Christian life” because it revolves around the body and blood of Christ.

In a news conference on Monday, December 14, Tagle stressed the significance of the IEC in the face of world events like the Paris attacks, as well as the recently concluded climate change conference also in Paris.

Referring to the IEC’s importance in the context of the Paris attacks, Tagle told reporters, “The Eucharist is the sacrament not of violence but it’s the sacrament of love.”

The cardinal recounted the Last Supper, the night before Jesus Christ was crucified. It was about “friends betraying a friend,” Tagle said.

‘Seeing a brother, sister in an enemy’

Tagle said: “But how did Jesus respond to that betrayal? Instead of equal violence, instead of retribution, instead of hatred, Jesus said: ‘This is my body for you. This is my blood for you.’ Hatred can be overcome by a gift of self.”

He said the IEC is also important in the context of the 21st United Nations climate change conference or COP21.

In COP21, negotiatiors from all countries adopted an agreement to keep the global temperature rise below 2 degrees Celsius, and therefore avert a global disaster.

Connecting IEC to COP21, Tagle pointed out that the Eucharist “starts from creation and blesses creation.”

Tagle said: “Now this is a daily miracle in creation, and if we realize this, we hopefully wil be more responsible. Are we creating miracles in creation the way it happens in the Eucharist, or are we destroying creation? And are we destroying the human hands, the laborers?”

“There is a lot that this Eucharistic Congress can address in our day-to-day fears and our also concerns about the environment,” the cardinal said.

The Catholic Church expects up to 15,000 pilgrims to join the IEC. It foresees up to a million participants, however, in the IEC’s opening and closing Masses.

The IEC was last held in the Philippines in 1937. That 33rd IEC in Manila was the first in Asia. – Rappler.com