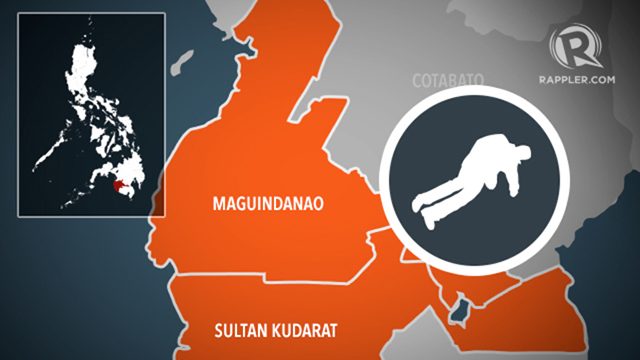 Facebook Twitter Copy URL
Copied
The Bangsamoro Islamic Freedom Fighters, a breakaway group of the Moro Islamic Liberation Front, owns up to the attacks as part of their Jihad or holy war

Lieutenant Colonel Ricky Bunayog, commanding officer of the 33rd Infantry Battalion, said BIFF troops, led by a certain Kumander Sukarno Sapal, attacked their detachment in Sitio Manilong, Barangay Banaba in Maguindanao at around 3 am Thursday, December 24. This resulted in a 3-hour gunfight.

Bunayog said other BIFF troops then separately attacked the nearby villages of Paitan, Sagasa and Takal in Esperanza town in the neighboring province of Sultan Kudarat.

In Barangay Paitan, two male farmers – aged 25 and 52 – were killed when the rebels passed by the farm yard. Rebel troops, Bunayog said, also hostaged civilians to escape the military chasing them.

In Sitio Sabaduan, Barangay Kauran in Ampatuan town, 5 farmers were killed when rebels captured them while working in the fields.

“They were shot one by one point blank after they were captured. Our information from the ground [is that] they brought their slain comrades during the retreat, some of their weapons’ accessories were also left,” Bunayog said, adding that his battalion killed 4 rebels.

The BIFF, a breakaway group of the Moro Islamic Liberation Front, owned up to the attacks as part of their Jihad or holy war.

Spokesperson Abu Misry Mama, however, insisted they did not kill civilian farmers as the military claimed, only members of the Citizen Armed Force Geographical Unit or paramilitary assigned in the area.

Meanwhile, police Chief Inspector Alma Almeda Ladera of Datu Abdullah Sangki town said they are on heightened alert due to tensions in the areas.

“We monitored some residents have evacuated but we have no data yet on exact numbers. We remain vigilant and we’re closely coordinating with local officials,” she said. – Rappler.com