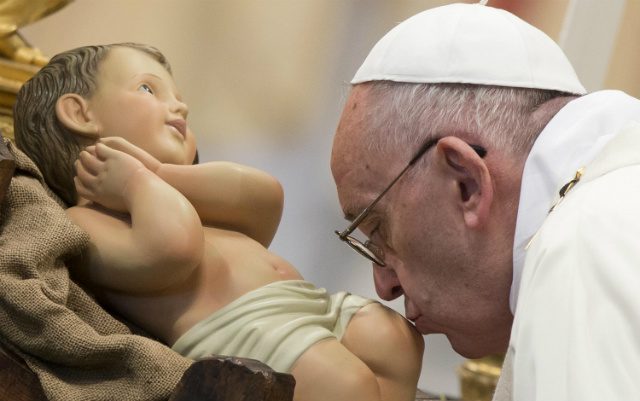 Facebook Twitter Copy URL
Copied
(UPDATED) Pope Francis ‘asks all believers to reject violence in the name of God,' as the BIFF claims the attacks as part of a 'holy war'

In a message sent through the Vatican’s embassy in the Philippines, Francis also prayed for peace in the southern Philippine island group of Mindanao.

“The Holy Father was deeply saddened to learn of the senseless killing of innocent people in Mindanao, and he sends condolences to the families of those who lost their lives,” Vatican Secretary of State Cardinal Pietro Parolin said in a message.

Vatican Radio said the Pope was referring to the killings perpetrated by “a breakaway Muslim rebel group…in a series of attacks on Christmas Eve.”

The Vatican relayed the Pope’s message to Lingayen-Dagupan Archbishop Socrates Villegas, president of the Catholic Bishops’ Conference of the Philippines, on Monday, December 28.

The Pope issued his statement after the Bangsamoro Islamic Freedom Fighters (BIFF), a rebel group in Mindanao, killed at least 11 people in Maguindanao and Sultan Kudarat on Christmas Eve.

The Philippine army said the BIFF’s victims included five farmers, whom the rebels captured while working in the fields. The rebels murdered two other farmers – aged 25 and 52 – as the BIFF members passed by a farm yard.

‘Reject violence in the name of God’

The group claimed the attacks as part of their jihad or holy war.

The BIFF earlier said it has pledged allegiance to ISIS. (READ: ISIS’ global ambitions and plans for Southeast Asia)

In his message, Parolin added the Pope’s wish for Mindanao: “His Holiness prays that security and safety will be established for all people in the region, so that dialogue, tolerance, and peace may enable each person to live free from fear.”

“He asks all believers to reject violence in the name of God who is love, and invokes abundant divine gifts of consolation, mercy, and strength upon those affected by this tragedy,” the Vatican secretary of state added.

When he visited the Philippines in January, the Pope also endorsed the peace process in Mindanao. The negotiations aim to end a 4-decade Muslim secessionist movement in predominantly Catholic Philippines.

When Philippine President Benigno Aquino III visited the Vatican earlier in December, the Holy See stressed that parties involved should ensure peace in the southern Philippines.

In a statement on Tuesday, the Autonomous Region in Muslim Mindanao (ARMM) regional government denounced the “barbaric attack,” and said this should further unite the region against terrorists.

“We should reject this as we should not be cowed by this.  In the face of this act of terrorism, we rely on each other for strength and courage,”  said ARMM Governor Mujiv Hataman.

He said that the BIFF attack was “devoid of any sense of revolutionary zeal and principles.”

He expressed confidence that the military and the police would contain the attacks and prevent any spillover to neighboring areas.

Hataman also said that the regional government and the Department of Social Welfare and Development have served 818 displaced families in Datu Abdullah Sangki town, and 335 families in Ampatuan. – Rappler.com