Enrile admits: Pre-trial will save time 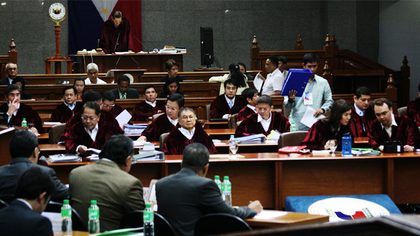 MANILA, Philippines – Senate President Juan Ponce Enrile said he will suggest to the prosecution and defense panels to hold a pre-trial.

The presiding officer in the impeachment trial of Chief Justice Renato Corona said a pre-trial will hasten the proceedings after the prosecution submitted a list of possible 100 witnesses.

Enrile said under the system called adversarial proceedings, the defense and prosecution teams can agree on topics that are needed, on one hand, and unnecessary, on the other, for inclusion in the trial. “Those are all in the rules.”

The presiding officer said the pre-trial will be held outside of the trial proper, and involves the heads of the two panels.

Earlier, lawyers have said that they were surprised why the Senate President did not agree to the holding of a pre-trial conference, which is usually done in an ordinary court by a judge

After initially doing away with a pre-trial, Enrile explained he decided to suggest one now because of the list of witnesses the prosecution submitted.

“But now because of the announcement that so many witnesses will be called, I think it’s thousands or hundreds or documents that they want to present. That will take time. You’ve seen the pace of the trial that’s why if possible, we want the two sides to talk. This is just a suggestion,” said Enrile in Filipino.

Prosecution spokesperson Romero Quimbo welcomed the proposal. While it can no longer be called a pre-trial, the Senate impeachment court,
defense and prosecution panels can agree to accept certain documents, such as the birth certificates of the children of the Chief Justice.

The prosecution has requested the impeachment court to subpoenae an officer of the National Statistics Office to testify that Corona’s children are indeed his children.

Quimbo  said if all camps can agree to accept certain documents, the prosecution will no longer need to call about 40 of the 100 people in their witness list.

But Quimbo said the proposal has to come from the Senate impeachment court. The defense panel will surely object to it if the proposal
comes from the prosecution, he said.

The trial enters its 8th day on Monday, January 30, and days after the prosecution submitted a list of at least 96 witnesses.

Some senators have expressed concern over this number, saying that if the prosecution intended to present all, the trial could last till the entire year. It would be bad for governance, said Sen. Francis Pangilinan. – With reports from Carmela Fonbuena/Rappler.com