MANILA, Philippines (UPDATED) – While President Benigno Aquino III continued to be the most appreciated and most trusted top Philippine official, Vice President Jejomar Binay regained lost public approval towards the end of 2015, the results of a Pulse Asia Research Incorporated survey showed.

Aquino scored 55% public approval in the nationwide survey conducted from December 4-11, 2015, a 1-percentage point improvement from the last poll conducted in September.

Binay was second with 52% – a 9-percentage point increase from his 43% rating in September – closely followed by Senate President Franklin Drilon with 51%, a 1-percentage point improvement over the last survey period.

“For the most part, public opinion concerning the work of these leading government officials remains generally unchanged between September and December 2015. At the national level, only Vice President Binay posts changes in his overall ratings – a 9-percentage point increase in his approval score and a 6-percentage point decline in his indecision figure,” said Pulse Asia president Ronald Holmes.

The other two officials in the survey, Speaker Feliciano Belmonte Jr and Chief Justice Maria Lourdes Sereno, both scored 29% public approval in December – a 3-percentage drop for Belmonte; unchanged for Sereno.

Holmes said that “indecision is the predominant sentiment concerning the work done” by Belmonte  (51%) “while nearly half of Filipinos (47%) are also unable to say whether they approve or disapprove of Supreme Court Chief Justice Maria Lourdes A. Sereno’s quarterly performance.”

He noted that across geographic areas and socio-economic classes, Aquino posted majority approval ratings in the Visayas (68%), Mindanao (62%), and Classes D (52%) and E (67%).

“Approval for presidential performance is expressed by half of those in the rest of Luzon (50%) and by a big plurality of Metro Manilans (42%). Nearly the same approval figures are recorded by President Aquino in the best-off Class ABC (44%),” the Pulse Asia chief said. On Binay, he said: “Most of those in the rest of Luzon (55%), Mindanao (52%), and Class E (66%) are appreciative of the performance of Vice President Binay in the last quarter of 2015. Near majority approval ratings are obtained by the latter in Metro Manila (46%), the Visayas (49%), and Class D (49%) while public assessment of vice-presidential performance is split three-ways in Class ABC (30% approval, 27% indecision, and 43% disapproval).”

Approval for the lawmaker’s work is the plurality opinion in Metro Manila (46%) and Mindanao (45%). And in Class ABC, Senate President Drilon registers practically the same approval and indecision figures (45% and 37%, respectively).

“The only other official who experiences a movement in his performance ratings in these sub-groupings is House Speaker Belmonte whose indecision figure goes up in the Visayas (+14 percentage points),” he said.

Among the top officials, only Aquino obtained majority trust ratings at 53%, 4 percentage points higher than in September.

“President Aquino obtains majority trust ratings from Visayans (64%), Mindanaoans (61%), and those in Classes D and E (51% and 64%, respectively). Big plurality to near majority presidential trust ratings are posted in Metro Manila (42%) and those in the rest of Luzon (48%). Essentially the same trust and indecision figures may be noted in Class ABC (43% and 31%, respectively),” Holmes said. 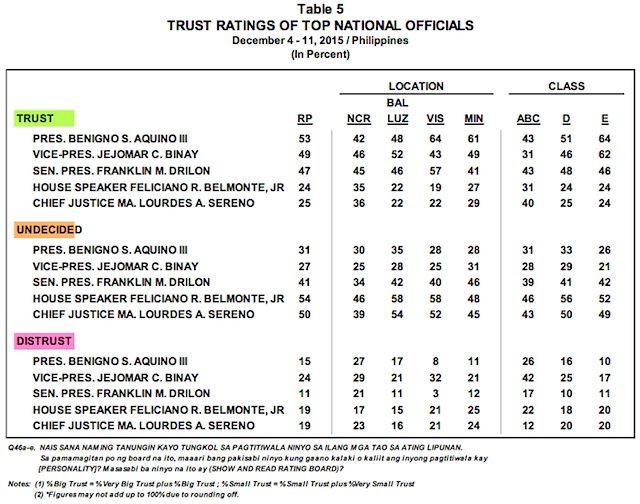 The Vice President registered the biggest jump in trust ratings – to 49% in December from 39% in September. Holmes said that “two majority trust scores are recorded by Vice President Binay across geographic areas and socio-economic classes – 52% in the rest of Luzon and 62% in Class E.”

But Binay also registered the highest distrust rating of 24%, though 3 percentage points lower than in September.

Among social classes, distrust in Binay is highest among the well-off Class ABC, spiking by 8 percentage points in December, or to 42% from 34%.

Holmes said trust in Binay “is expressed by big pluralities to near majorities in Metro Manila (46%), the Visayas (43%), Mindanao (49%), and Class D (46%). Public assessment of vice-presidential trustworthiness is split three-ways in Class ABC (31% trust, 28% indecision, and 42% distrust).”

Drilon’s trust rating is unchanged at 47%. Among geographical locations, he obtained majority trust of 57% only from his fellow Visayans.

Belmonte obtained 24% trust of Filipinos – 5 percentage points lower than in September – while Sereno’s trust rating is at 25%, from 26%.

“One in two Filipinos (50%) is unable to say if he/she trusts or distrusts Supreme Court Chief Justice Sereno while ambivalence is the majority sentiment toward the trustworthiness of House Speaker Belmonte (54%),” Holmes said.

Malacañang said on Wednesday that the boost in the trust and approval ratings of the President among the poorest Class E – an increase of 10 and 8 percentage points, respectively – “indicates a growing support for the government’s programs and initiatives that benefit the poor and marginalized sectors of our society.”

“We are greatly humbled by the show of support and trust by our citizens even as we continue to serve with greater passion and determination in order to deliver on vital social reform and development programs in the remaining months of the administration,” said Palace Communications Secretary Herminio Coloma Jr.

In the weeks leading to the survey, and during the survey period, the dominant issues included the filing of certificates of candidacy (COCs) of aspirants in the 2016 elections, the Senate Electoral Tribunal decision favoring Senator Grace Poe‘s assertion that she is a natural-born Filipino, and the Commission on Election (Comelec) divisions favoring the cancellation of Poe’s COC.

The other major issues were the dismissal of Makati Mayor Jejomar Erwin “Junjun” Binay Jr over the alleged overpricing of the Makati City Hall Building II, the Philippines’ hosting of the Asia-Pacific Economic Cooperation (APEC) Summit, the guilty verdict on US Marine Lance Corporal Joseph Scott Pemberton in connection with the death of Filipino transgender Jennifer Laude, the commemoration of the second anniversary of Super Typhoon Yolanda (Haiyan), and the Paris climate change talks.

During the period, the Philippines concluded its arguments before the Permanent Court of Arbitration in The Hague, Netherlands, on its case against China.

The survey was conducted among 1,800 registered voters 18 years old and above.