SAF 44 used for politics? That’s for public to say – PNP 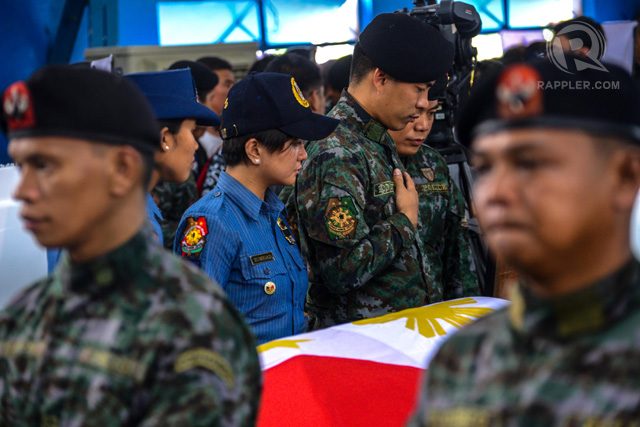 Facebook Twitter Copy URL
Copied
The police general who headed the PNP's probe into the controversial operation says they've already moved on but adds, 'We'll have to move on again'

MANILA, Philippines – They’ve long moved on from an operation that claimed the lives of 44 elite cops and revealed cracks in their leadership but by the end of January, the Philippine National Police (PNP) will again have to face the ghosts of the controversial “Oplan Exodus.”

“Nag-move on na kami. Mag-momove on ulit kami (We’ve already moved on. We’ll have to move on again),” Police Director Benjamin Magalong, who headed the Philippine National Police (PNP)’s probe into the January 25, 2015 operation, told reporters in a chance interview on January 6, Wednesday.

“Oplan Exodus” was a top-secret police operation targeting terrorists wanted by both the Philippine and the United States governments.

Although the PNP’s Special Action Force (SAF) killed one of its targets, more than 60 people, including 44 of the SAF’s own, died during the operation which saw cops battle Muslim rebels and private armed groups in the conflict-torn fields of Mamasapano town in Maguindanao.

Exactly a year after, the Senate will re-open the probe into the controversial operation, which endangered the proposed Bangsamoro Basic Law (BBL) and saw President Benigno Aquino III’s approval ratings plummet in its aftermath. (READ: DILG chief on re-opening of Mamasapano: Respect previous probes)

Magalong, who headed the Board of Inquiry (BOI), said they’ve been reviewing their report and related documents to prepare should they be summoned by the Senate anew.

A lot of things have happened since the probes into the operation ended. One of the police generals who was part of the BOI has since retired, leaving only Magalong and Chief Superintendent John Sosito.

The Senate’s re-opening of the probe was requested by Senator Juan Ponce Enrile, who claims to have new evidence and personal knowledge on the operation. When the probe began in February last year, Enrile was detained inside Camp Crame over the so-called “pork barrel scam.”

Politics in the probe?

Many of the characters in the probe have since declared plans to run in 2016. Senator Grace Poe, head of the Senate committee leading the inquiry, is running for president. Former interior secretary Manuel Roxas II will also be running for president, under the ruling Liberal Party.

The former SAF chief who the PNP found to have committed lapses before and during Exodus, retired Police Director Getulio Napeñas, is running for senator under the opposition United Nationalist Alliance (UNA).

UNA’s standard-bearer Vice President Jejomar Binay is also a staunch critic of the Mamasapano operation. In his counter-State of the Nation Address in August 2015, Binay cited the SAF 44 as proof of Aquino’s insensitivity. (READ: Binay uses SAF 44 to hit Aquino)

But police officials on Wednesday were quick to downplay speculation that the probe – and the SAF 44 – would be used for political gain.

“I think that will be best answered by the public and not the PNP. Because that is public perception,” Chief Superintendent Wilben Mayor, PNP spokesman, said in a separate interview with media.

Presidential Spokesman Secretary Edwin Lacierda also distanced the administration from speculation that politics was behind the re-opening of the probe.

“We do not wish to impute motivations on the part of the legislators. There is a decision for them to reopen. As we have said, all the pertinent personalities have given their testimonies before the Senate – and both the House and Senate,” he told reporters.

Following the release of the BOI, the Senate committee also released its own draft report, followed by the Moro Islamic Liberation Front (MILF)’s investigation, the International Monitoring Team (IMT)’s probe and eventually, the Department of Justice (DOJ)’s investigation which included recommendations for charges against certain individuals.

Among other things, the investigation found lapses on the part of Aquino, retired SAF chief Napeñas, and former PNP chief Director General Alan Purisima, who has since been dismissed from the PNP.

Nothing, everything to lose?

Enrile, who was defense chief during the regime of the late president Ferdinand Marcos, said he has “new evidence” on the operation but did not elaborate. (READ: Cheat sheet: The truths and lies of Mamasapano)

Magalong, who interviewed SAF members, police officials, and military personnel as part of the probe, said he is not privy to the supposed “new evidence” but admitted to have heard additional details after they wrapped up the BOI report. “Hindi ko pa pwedeng banggitin ngayon (I can’t mention it now),” he added.

The BOI was given roughly a month to complete the investigation.

But barely a week later, Aquino said these questions had been resolved and said with finality that it was the SAF who killed Marwan.

“The decision to open it is clearly a legislative decision. We have no knowledge of what the report of inquiry mentioned about Senator Juan Ponce Enrile’s statement but… the people involved have all testified before the Senate inquiry. I am not sure what more we can contribute,” said Lacierda when asked if the probe would revive “anti-administration sentiments” or could possible be an “anti-Mar campaign.”

Magalong said should they be summoned by the Senate anew, they “will be very truthful about it.”

“I’ll be retiring in a year. Wala namang mawawala na sa akin. I’m not running for anything. Tapos na, decided na yung career ko. Ano pang mawawala sa akin (I have nothing to lose. It’s done, this is my career now. What more do I have to lose)?” said Magalong, who has since been assigned to the Directorate of Investigation and Detection Management (DIDM) after his stint as Criminal Investigation and Detection Group (CIDG) chief.

The BOI report, which detailed Aquino’s faults in “bypassing” the PNP’s chain of command and his failure to give Napeñas “strategic guidance” with regards to the ongoing peace process in Muslim Mindanao, reportedly “hurt” the President. – Rappler.com