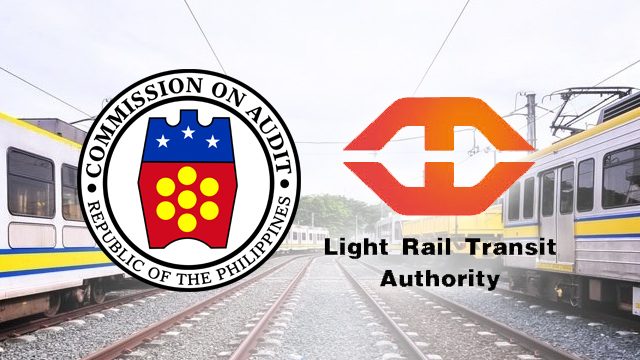 Facebook Twitter Copy URL
Copied
The Light Rail Transit Authority paid employees over P400M from 2007 to 2011, while it entered into questionable deals with contractors that did not deliver

In its 122-page Special Audit Report on the LRTA, the Commission on Audit (COA) said the LRTA failed to ensure that the contractors tapped to maintain the two LRT lines delivered on their commitment to make timely repairs and maintain the operations of the rail system.

According to the audit report, the LRTA granted millions in unauthorized incentives to its officials and employes even as the LRT lines were left to deteriorate because of mismanagement.

COA also questioned the LRTA’s basis for determining the cost of the maintenance contracts, which it said were “not supported with detailed estimates.” The bids presented by the contractors likewise lacked a detailed breakdown of service costs, which were quoted in lump sum amounts.

Despite repeated requests for copies of detailed estimates, COA said none was submitted to its audit team.

Auditors also said that the LRTA later adjusted the contracts, but lacked reference to detailed bid documents and the original contract costs.

“As a general rule, any adjustment in the contract cost should be based on the original bid cost,” auditors said.

Both contractors tapped to maintain the two LRT lines were paid in full by the LRTA, even as they failed to deliver their commitment to maintain a set number of light rail vehicles (LRVs) running, COA said.

The contractors failed to meet their obligations under the contract, routinely missing the number of LRVs it had to keep operational during heavy weekday commuter traffic from January to September 2010.

But despite this, LRTA failed to “make the necessary cost reduction,” COA said.

Auditors also found rampant cases of LRVs being listed on both the train availability report and the preventive maintenance roster.