Advocates on RH budget cut: ‘We’ve let our guard down’ 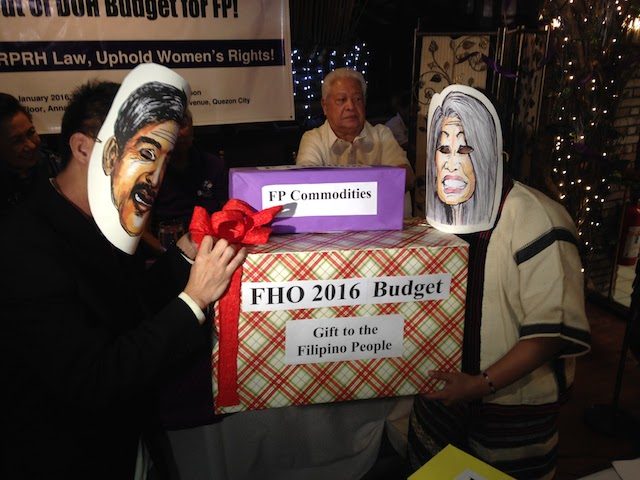 Facebook Twitter Copy URL
Copied
Former Albay representative Edcel Lagman is suspicious of what happened at the bicameral conference committee on the 2016 budget, where the budget cut was made

MANILA, Philippines – The reduction of P1 billion ($21 million) in the 2016 budget for contraceptives served as a wake-up call for advocates of the reproductive health (RH) law that their fight is far from over. (READ: Health chief: No allocation for contraceptives in 2016 DOH budget)

“We have failed to monitor the process in Congress. We have rested on our laurels. RH advocates have put down their guard,” former Albay Representative Edcel Lagman told advocates on Wednesday, January 13, during a press conference of the Purple Ribbon for RH Movement.

Lagman was among the panel of speakers at the forum who denounced the P1 billion budget cut meant for the purchase of family planning commodities such as condoms, pills, and IUDs.

“We cannot always blame the legislators. Let us also blame ourselves. Are we tired? We should not let our guard down until the last battle, and the GAA is the big battle,” Shahani said.

Lagman slammed the cut as “counterproductive” at a time when contraceptive use in the country is improving.

Former health secretary Esperanza Cabral, who chairs the National Implementation Team of the RH law, said two of the biggest RH problems will worsen because of the budget cut: access to effective and modern family planning methods, and teenage pregnancy.

Lagman is suspicious of what happened at the bicameral conference committee on the 2016 budget, where Health Secretary Janette Garin earlier said the cut was made.

He pointed out that the 2016 National Expenditure Program specifically provides for modern and natural family planning supplies – a provision “adopted in toto by the House of Representatives.”

(Ask for a transcript of the deliberations. They can’t show you any because there were no deliberations. What happened was at the meeting of the two charimen, there was horse-trading there.)

He blames the entire Congress, for “violating the very law it has enacted” since both houses approved the bicam report, and the Senate in particular, since it is where the proposed cut originated.

Former health secretary Enrique Ona, who came on Wednesday to support the movement, said he was surprised the cut was only detected when the 2016 budget was already approved.

“Dapat may kausap kang member ng bicam, mino-monitor mo lalong-lalo na ‘yung aspeto ng budget (You should talk to a member of the bicam. You should monitor it, especially the aspect of the budget),” he said.

(Like the sin tax, it’s very important to keep a close watch over the sin tax because it can be diverted in some other ways that can be said is part of the law. That’s why the step-by-step process is very important until the time the President signs it.)

Lagman criticized the explanations of Senators Loren Legarda and Vicente “Tito” Sotto III as “post-mortem justifications” of the cut.

Sotto, a member of the bicam and a staunch RH critic, said the basis for the budget cut is the temporary restraining order (TRO) issued by the Supreme Court on the distribution and sale of implants. The TRO also temporarily prohibits the health department from granting any pending application for RH commodities.

Legarda again justified the cut on Tuesday, January 12, by saying that aside from a P1.67-billion available allocation in the 2016 budget for the procurement of contraceptives, the department still has unobligated funds of P828 million under the Family Health and Responsible Parenting program as of December 2015.

The chair of the Senate committee on finance said this can still be used in 2016, in addition to the commodities procured in the last quarter of 2015 that will overflow until midyear of 2016.

The health department’s savings for 2015 can be another source of funds, Legarda explained, with possible savings that could amount to P8.8 billion, “more than enough to cover the P1-billion decrease.”

“As chair of the committee on finance and oversight committee on public expenditures, I can guide the DOH in constructing their work and financial plan for the whole DOH budget and especially the FHRP, to make sure not a single person is denied access to family planning commodities,” she said. – Rappler.com