Enrile on Mamasapano: Did Aquino do enough to save SAF? 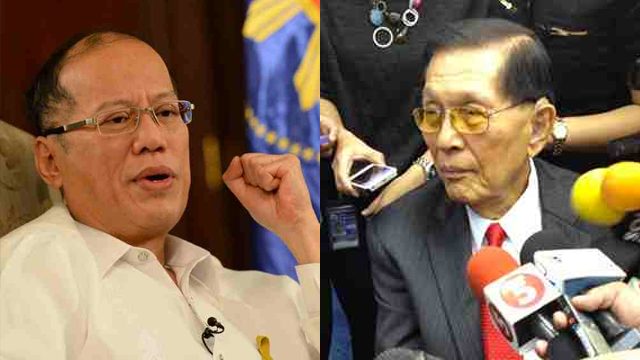 MANILA, Philippines – It’s his “personal knowledge” and supposed “new evidence” that prompted the re-opening of a Senate probe into a controversial police operation one year later, but Senator Juan Ponce Enrile seems to have zoomed in on one issue: President Benigno Aquino III’s involvement in it.

Enrile, who was defense chief under the late dictator Ferdinand Marcos, said the basic question is why 44 Philippine National Police (PNP) Special Action Force (SAF) troopers died during “Oplan Exodus,” a January 25, 2014 operation that targeted bomb makers wanted by both the Philippines and the United States in Mamasapano, Maguindanao.

The Senate will re-open its investigation on January 25.

“Ang question diyan eh, bakit namatay yung 44 na SAF (The question there is, why did the 44 SAF die)?” the former Senate President said during an interview with Radyo Inquirer on Wednesday, January 13. (READ: JPE to Grace Poe: What happened to Mamasapano report?)

While the SAF, the PNP’s elite anti-terrorism unit, neutralized Malaysian bomb maker Zulkifli bin Hir (alias Marwan), it came at a heavy price: more than 60 dead, including Muslim rebels, civilians, and 44 of their own. The operation triggered clashes between police and armed Muslim rebels in Mamasapano.

(I am unaware of anything that the government did to save them, and what did the President do? What was his involvement? He’s the head of everything that happened – he controls the state, he heads the state, he’s the head of government, he’s the chief executive, he’s the top policeman of the country, he’s the commander-in-chief of the armed forces, his powers are vast. What did he do and why weren’t they saved so that at least the casualties would’ve been minimized?)

At the time of the Senate hearings in the first few months of 2015, Enrile was detained at the PNP General Hospital for his alleged involvement in the pork barrel scam.

He even cautioned his allies not to use Mamasapano to hit Aquino.

Enrile was granted bail in 6 months later, in August 2015. But his close aide and co-accused in the pork barrel scam, Jessica Lucila “Gigi” Reyes remains detained at a crowded Taguig jail. The anti-graft court Sandiganbayan rejected last year her plea to be jailed at the PNP Custodial Center. (READ: ‘The Boss’ and Gigi Reyes)

Since the probes ended, the justice department has filed cases against 90 persons tagged in the death of the 35 55th SAC troopers. Raps for the death of the 9 operatives from the 84th Company have yet to be filed.

Aquino’s role in the operation is a sensitive issue, one that administration and his allies have repeatedly sought to downplay.

Top military and police commanders, including the then interior secretary, Manuel Roxas II, were kept out of the loop in the special operation until after two SAF companies were already trapped in the heat of battle.

Purisima, a close friend of the President’s, was at the time serving a suspension order over a supposedly anomalous deal in the PNP. He has since been dismissed from the service because of the botched Mamasapano operation.

Purisima, Napeñas and Mendez gave Aquino a briefing prior to the operation, inside the President’s official residence in Malacañang.

It was during this meeting where Purisima supposedly “adviced” Napeñas to keep the PNP’s officer-in-charge (ret) Deputy Director General Leonardo Espina and Roxas in the dark for “operational security.”

Aquino only addressed the public on January 28, or 3 days after the bloody clash.

Previous probes – the PNP’s Board of Inquiry (BOI) and the Senate committee’s draft report – have scored Aquino for his actions, pointing out that he “bypassed” the PNP’s chain of command and failed to advice Napeñas on the operation’s possible effects on an ongoing peace process in the area.

Aquino has either dodged mention of the Mamasapano clash of the SAF 44 in speeches but has also said the incident would be something he would carry to his grave.

While Exodus was unfolding in Mamasapano, Aquino and several members of his Cabinet were in Zamboanga City to asses the security situation following a car bomb that killed 2 and injured at least 48.

When the Senate first probe the operation in February 2015, Senator Nancy Binay asked Cabinet members present – Roxas and Defense Secretary Voltaire Gazmin – about who informed the President about the clash. The senator was met with silence.

Purisima then also declined to answer the question until after he got clearance from Aquino. The dismissed police general would later submit transcripts of his text message exchanges with Aquino on the day of the operation.

Enrile also mentioned the roles of 2 other groups in the operation: the United States and the Armed Forces of the Philippines (AFP).

According to the PNP BOI’s report, 6 Americans gave “real-time information” during the operation and were situated at the tactical command post alongside top SAF officers. The report also emphasized that no American soldier was on the ground during the operation.

The Senate committee’s draft report, meanwhile, noted that an American attempted to order a Filipino military general to fire artillery, hoping to save the trapped SAF troopers.

Artillery support – and the subsequent lack of it – is another touchy issue in the Mamasapano clash.

The PNP SAF insisted the military failed to provide crucial artillery support as its troopers were pinned down, but the military said they were not given enough information. This sparked heated exchanges between soldiers and cops in and out of the Senate halls.

The AFP has denied this claim, pointing to the lack of proper coordination between the police and military as the culprit.

The timing of the Senate probe’s re-opening has raised not a few eyebrows.

Aquino himself has hit Enrile – and even Poe – for the supposed motivation behind the re-opening of the probe.

(I will not force him to attend but he should never say that I have a grudge against him or this is just about politics. Mr. President, this is my work for the country and there are no exceptions. It doesn’t matter if you’re the president or a janitor or like me, a senator. You will have to answer for your actions. I’ll answer his allegations and if I have allegations against him, he should answer these if he can.) – Rappler.com